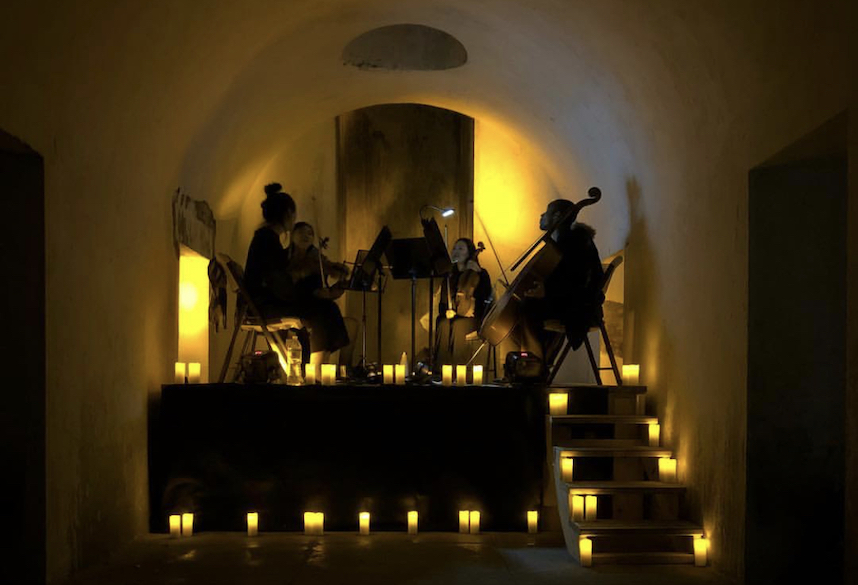 A performance by Death of Classical in the catacombs of Green-Wood at last year’s Nightfall. Photo: Nicole Davis

Last October, nearly two thousand New Yorkers roamed Green-Wood Cemetery during its first Nightfall event, which strung a series of film screenings, intimate concerts and storytellers throughout the nearly 500-acre property. I was one of the many who were mesmerized by the evening’s pop-up performances; a candlelit chamber concert in the catacombs still stands out as one of the most beautiful experiences I’ve had in New York.

But at a few points in the night, I wondered how appropriate it was for me, for any of us, to be wandering among the graves, drinking beer, and generally having a grand old time in the final resting place for the over half a million people currently buried here. Like many, I think of cemeteries as places that prioritize the departed. The living are afterthoughts, invited mainly to pay their respects. Beyond that, I have the same thoughts on cemeteries as your average kid: They’re spooky. My 10-year-old daughter still holds her breath when passing one, for fear of… what exactly?

“I think there are those who have a narrow definition of what cemeteries are,” said Harry Weil, Green-Wood’s Director of Public Programs and Special Projects, speaking directly to my outdated superstitions and perceptions. “And I’m trying to…reimagine what a cemetery can be in the 21st century.” For around a decade prior to his hiring, Green-Wood had engaged the public primarily through trolley and walking tours, the kind of quiet, thoughtful, historical events that you would expect a nearly 200-year-old cemetery to offer. But more recently, he explained, “there was this desire in the institution to really make Green-Wood a cultural destination in New York City.”

Which explains why, over the past few years, Green-Wood has popped up more and more in the city’s arts and nightlife scene. Over the summer, it was possible to see dance performances from Pioneer Works, outdoor movie screenings from Rooftop Films, and this fall, an exhibit from Morbid Anatomy as well as the return of Nightfall. Experiencing one of these events in a graveyard seems novel now, but when you consider the history of modern cemeteries, and Green-Wood in particular,  it’s not so far from its original use. 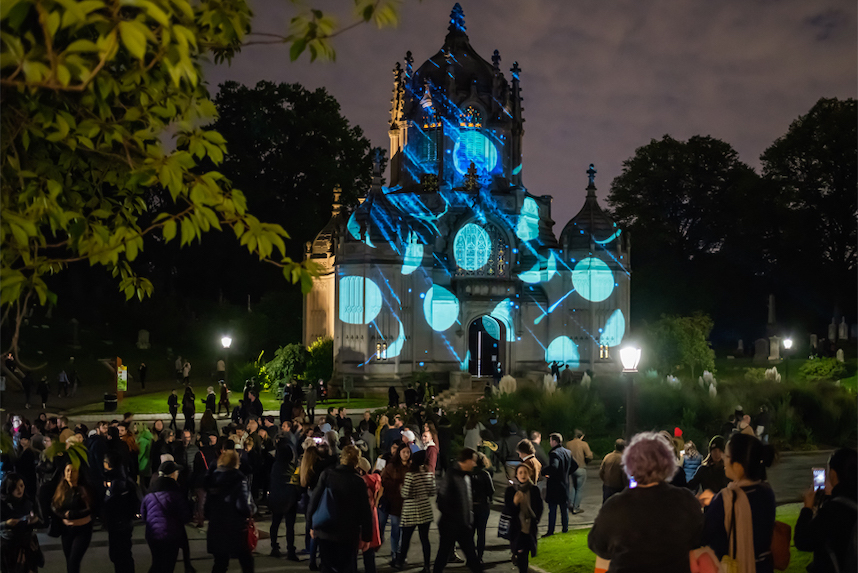 “When we go back to the Victorian period, when [Green-Wood] first opened, this was a public gathering space, it was a museum, it was a park,” said Weil. Of course it was a cemetery too, but given that Green-Wood predates Central Park, Prospect Park, and the Metropolitan Museum of Art, it was New York’s original open space for recreation and cultural exploration, filled with sculptures, mausoleums and monuments designed by revered artists and architects. Hosting the public in this final resting place “is a throwback to the 19th century,” he continued, “where people were more comfortable talking about death; they were more comfortable around death; they weren’t as superstitious around cemeteries; [and] they didn’t have such an uptight propriety about what should and should not be done in a cemetery.” Considering the mortality rates and average U.S. lifespan in the mid-19th century—roughly 40 years—it makes sense why the period is famous for its repression of sex, not death.

Green-Wood, though, isn’t the only cemetery opening its gates to new “audiences.” Hollywood Forever in L.A. has been screening outdoor films since 2002 and is celebrating the 20th anniversary of its epic Dia de los Muertos festival this month, which draws some 35,000 people. Mount Auburn in Cambridge, Massachusetts, the oldest rural cemetery in America, offers workshops like Grow Your Own Oyster Mushrooms along with Edgar Allen Poe readings and Buddhist music and chanting. In D.C., Congressional Cemetery hosts the exercise programs “Dead Man’s Run” and “Yoga Mortis.” And at Laurel Hill Cemetery in Philadelphia, a National Historic Landmark, films, immersive events and themed runs like the “Rest in Peace 5K” are now the norm, alongside walking tours. 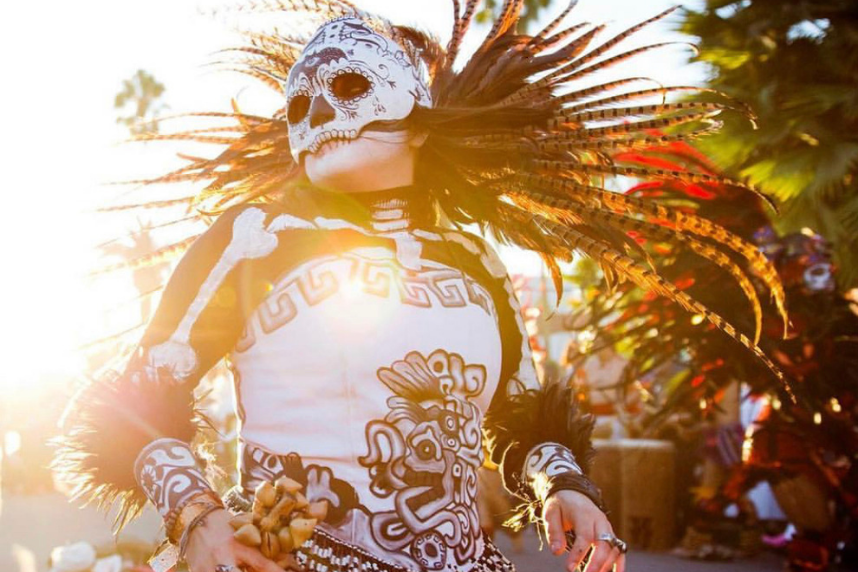 “We just had a concert, and had some people [for whom] this was the first time they visited, and they had an amazing experience,” said Cat Aboudara, the Manager of Programs & Civic Engagement at Laurel Hill. “So then you get an emotional connection with the place, and maybe they’ll think about becoming a member or coming back to more. A lot of people say ‘This is the kind of place I want to be buried, because it’s active.’ ”

Aboudara believes one of the reasons why the cemetery is becoming more popular as a cultural gathering ground stems from a resurgent interest in stoicism, the Greek philosophy whose most famous catchphrase is “Memento Mori,” or “remember death.” Its appeal is a kind of seize-the-day mentality, as if “having death in your mind makes you more grateful for the life that you’re given.”

“I just think it’s a beautiful and peaceful place, too,” continued Aboudara. Its appeal today is no different than when it was seen as an escape and an open-air museum for Philadelphians, who might spend the day exploring its monuments or picnicking, a Victorian-era pastime Laurel Hill allows to this day. Whenever she has experienced any pushback for its programming, mostly on social media, she reminds people of their history, and that it was founded, in 1836, “as a place of rest, respite and recreation.”

Green-Wood on the other hand, prohibits picnics and exercise to help maintain a respectful distance between those attending burials or visiting relatives, and those simply enjoying the cemetery’s scenery. As Weil points out, you wouldn’t want to see someone jogging by during your relative’s funeral. By default then, Green-Wood has become even more of a respite for New Yorkers. “Walk through Prospect Park on a weekend,” he said. “There’s tons of barbecuing, there are dogs everywhere, bicyclists. There’s something special about Green-Wood on a Saturday; it’s quiet, it’s peaceful, it’s relaxing.”

Visiting a cemetery at night can be even more appealing, and for the few complaints Weil has received since Green-Wood began hosting nighttime events, he explains that their timing—well past visiting hours—places the same respectful distance between its daytime and after hours guests. For the foreseeable future, Green-Wood will remain an active cemetery, given the number of gravesites still available to future generations of families who have purchased plots here. But at some point, its initial purpose will cease to exist. “I would say the cemetery is thinking that eventually we will run out of space to bury people, because there’s a finite area of land,” said Weil.

Reimagining Green-Wood as a cultural site now is a kind of insurance for its vitality going forward, and at Nightfall, which returns this weekend, the transportive, artistic side of the cemetery emerges in full. “We have all these amazing partnerships,” said Weil. “And so you can come over the course of our season and experience something Pioneer Works is working on, or a screening chosen by Rooftop Films. But this is the night that showcases the best of Green-Wood and the best people that we get to work with.”