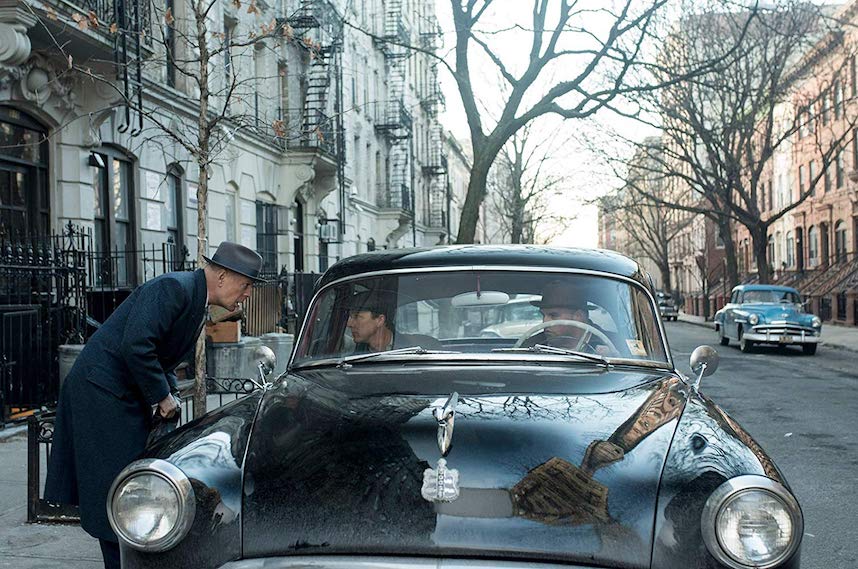 Though set in a different era, the opening scene of ‘Motherless Brooklyn’ is the only one similar to the book. Image: Warner Brothers

Nearly everything about Jonathan Lethem’s 1999 novel, Motherless Brooklyn, has been changed in Edward Norton’s film adaptation, which opens in theaters this weekend. But the most improbable, endearing detective in modern fiction, Lionel Essrog, remains. One of four orphans groomed by a low-level mafioso named Frank Minna, Lionel is as motherless as the rest of the “Minna Men,” but he finds a father figure in Frank. Abandoned again when Frank is murdered, Lionel sets out to find the killer. It’s a perfect set up for a private eye, but Lionel is the least likely person for the role.

From the first page, we are thrown into his uncontrollable urge to bend words, touch things, and blurt out his thoughts, the closest most of us will come to understanding Tourette’s. Creating a detective who can’t keep his trap shut was a genius move, and Edward Norton, who wrote, directed, produced and starred in the film—along with Bruce Willis, Willem Dafoe and Alec Baldwin—was obviously smitten. It gives the story a built-in, running joke. But the book is as much about Lionel’s affliction as it is about Lethem’s own relationship with writing, and writing about Brooklyn. Twenty years after its publication, I chatted with the author, a professor at Pomona College, about his breakout best-seller. Here are a few takeaways.

Lethem’s book—his fourth, and his first set in New York City—is situated in the late 90s, on the cusp of Brooklyn’s transformation from Manhattan’s striving sibling into the coolest borough in NYC. The nascent gentrification of neighborhoods like Boerum Hill and Cobble Hill is reflected in Lionel’s attempt to fly under the radar as a white kid in a predominantly black school, an experience Lethem would flesh out in Fortress of Solitude. Other details, like a lone pub that’s a clear stand-in for the Brooklyn Inn, situate the book in the midst of the neighborhood’s change, just as Smith Street was becoming a strip of bars but well before Gowanus was a thing.

Lethem had just returned to Brooklyn after living in California for 10 years, and he was writing about his native city for the first time.

“I see it as a hinge book. Motherless Brooklyn is the entrance out of the …more narratively concise, more genre-inflected work of the first part of my life into these more kind of sprawling and more reminiscent…books about New York City”—novels that include Fortress of Solitude, Chronic City, and most recently, Dissident Gardens. Motherless Brooklyn “is kind of a valentine. I was falling back in love with New York City and the book is a little bit aloft on that energy.” 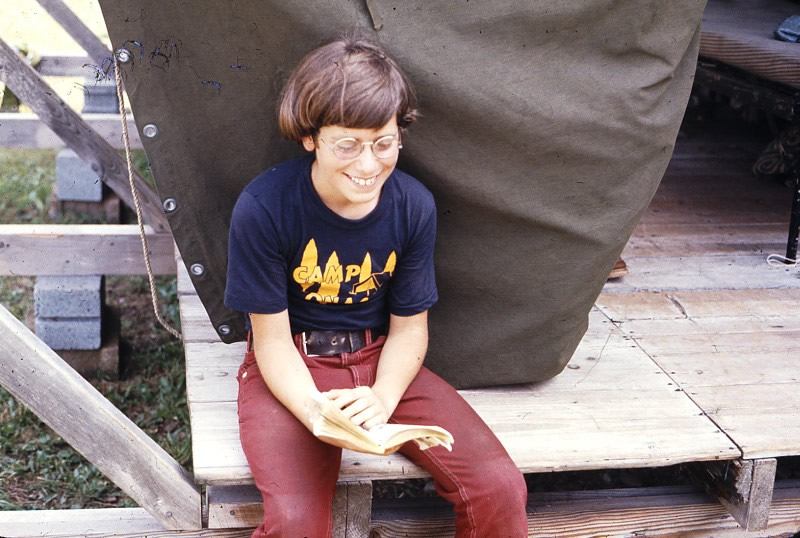 A childhood photo of Jonathan Lethem. “I’m twelve, living in Brooklyn, but camping in the Catskills.” As for the book in his hand, he said, “It’s probably science fiction… Frederik Pohl and C.M. Kornbluth’s ‘The Space Merchants,’ let’s say.” Photo courtesy Jonathan Lethem

Tourette’s is a condition New Yorkers can relate to.

Lethem learned about Tourette’s Syndrome from the 1995 Oliver Sacks book, An Anthropologist on Mars. As a writer, the symptoms struck a chord. “I was like, ‘Oh my god, it’s all about the inside of the head and…to have it is to be constantly enmeshed in unexpected [social situations]. You walk through life as a ripple in the social field.’ And that’s really, really rich for fiction.”

He knew then that he was going to have a character with Tourette’s, and he researched the syndrome, watching and re-watching the documentary Twitch and Shout. On a personal level, though, learning about the condition also put into perspective his feelings about language and his identity as a New Yorker in California.

“Cut to I’m suddenly back in my home life of Brooklyn that I’d abandoned. I’d been living in the Bay Area for 10 years. And I was having all these responses to hearing the street language of the city and realizing that my persona, my style was more like a New Yorker and that was part of the kind of low level but standing discomfort in my California life. I was like, ‘I’m a little too loud, I’m a little too abrupt, I stand too close to people, I gesticulate.’” 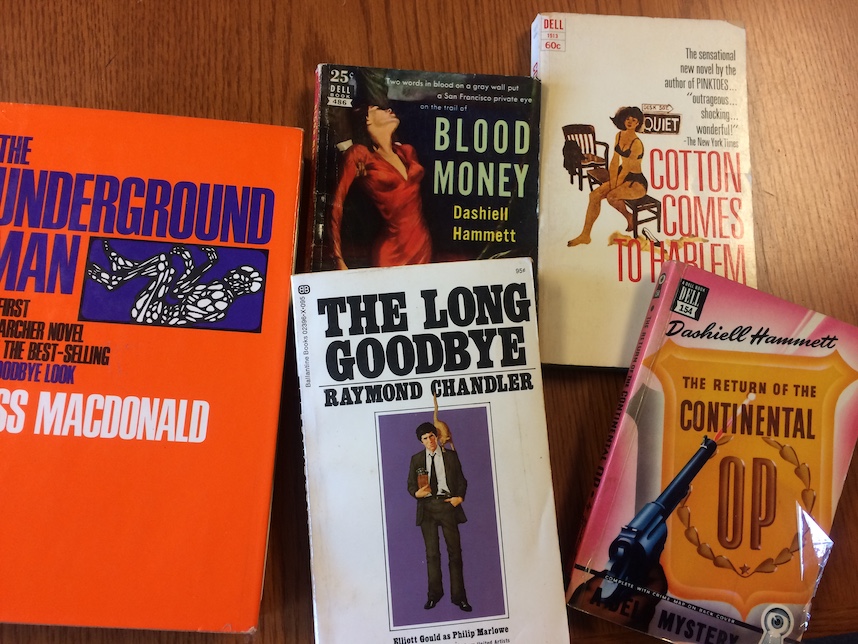 A few of the books in Lethem’s library that informed ‘Motherless Brooklyn.’ Photo: Jonathan Lethem

Lethem is a diehard fan of detective novels.

Lethem didn’t randomly decide upon Lionel’s occupation. A fan of noir novelists like Raymond Chandler and the golden age of detective fiction, it’s a genre he wove into his first book, Gun, With Occasional Music, Motherless Brooklyn, and most recently, The Feral Detective.

“The one thing that character always has is verbal mastery,” said Lethem of the classic private eye. “They walk into a room and whatever powers they’re facing, what they do have is this sublime capacity to encircle people with their wit, with their sarcasm, with their interrogation. That’s sort of what being a hard-boiled detective is, is to have verbal control.”

Lionel’s affliction compromises this superpower, of course.“That joke just carried the book in a way.”

Having your book made into a film means letting go of the creative process.

Surprisingly, Lethem had no input into the book’s translation from the page to the screen, and he preferred it that way. “There are so many things about the way a book works and activates in the reader’s mind that have no way of being turned simply into [a film]. I’m not a filmmaker, but I have just enough dabbled in trying to make screenplays and I know what kind of resistance you encounter in the movement from one form to the next…[Filmmakers] have to change things, they have to make reductions and they have to make conflations and compressions, and that’s really hard to do. And all the harder if someone’s getting in the way, saying, ‘Ooh, ooh don’t change that, that’s my favorite thing.’”

The best film adaptations are the ones that are not true to the book, anyway.

Norton rewinds the era in which the story is set to 1957, a visually hypnotic regression that takes us from dilapidated Fort Greene brownstones to protesters railing against plans for a major road through Washington Square Park (Robert Moses actually wanted this to happen). In a moment of real cinematic magic, we even get a glimpse inside the original Penn Station. Norton changed the time period to counteract the very literal interpretation of Lethem’s neo-noir characters, who would seem like cartoonish throwbacks in a novel is set in the late 90s.

“I can get away with it on the page, because the page has a magical power of fusion where my Brooklyn is the 1990s and these weird, dorky, wannabe detectives and criminals can sort of enact their story on those contemporary streets. The alchemical quality of the written word makes it okay. But if you start photographing that, it’s going to look like Halloween, like they’re dressing up.”

Norton also wrote a wholly new plot. In the book, the bad business that cost Frank Minna his life involves (oddly) Zen Buddhism and Japanese businessmen. In the film, Norton switched the equally far-fetched intrigue to the hidden family history of a Robert Moses figure uprooting communities of color in his plans for the city.

“It’s as if the book was a dream the movie once had and was trying to remember it, you know? It’s so oblique a connection,” said Lethem. Which is why, in Lethem’s mind, it works.

“As a movie goer, I really like films that are independent of their sources.” To him, Blade Runner is another example of a “sublime and mysterious relation, like the two things have 35% DNA in common or something.”

Photos of Lethem taken during the period he was writing ‘Motherless Brooklyn,’ courtesy the author.

A few details in the book feel like stepping back in time.

In the novel, a car service called L&L serves as the front for the Minna Men. Ubers and Lyfts have since replaced the once ubiquitous business, but for anyone who still remembers calling for a car, Lethem includes a few nostalgic details, as when Lionel catalogues the prices from Bergen Street to various neighborhoods: “Five bucks to the Heights, seven to Park Slope or Fort Greene, twelve to Williamsburg or Borough Park, seventeen to Bushwick.” (He leaves out the estimated wait time, no matter what neighborood you were calling from: Five minutes.)

It would be hard to find a similar, believable storefront for the Minna Men today. “I mean, first of all,” Lethem said, “New York has gotten too expensive [for] spaces that are actually guys hanging out and not really working. [On] Atlantic Avenue between Hoyt and Bond, these unbelievably deluxe streets now, the plumbers would rent an empty storefront just to store their tools in because no one was doing anything with those buildings.”

That kind of wholesale change would have come as a surprise to Lionel—to him, Brooklyn is immutable:

“Ordinarily I savored Brooklyn’s unchangeability, the bullying, Minna-like embrace of its long memory,” he remarks at one point. “At the moment I yearned to see this neighborhood razed, replaced by skyscrapers or multiplexes. I longed to disappear into Manhattan’s amnesiac dance of renewal.”

Naturally I asked how Lionel, or Lethem himself would characterize present-day Brooklyn, but the author passed. “I’d have to write a whole new novel to account for the way my feelings—and Brooklyn—have evolved since The Fortress of Solitude and Motherless Brooklyn.”