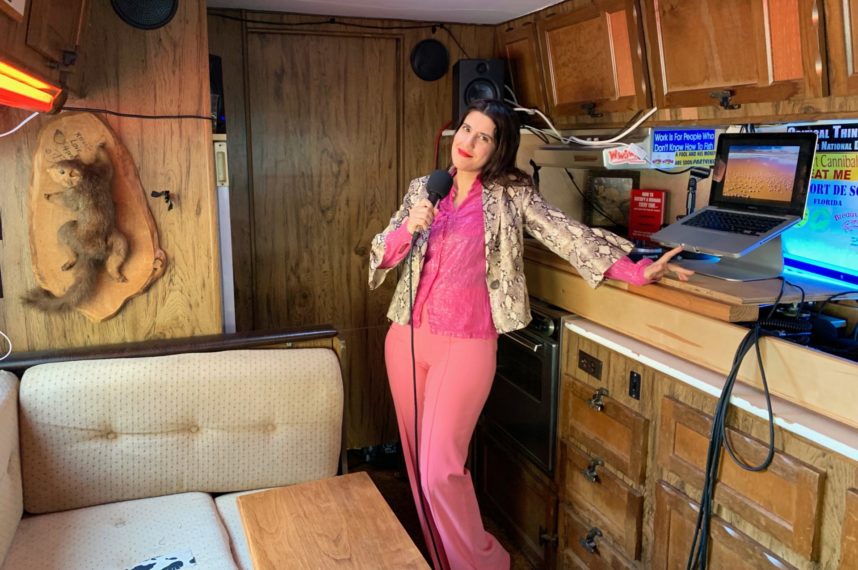 On a triangle of Bushwick blacktop, under the rumbling elevated track of the M-train, sits a vintage, orange-striped Swinger RV. On the brick wall behind it, KPISS.fm is painted in canary yellow and shocking pink. This stationary vehicle is the shag-carpeted home of a 4-year-old internet radio station where pretty much anything goes. KPISS bills itself as “the golden stream.” 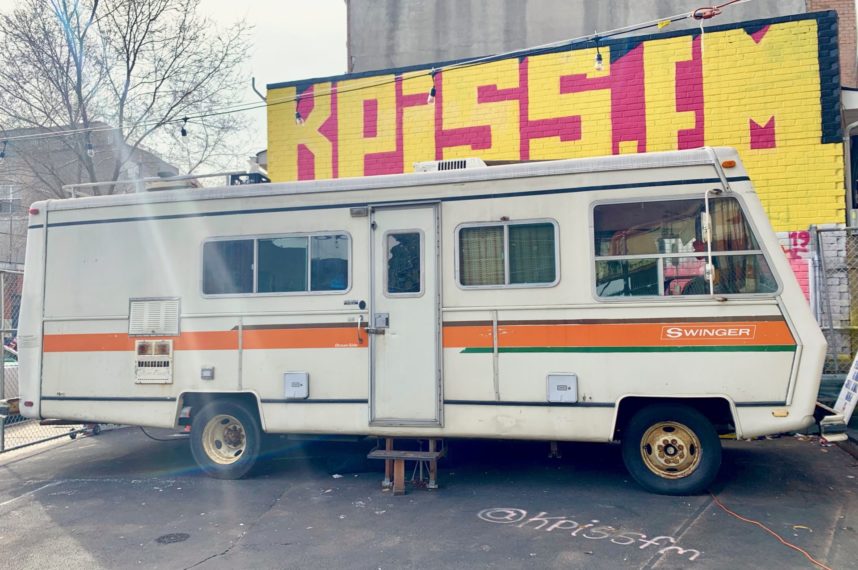 KPISS founder Sheri Barclay would consider rebranding her streaming station if she expands. For now, though, it’s “the golden stream.” Photo: Kara Zuaro

“I’ve designed my dream studio. There’s nothing here that isn’t a total fantasy of mine,” said founder and station manager Sheri Barclay, glowing against the wood-paneled interior in a snakeskin blazer over a hot pink top and matching pants. The RV’s kitchen area held a mic and a laptop, while the remaining surfaces were mostly set aside for taxidermy—a glass-eyed raccoon, an extremely large stuffed squirrel, a cute li’l dead chipmunk rowing a canoe. A pair of fuzzy orange dice dangled from the rear-view mirror and a Garfield clock tictocked on the dashboard. The station’s name might cause visitors to brace themselves for the place to smell like urine, but no, it was totally welcoming, clean and warm. 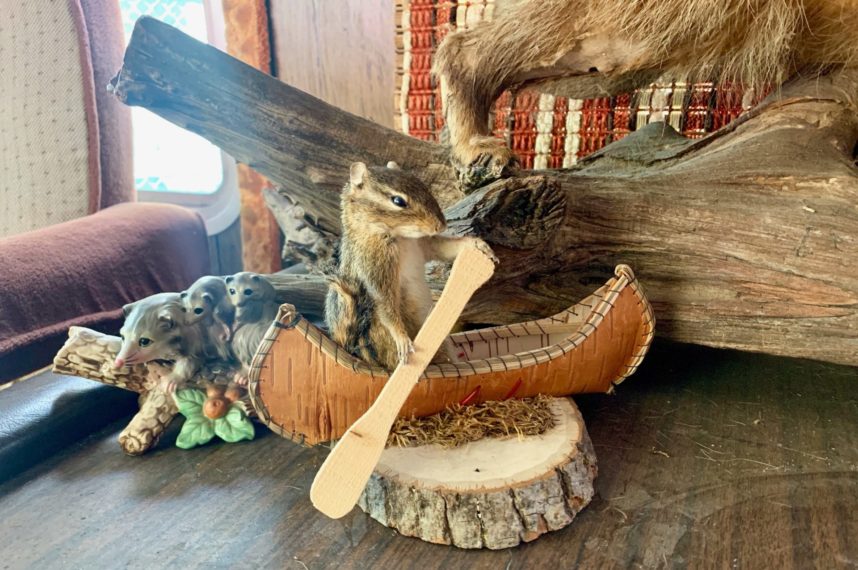 “There’s nothing here that isn’t a total fantasy of mine,” said Barclay. Photo: Kara Zuaro

Some of the weekly DJ’s have been around for the station’s entire existence, but new personalities are always welcome, and Barclay has recently started inviting local and touring bands to come in for one-off DJ sets. She notes that she’s not looking to do traditional interviews. “I just want to know what they’re listening to—that’s super fun for me,” Barclay explained and mentioned how much she’s looking forward to a visit from fellow Canadian Jay Ferguson of Sloan on February 20. (His set will be broadcast live at 2pm, and it will be archived for future listens.) 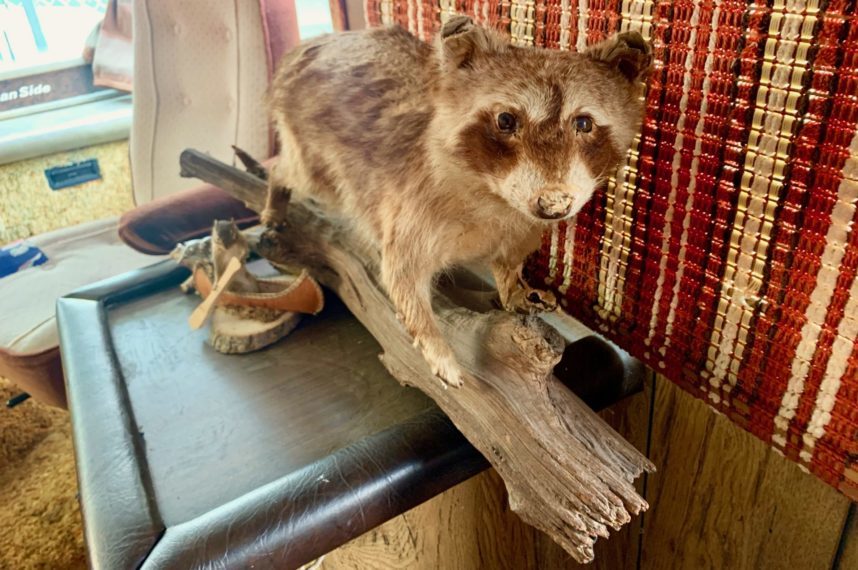 According to its “about us” page, KPISS is “like NPR on crack.” But how does it compare to New Jersey’s listener-supported WFMU, which sounds more like college radio and bills itself as “the longest-running freeform radio station in the United States”?

Harrison King, who DJs on both “Tales From The Ripping Post” on KPISS as well as WFMU’s “Nowhere Places,” says, “At KPISS, the station’s atmospherics definitely set it apart. Being inside a crusty RV for a couple hours playing music does something funny to your brain. Different stores or food trucks pop up in the RV’s lot, and that’s really cool as well. There were some nights over the summer where there’d basically be an impromptu party in the lot. Having the space attract that kind of attention is true to the freewheeling spirit of KPISS.”

At present, KPISS shows run from 5pm to 1am on weeknights and 10am to 1am on weekends, with a chat room for listeners to check in with the DJs. Barclay notes that point of radio is to listen to it live, but all the shows are archived and searchable by genre (from post punk to hip hop to comedy), by artist, by song title, and even by the DJ’s former college radio station. 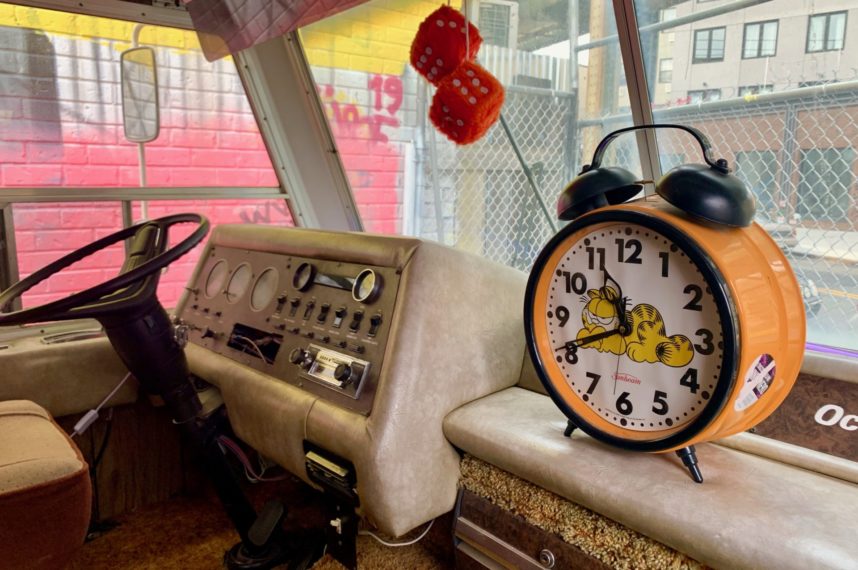 Barclay does not actually live in the KPISS RV. Photo: Kara Zuaro

During an off-air hour prior to this interview, I searched for one of my own favorite bands, Mountain Man, and came up with an episode of “Passionate Kisses.” In a soothing voice, DJ Kelly P. Kisses introduced the show like a yoga instructor on a bender:

“You’re in for some soft, gentle tunes tonight. So, lay back on that shag rug, breathe out and exhale of relief, sadness, mourning, gas, really anything that you’re holding on to. Join me on this musical journey. Here’s ‘Houses’ by Elyse Weinberg. I love you.”

A nerdier DJ might tell you that “Houses” features Neil Young on guitar, and comes off a 1968 self-released record that was unearthed and reissued by Orange Twin in 2001, and then again by Numero Group in 2015, and then more recently covered by Courtney Barnett. But Kelly P. Kisses isn’t a nerdy DJ—she’s a beloved Brooklyn tattoo artist with a weekly radio show. This lady’s just here for the tunes. The show moves through a mix of familiar artists like, Boy Genius, Joni Mitchell, Angel Olsen, and Rilo Kiley, plus a track called “Camomile Tea” [sic] by Nina Cobham that I hadn’t heard before. In a catchy chorus, she sang softly, “Please be patient with me, I know that I’m a handful,” and I added the track to my Spotify playlist, noting that it’s a one-off single from 2018. No algorithm could’ve found this for me. 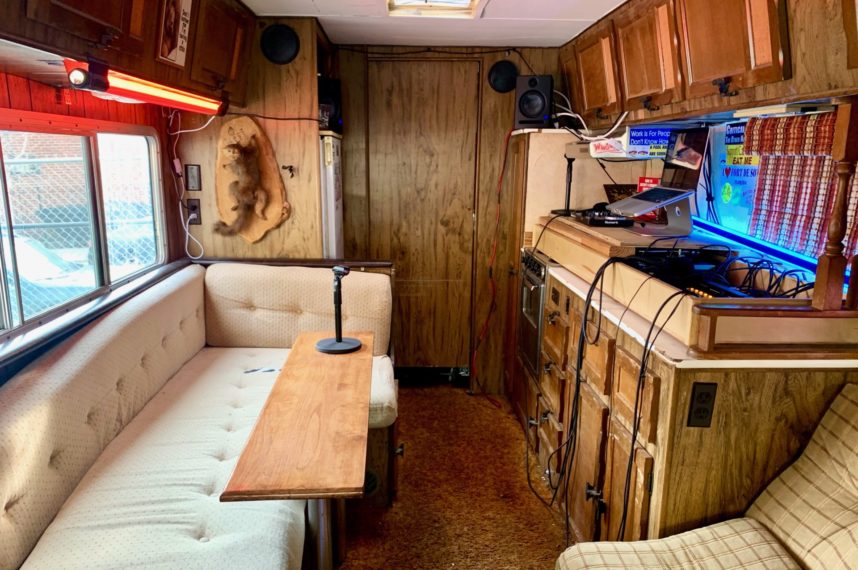 However, when I later spoke to Barclay, Spotify started to seem like the corporate enemy of indie internet radio. Spotify makes it feel like you have your own audio platform to share playlists and podcasts, but they’re making money off your efforts through subscriptions and ad sales. “We’re all kind of working for Spotify, if you think about it,” Barclay explained. I hadn’t really thought about it before, but you couldn’t post a DJ set as a podcast, even if you wanted to. Podcasts are downloaded, making it illegal to use music in a podcast without proper licensing and fees. So you can’t hear KPISS (or any other streaming radio station) on Spotify—you can listen on the KPISS site through their custom-built Mixcloud platform. 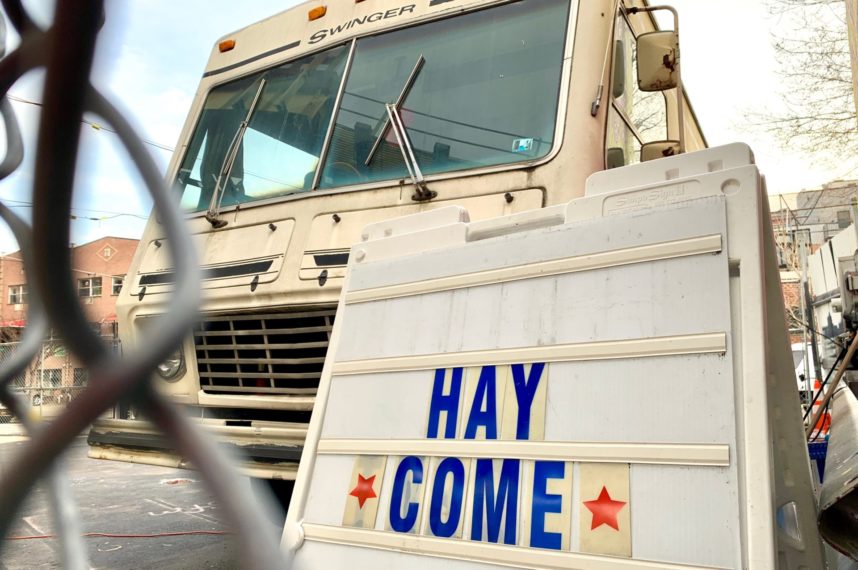 In the summer, impromptu parties pop up in the KPISS lot. Photo: Kara Zauro

At KPISS, there are no ads, no sponsorships, and in case anyone was wondering, Sheri Barclay has nothing to do with Barclays Center. The station uses Patreon to manage its lean, $5 a month pledges. Some of the DJs welcome listeners to karaoke get-togethers at local bars, and they occasionally throw parties to raise funds, but ultimately KPISS is an artists’ collective. The DJs pay membership fees that are just enough to cover rent, taxes, electrical and internet bills, and whatever else is necessary. Barclay has a day job and her own rent to pay. (She works at the Chelsea Trader Joe’s and no, she does not live in the RV.) 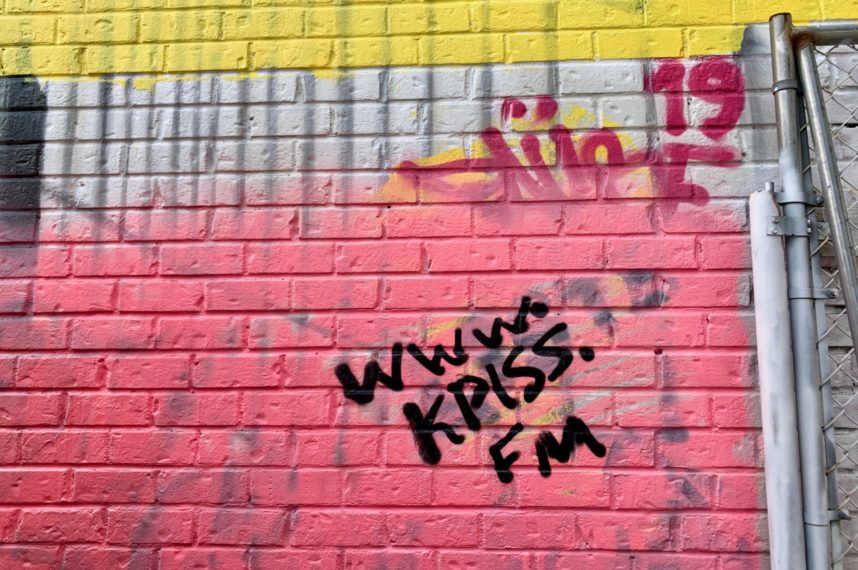 “People talk the talk about a creative, open, safe, space, but this really is one,” Barclay said. KPISS is like a punk house: righteous and inclusive. The station’s name, as funny and irreverent as it is, doesn’t really express Barclay’s warm, welcoming nature. Barclay is considering rebranding if she expands her streaming radio empire, and possibly turns it into a non-profit organization. Brooklyn is a pretty expensive place to rent a corner of pavement, but it would be way cheaper to replicate the station (in an RV or elsewhere) in Austin, Chicago, Athens, or even LA. But what would she call it?

“I might just call it Radio Sheri,” she laughs, “because that’s fucking what it is.”

On February 23, the KPISS show Personal Matters is hosting a night at Heaven or Las Vegas at 7pm. To listen to KPISS, support the station, contact Sheri Barclay, and/or find out more about starting your own show, visit KPISS.fm.

Note: This article was updated to accurately reflect KPISS’s funding and operations.