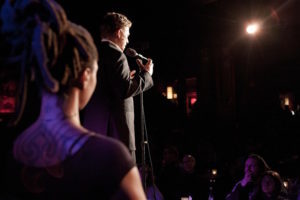 I know that we’re in the February doldrums, but I’ve been watching so much TV lately that I think it’s starting to awaken some heretofore unseen antisocial tendencies within. It all came to a terrifying and depressing head when I stayed up until after 4am alone one night last weekend because I couldn’t stop watching a Netflix show called Spinning Out which is about a family full of Olympic hopeful figure skaters and bipolar disorder and also is, objectively, garbage. Suffice it to say, it’s time for me to make more of an effort to get out of the house, even on weeknights, so instead of holing up on my couch this Monday night I will instead venture out into the world to The Moth StorySLAM at The Bell House. Starting at 8pm, participants will take the stage to tell five-minute stories relating to the evening’s theme: feats that have tested their mettle, sanity, or patience. Tickets are just $15, which is a small price to pay for my reentry to society.