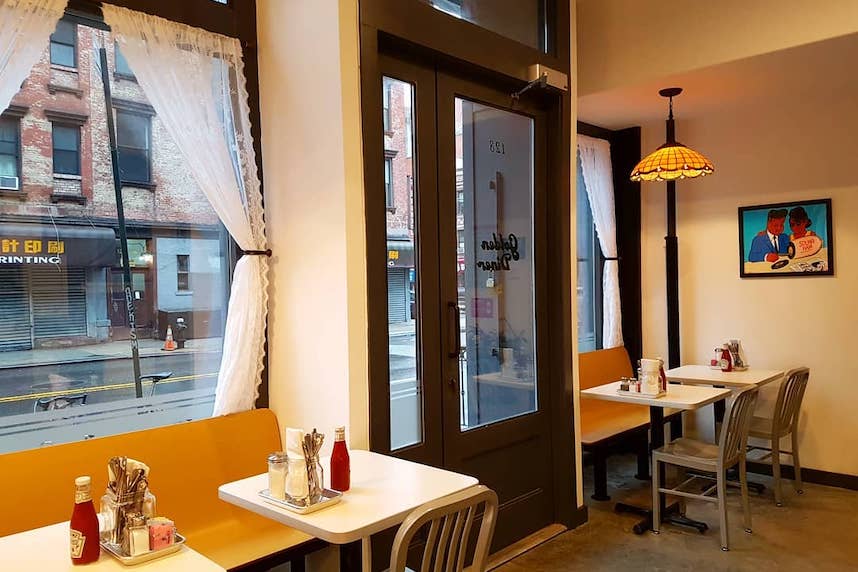 Asian-influenced modern diners are having a moment, but the buzziest of all is Golden Diner. Photo: Golden Diner

As I wrote in this space last month, modern diners are having a moment. But because the law of foodie-ridiculousness dictates that every NYC food trend must beget an even more specific sub-trend, modern diners with Asian influences are having a moment, too. Williamsburg recently welcomed Diner by Izakaya, inspired by Japan’s family-friendly, diner-like famiresu restaurants, and serving lotus root burgers plus mentaiko cream ramen spaghetti. Meanwhile, the noodle master behind Ippudo just opened Karazishi Botan, a “neighborhood ramen diner” on Smith Street, and over in Manhattan the team behind the excellent Uncle Boon’s just debuted Thai Diner. But the spot that’s been buzzed about most is Golden Diner on the far eastern edge of Manhattan’s Chinatown, where Sam Yoo, a Queens-born Momofuku Ko veteran, is serving classic NYC diner fare with some Chinese, Korean and Japanese twists. 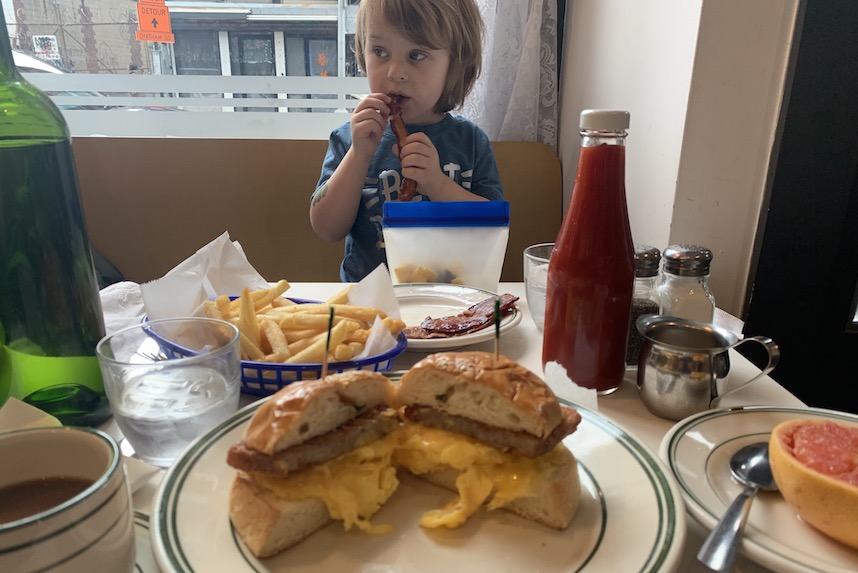 My toddler taste-tester and I set out on a Tuesday during the midwinter school break to see if Golden Diner would work for a hungry parent and kid. The simple space is very classic diner-y (a long white counter with swivel stools in front of the open grill-kitchen, plus retro Tiffany lamps above the handful of tables). We arrived at 11:30 and found it half-empty and welcoming—another family was just finishing up their meal, and there were plenty of open seats. We arrived just in time because by noon the whole place was packed. (They do take reservations if you aren’t dining with the world’s most petulant walker and have the ability to plan out approximately what time you might arrive places). I think my little guy is starting to understand what diners are all about, because as soon as he sat down he announced, “I want French fries and I want bacon.” I put in his order along with a Chinatown Egg and Cheese Sando to share, plus a half-grapefruit because, you know, health.

The nouveau diner fare here isn’t as over-the-top as it is back in Brooklyn at MeMe’s; instead the spins are subtle. The cheeseburger comes with a spicy mushroom kochujang sauce; the club sandwich is made with thin and crispy chicken katsu topped with red cabbage; the coffee cake flavored with green tea. Oh, and about that breakfast sandwich: it’s the best one I’ve had in years. The fluffy eggs are appropriately packed with tons of gooey American cheese, but what makes it hit is the slight sweetness of the soft, sesame scallion milk bun and the awesome crunch of the crispy-all-around hashbrown patty. The sweet–salty-crunchy juxtaposition made me a little angry that every breakfast sandwich doesn’t come with hashbrowns on it, and as I sit here writing this a week later, I’m definitely getting hangry about the fact that I’m not having one of these for breakfast right this minute. It’s that good. 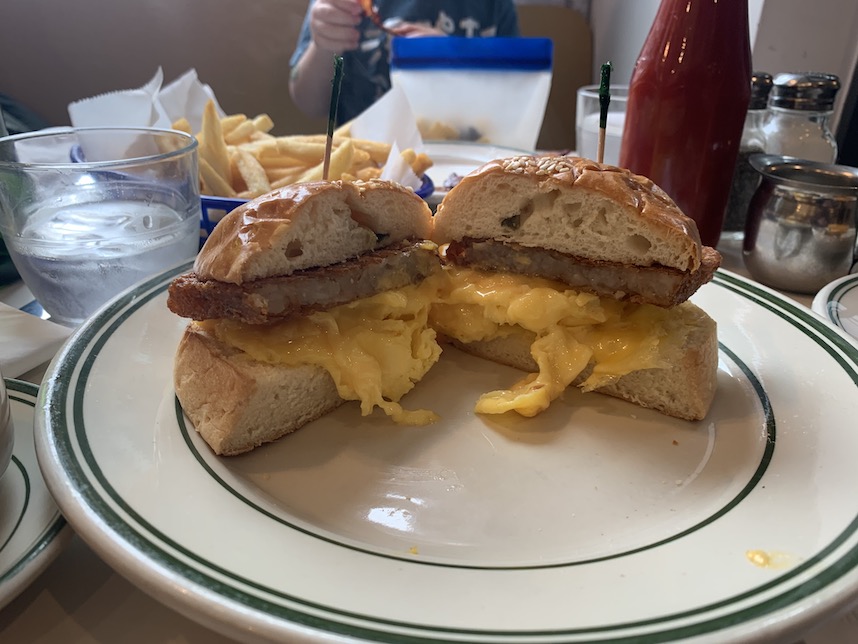 As for the kid: I managed to sneak a couple bites of egg into his mouth in between mouthfuls of his own order (so that I could tell his mom he had more than just bacon and French fries for lunch). I got a hard no on trying grapefruit. Overall, this place was exactly what I wanted it to be: a cut above classic diner fare, but without sacrificing everything we love about diners: quick service, roomy seats, free refills on coffee, and generous servings of fries. The crowd was diverse—young people and families, definitely some foodie tourists, but clearly neighborhood regulars, too. No problem at all with taking a kid here, and the chef even came over at the end of our meal to ask if we liked everything. The prices, not surprisingly, are a tick up from classic diners ($9 breakfast sandwich, $15 cheeseburger).

Verdict: Golden Diner is definitely worth leaving Brooklyn for—an excellent spot for breakfast before kicking off a day in Chinatown, especially when businesses there need all the support they can get amid the coronavirus panic. It is, after all, no riskier than anywhere else in the city.

Afterwards we moseyed over to Chinatown Fair, the formerly seedy arcade my brothers and I used to beg our parents to take us to after family dinners in Chinatown. I was disappointed to see the famed tic-tac-toe playing chicken is no more, but it’s still a good place to kill an hour with a kid of any age. Then we were on to Fay Da bakery for a giant almond cookie before swings-and-slide time at the Hester Street playground. 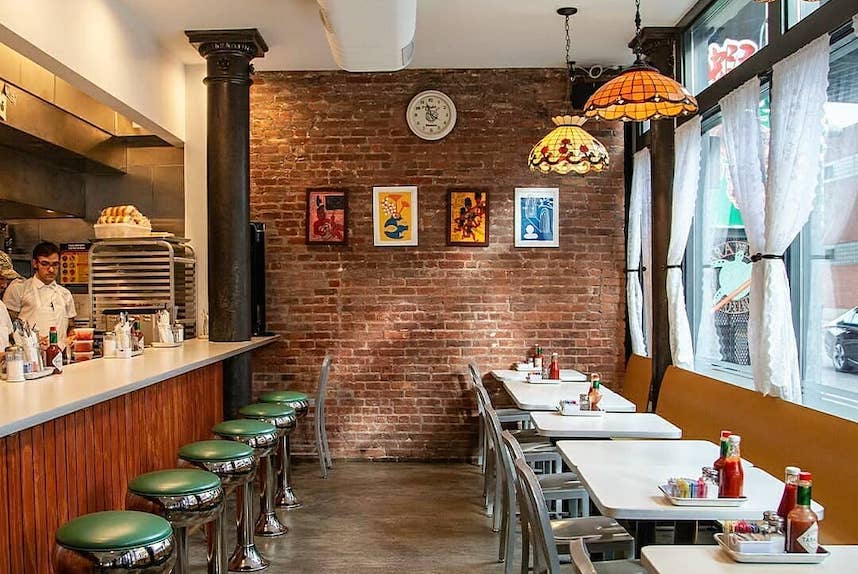