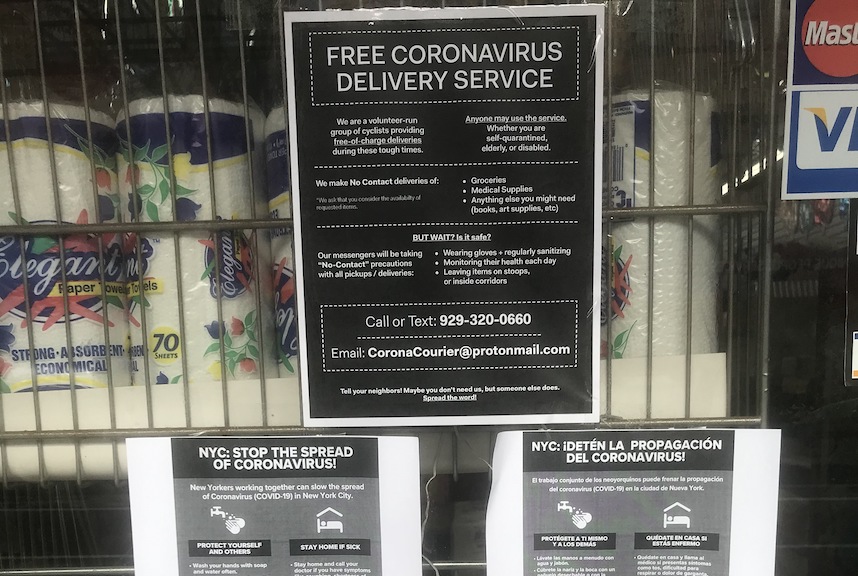 Sasha Verma was already wondering how she might be able to help others during the coronavirus outbreak when she saw a tweet from Liz Baldwin. On March 13, the librarian announced her mutual aid project, Corona Courier, and instructions to email “if you want to be involved and are a cyclist or just someone who can do errands for people.”

The 29-year-old software engineer, who lives in Bed-Stuy, responded to Baldwin’s call for volunteers and quickly became a part of the group effort, starting a Slack channel to communicate requests with couriers.

There is no social media account or site for Corona Courier, which pairs volunteer bike messengers with New Yorkers who are elderly, immunocompromised, sick or self-isolating and in need of groceries or medications. But between social shares from volunteers, a New York Times article and flyers posted around neighborhoods with their email, coronacourier@protonmail.com, and Google Voice number, 929-320-0660, the service’s ranks swelled from an initial group of roughly 15 last Monday to 174 volunteers as of Saturday.

The group is making free deliveries throughout the city aside from Staten Island at the moment. “It’s been completely dependent on where our volunteers are coming from…The majority of people are in Brooklyn,” says Verma. “All of us Brooklynites like to bike!” 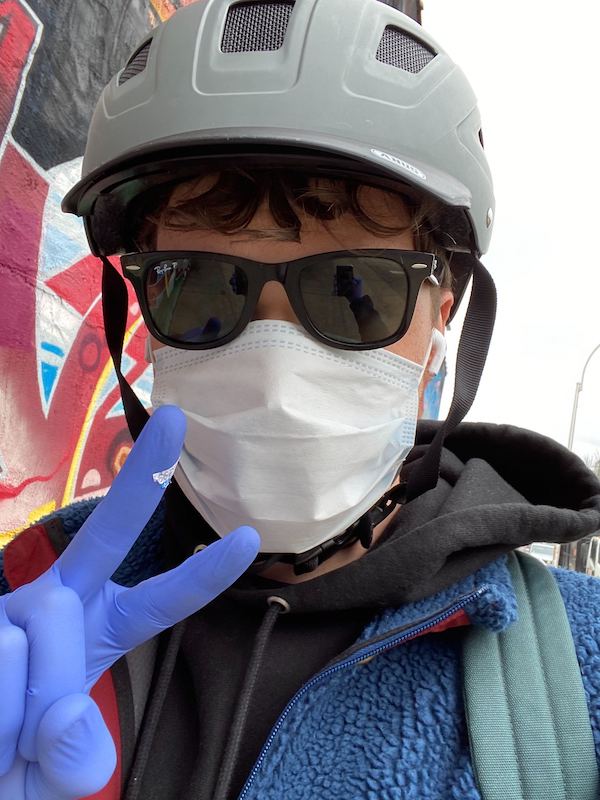 Corona Courier messengers are required to wear gloves and masks, even if they have to make their own. Information on where to find these supplies is shared among volunteers. Photo: Corona Courier

The process of pairing couriers with recipients can be time-intensive, though, and the information exchanged is private. Verma is still employed, and can’t dedicate the time it would take to improve the manual system, but welcomes anyone with experience to help automate the process. She envisions an app like Rover.com.

Most of the requests coming in are for groceries and pharmacy pickups. “Sometimes we get a weird request—someone asked for help with their cat,” she said, which volunteers, who deliver only to stoops or leave items inside vestibules, can’t do safely. For further protection, they are required to wear gloves and a mask, even if they have to make one themselves.

Corona Courier gets the recipient’s address, the best way to contact them, and the list of sundries they need. If the items have not already been paid for, recipients are asked to send money digitally through an app like Venmo.

“So many volunteers have been laid off or don’t have a job. We don’t want anyone to be losing money,” says Verma. Those who cannot afford their necessities can access funds raised by a sister mutual aid group, Abolition Action, which has created a grocery fund. Corona Courier is also in the process of partnering with some food banks.

Most of the grocery items are relatively easy to find; it’s the hand sanitizer and thermometers that are in short supply. “People have been paying $30-$40 bucks for a thermometer,” she said.

So far, she estimates that the service has fulfilled at least 70-80 orders.

“It’s been a really heartening experience because everyone is stressed out, and worried about themselves, their families,” says Verma. “But so many are recognizing how much vulnerable populations are being affected by social distancing and want to help out with the skills they have.”