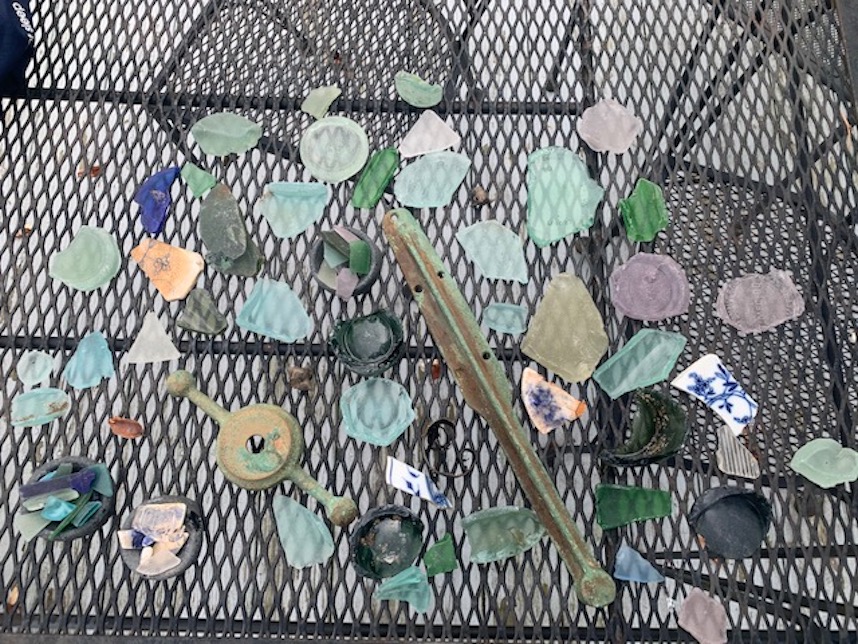 What oddly comforting habits have you picked up in quarantine? Photo: Kate Hooker

It’s Friday, everybody! Around these parts, during this particular time in human history, this means pizza night, which involves my sister and I driving to the next town over for curbside pickup of a couple of pies and a growler at the same spot every week. It’s certainly not the best pizza I’ve ever had in my life, nor what would be considered an exciting Friday night plan by pre-COVID standards, but it’s the tradition we’ve got now and it feels important to punctuate the shift from all-day Zoom meetings to a couple of days of glorious nothing on the calendar. Do you have new Friday night routines? Or other ways you’ve adapted to this new way of life and its high potential for monotony? A friend who is part of a large, relatively spread out Indian family told me that they’ve set up a standing Sunday morning Zoom cooking class/brunch where her mom or one of her aunts teaches everyone how to make a traditional Indian dish (grocery lists having been sent out a few days before) and then they all eat it together. I love this idea, not just because I’d kill for easy access to that kind of culinary expertise, but also because having something hands-on to do together makes the prospect of a social video chat much more appealing.

Last Friday night, my mom and sister I, full of pizza and beer, watched about 8 episodes of Normal People on Hulu because we couldn’t stop. Yep, it was a little awkward given the depth and breadth of the sex scenes, but we loved it so much we didn’t care, and if you haven’t gotten into it yet a polar vortex on a mid-May weekend feels like the perfect time to start. To read about that and a handful of other streaming options we recommend, check out our May Culture Essentials post or this one about theater and art spaces who have put content online. We’ve also been watching The Last Dance, ESPN’s Michael Jordan documentary, rather obsessively, and we also watched Jerry Seinfeld’s new comedy special on Netflix just to bring the 90s nostalgia to a fever pitch. Tonight, a 9pm screening of John Wick, hosted by Jamie Lee Curtis as part of the Lionsgate Live! A Night at the Movies series, sounds like just the thing, and tomorrow, Brooklyn Brainery has an ice-cream making class I’m planning to attend, having impulsively thrown my ice cream maker into an overstuffed Ikea bag when I was grabbing stuff out of my apartment a few weeks ago. On Sunday, City Winery is hosting a special streaming concert for Mother’s Day with a very deep lineup of acts including Billy Bragg, Andrew Bird, Roseanne Cash, KT Tunstall, Mary Chapin Carpenter, Rufus Wainwright, and more. Later in the week, we’ve got BAM’s Virtual Gala 2020, honoring Cate Blanchett, Jeanne Donovan Fisher, and Zadie Smith, and featuring performances by Alvin Ailey American Dance Theatre and St. Vincent, among others; and Tribeca Talks is broadcasting live, festival-style Q&As with creators and stars of shows and movies like The Half of It and Bad Education. And if you’re up for a more long-term commitment, the 92nd Street Y has a 5-part virtual class about particularly influential sitcom episodes taught by Jennifer Keishin Armstrong and starting on Wednesday.

One weird thing I’ve discovered during the lockdown at my mom’s house is that the banks of the Hudson River near here are a trove of sea glass and other interesting items, evidently because we are downstream from an old municipal dump. I am as surprised as anyone to learn about my affinity for trash picking, but we’re in strange times folks, and I’ve amassed quite a collection of objects over the past few weekends. I like to think about where they came from and how they’ll be incorporated into my former, pre-pandemic life and living space if and when I return to them. Anyone else doing something new that feels bizarre and unexpected but also oddly comforting? I’d love to know about it! Finally, I’ll leave you with two stories about incredible fellow Brooklynites that I was particularly inspired by. First, read about Thadeaus Umpster, an activist who has been placing old fridges on the streets of Bed-Stuy and Bushwick full of free food for people who need it, with the help of mutual aid groups and local grocers. Second, check out this GoFundMe started by artist Laura Connelley, who has raised nearly $12,000 so far for animal welfare groups by creating hundreds of custom pet illustrations over the course of a few weeks. Both prove that we really are in this together, and positive change can come in many forms and from any person so long as they are willing to really commit to it.

Have a relaxing weekend all, to the extent one can these days, and remember to let the important moms in your life know how appreciated they are.