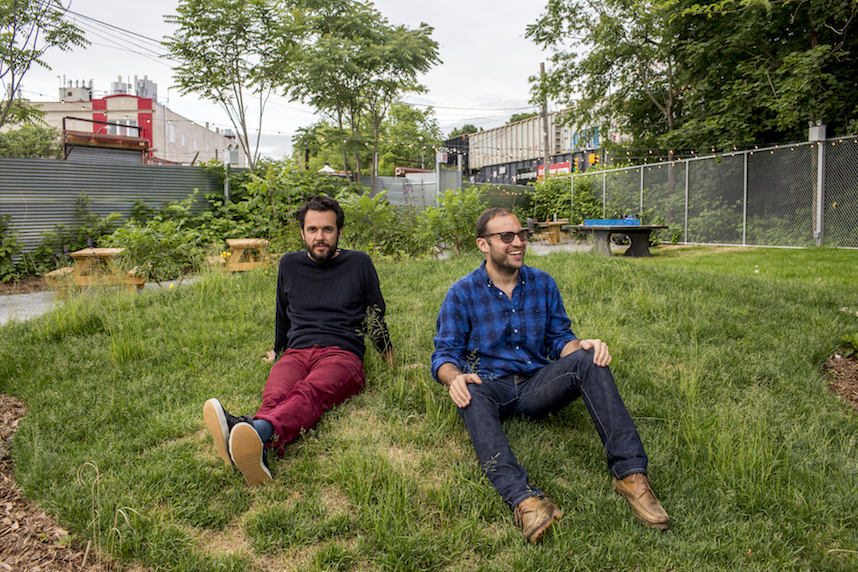 Eamon Harkin and Justin Carter (right), the DJs behind the popular Mister Saturday Night and Mister Sunday dance parties. They created a permanent home for their roving parties and other DJs at Nowadays, which they opened in 2015. Photo: Natalie Keyssar

On the morning that outdoor/indoor venue Nowadays announced that it would be closing its doors in light of the pandemic, co-founders Justin Carter and Eamon Harkin and staff spent the day figuring out a way to keep their parties going. While the park-like hangout space and indoor dance club on the Ridgewood/Bushwick border sat empty, it would begin streaming DJ sets and hosting discussions so it could keep their dance music community together.

The virtual streams and corresponding chat room, set up with the help of Francois Vaxelaire from online station, The Lot, would be free, but to give Nowadays a fighting chance of survival they offered a Patreon membership. To help its roughly 60-person staff, many of whom are LGBTQ+, an emergency Venmo fund was created for those who were especially vulnerable. The streaming would start that weekend, they told their fans by email, beginning with their signature listening party Planetarium on Friday and a Saturday night broadcast of its resident DJs, “so you can rave in your bedroom.”

That was nearly 13 weeks ago. While the city’s multi-phase reopening has been pushed to June at the earliest, Nowadays continues to broadcast a mix of dance music and talks each night, from DJs’ home studios to listeners on laptops and phones. The virtual events, announced every Monday on Instagram, have some upsides: Justin Carter recently said he was able to test out a set that would be hard to pull off in real life, staring with club music and ending with “bedtime,” where listeners were to encouraged to grab their pillows and lie down as he played ambient tracks and led a relaxation meditation. “At the same time,” Carter told Vogue, “it seems clear to me that something has been lost already. The scene that I’ve known and engaged with for pretty much all of my adult life is going to be really different on the other side of this.”

With the hospitality and entertainment sectors slated for the last phases of New York City’s reopening, the other side is still a long way off. I interviewed Carter to find out how he and Nowadays were faring in the meantime and his forecast for the future of nightlife in NYC.

Brooklyn Based: How are you doing?

Justin Carter: Just fine. I mean, not great, but what can you do?! I’m trying not to think too hard about the things I can’t control in the future. Just trying to think about today.

I think that’s the big lesson of all this for me: “What can I do today?” And that’s what I’m going to concern myself with because I can’t really … No one understands what’s going to happen. There’s no precedent for it, so we can all look at the news all we want to, but nobody knows when businesses are going to open again and what it’s going to look like when they open again and what’s going to happen to the economy, and how banks are going to deal with it. It’s all speculation, so just prepare as you can and then spend some time talking to the people you love or something, you know?

@fabriclondonofficial is showing solidarity with fellow closed clubs around the world by highlighting a few of their favorites. They have very kindly included us, along with a mix from resident DJ and programmer DJ Voices. The photo here by our GM Gareth Solan, who still comes in every day to check on the plants and oversee our live stream, shows what our dance floor has looked like since our doors have been closed 🌱 We miss all of you so much and can only hope this story has a happy ending for clubs worldwide. ⁣ ⁣ In their words: “Community is everything at Nowadays. The Brooklyn space is a focal point of New York’s electronic scene, known as a second home to a talented group of local resident DJs, as well as a large number of the city’s LGBTQ+ clubbers. In addition to the indoor floor pictured, the venue spans a larger outdoor terrace (home to the club’s much-loved Mister Sunday series through the summer) and a restaurant called Diner by the Izakaya, and with a rare 24-hour licence, the biggest parties can often stretch well into the following day.”⁣

I know. How long, if you don’t mind me cutting straight to the chase, do you feel like Nowadays can survive?

I have no idea. It’s all dependent on a few different things, none of which we know the answers to at this point. We’ve reached out to our landlord and sent him a proposal, and even after two months, he’s not engaged with us. And so there’s a big question of what is happening with our rent. Are we going to be expected to pay in full? Right now we have to assume so, which puts everything in an extremely precarious place. In the meantime, will the government do anything about suspending rent for commercial spaces?

We’ve been approved for the EIDL from the SBA but have not received it, and we’ve received the PPP loan, but the PPP loan is not going to help us with rent. So I really don’t know how long we can survive.

In a way, we’ve gotten pretty far—so many other businesses weren’t able to get the PPP or EIDL approvals. But our business is not going to qualify for loan forgiveness with PPP because we’re not going to be able to meet the payroll requirements. We could pay a few workers who could help us do online streaming, but otherwise, there’s no work, and there will be no work for the foreseeable future. Even if we had more work to give people, think about it, if you were a bartender, and you were working for us, I don’t know, a couple of shifts a week, your tipped wages would allow us to bring you back on payroll at something like $400 bucks a week. But if you’d qualified for unemployment already, and you’d gotten the $300 a week or whatever you would get from New York State unemployment plus the $600 a week that the federal government has chipped in, you’re not going to come back to us for payroll—especially because you know that eight weeks after we hire you, when our PPP funding runs out, you might have to go back into the unemployment line. Can you imagine with all the headaches people have gone through getting unemployment, dropping out of the process now, knowing you’ll have to start all over again in two months? Many of our staff still haven’t received any funds yet, even though they applied two months ago.

So, yeah, we’re probably not going to be able to get our loan forgiven! That’s a big thing that we have to grapple with.

Of course, that doesn’t mean that there’s not going to be some other solution that’s put out there. That doesn’t mean we’re not going to have a good conversation with our landlord or something. I mean, I’m not bubbling with confidence about it, but it’s not a done deal. I’m keeping hope alive.

At this point, we haven’t had the doors closed on us, and that means we’re still here. There’s still the possibility that another stimulus package will be passed, and it will be more specifically geared towards the hospitality industry and New York in general where rents are higher. So, I don’t know what’s going to happen, but I still have hope. We’re doing anything that we can, and that’s all we can do—the theme of the day. 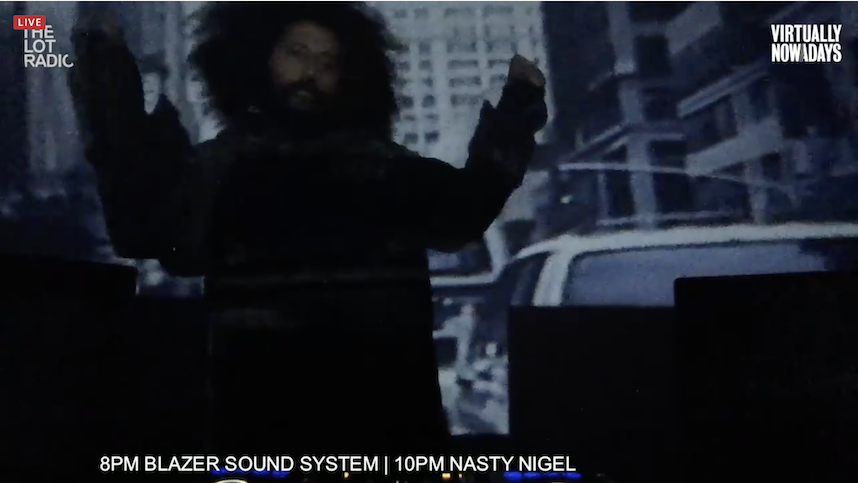 A screenshot of a virtual set by Nasty Nigel, a DJ and rapper with the collective World’s Fair. Those tuning in during a stream, which have brought up to 11,000 viewers together, also have a chatroom to connect with each other.

How are the virtual events going?

They’re great. They satisfy a few of the things that I feel like our community needs and looks to us for in normal times. The community of artists looks to Nowadays as a place where they can go and practice their craft as a DJ or a live musician, to be able to communicate through music, in a way that goes beyond words. Our audience can still receive that transcendent power of music; and we are able to, through the chat that’s online in the virtual event, give people some semblance of the community that exists at Nowadays when it’s open as a physical space.

I personally have had the experience of being in the chat room, and being able to have side discussions about the topics being discussed on the stream just as it might happen at Nowadays when we host our community-focused educational nights. I’ve shared contact info with people in there and brought conversations onto the phone. It’s still a space for connecting. We’re still able to provide something—in a different way, obviously—that we provide when we’re open.

I am generally skeptical about the usefulness of technology and a non-believer in the idea that social media somehow brings us together. A lot of times you’ll see people in a space together going to their devices to mediate communication. That is pulling people apart. We have rules at Nowadays when we’re open as a club and as a community space, where we tell people that they can’t use their phones on the dance floor, specifically for that reason. But with all that said, right now I see the benefit of technology. I see that we’re able to do some version of what it is that we normally do online. And that’s a good thing. 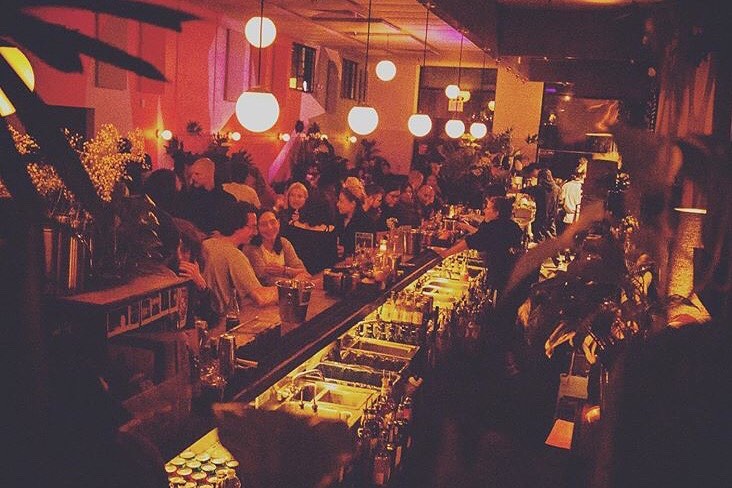 With two bars, a restaurant, space inside and out for dance parties, film screenings, lectures and hanging out day and night, Nowadays transcended the typical club when it was open. It’s now being creative with its virtual events, too. Photo: @nowadaysnyc

Do you have any predictions about the future of going out again?

I’ve just gotten to a place now where I can start to think about what we might need to do to make Nowadays relatively safe, for perhaps some kind of limited opening. But when I think about that, of course I wonder if that will even make financial sense. We, like most other places in the bar/restaurant/nightlife world, function on very thin margins, and it doesn’t really make sense to be at half capacity or a quarter capacity because a lot of the expenses that we carry for being open are fixed.

What I do see right now that I hope will have a big effect on how nightlife changes, is that in our community—specifically the Nowadays community but also the larger community of dance music, community spaces, and DIY spaces—there is a real spirit of mutual aid. At this point the federal, state and city governments are largely failing us. But we’ve seen a network of people reaching out to us and each other, saying, “Hey, what do you need? How can I help you? I’ve gotten some money or some resources right now. Let me share that with you.”

We’ve made a Patreon page that has garnered an overwhelming amount of support. It’s become the only reliable lifeline we have at the moment. We’ve also created a fund for our staff which has been supported generously, and that has allowed us to get money into the hands of people who are not eligible for or still haven’t received unemployment. That’s a lifeline for them. It’s amazing to me that in these very uncertain times, with so many people losing work and facing uncertain futures, that people are still reaching out and offering help. It’s humbling.