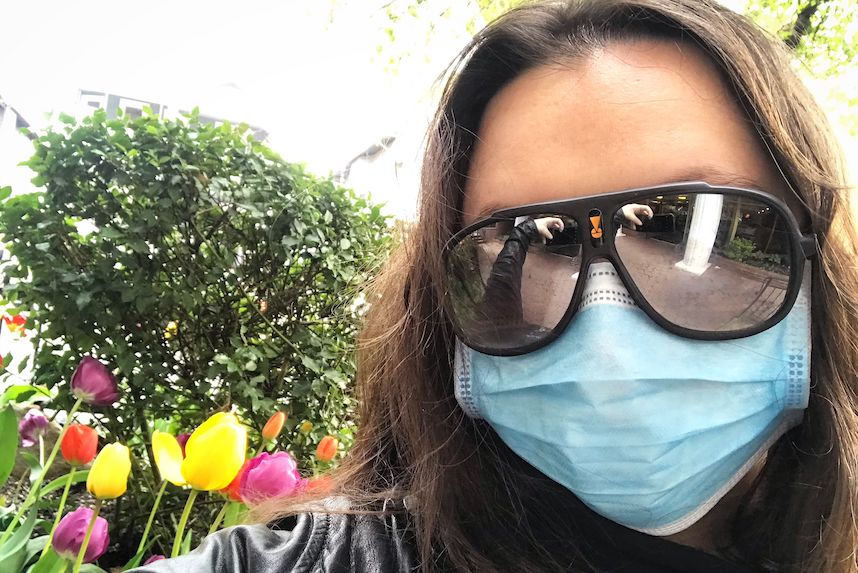 The author on the other side of her 23 days in isolation. Photo: Regina Bresler

When working from home became an inevitability, I was relieved to skip my commute, which included twice-daily walks through the corridors of Port Authority, a place that on a good day is an infection waiting to happen. A decade as a freelance writer and researcher has trained me for solitude and telecommuting, not to mention financial insecurity and complicated circadian rhythms. Closing a magazine remotely with editors and writers working from disparate corners of the east coast left me little time to spiral into the doom, allowing for the delusion of familiarity and comfort—one broken every time I ventured out to stock up on supplies for riding out our collective PAUSE.

Anxieties percolating, I’d do my usual midnight market runs, just me and a handful of other patrons. But things were different. Men dove out of each other’s paths as Madonna reminded me about this material world over the store radio while I surveyed the ransacked pasta aisle. Lucky to live in a 24-hour food oasis, I never think twice about running out of pantry staples or cravings at any hour, but here I was scrambling to make my purchases count. By the time I reached the register, Prince was telling me I’ve got to slow down, and a deep sigh escaped me, startling the older gentleman serving as cashier who asked if I was hurt. I uttered “my heart” because he had just told me it was the first time in hours his mask had been lowered. They weren’t yet mandated, but I guess he’s no fool. I thought of his age and susceptibility and remembered our last interaction was shared disapproval of some teenage boys simulating lewd acts with eggplants for their social media. Who knew when I would get to scold a rude sophomore again? Spontaneous tears welled up at the thought, but face touching is taboo, so I shoved a few dollars in the tip jar and retreated to my bunker. The next few grocery trips were varying states of emotionality and tipping while stocking up on produce and vinyl gloves. 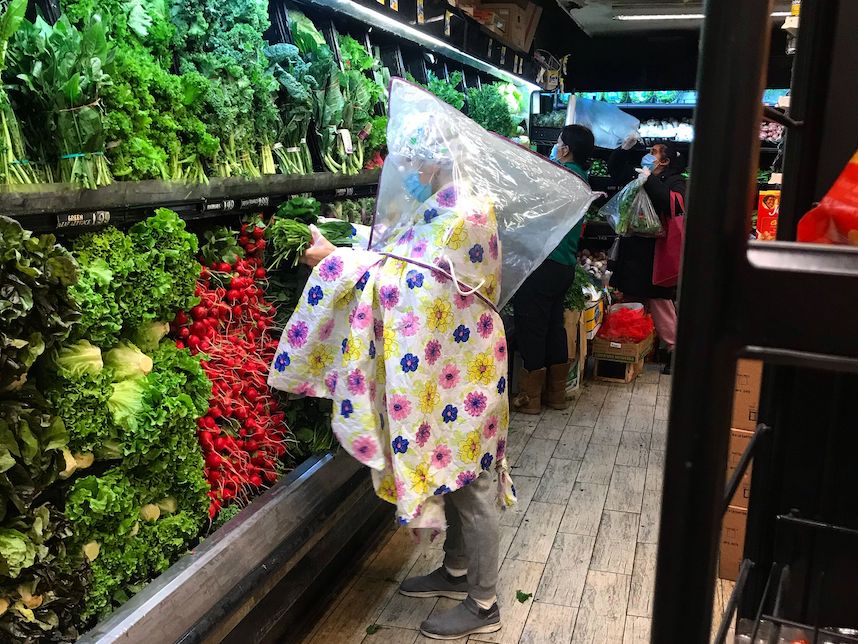 Spotted while shopping: You can never be too cautious. Photo: Regina Bresler

Two weeks into quarantine, just after sending my final invoice on a fact-checking job, a friend told me she had to cut things off with a man who tried to defend his cocaine usage by claiming it killed the virus. Heated, I discovered this theory was propagated so widely the French government released a PSA denouncing it. As I voiced my outrage over his claims of research, a routine temperature check unpleasantly surprised me with a low-grade fever that hovered at 100 degrees for the next week, and grew from there to have me over-heating, dizzy, weak and nauseous with a variety of body aches and gastrointestinal maladies I’ll spare you the descriptions of. I remembered my trouble getting out of bed the previous morning which I dismissed as exhaustion from working a dozen hours over-time the previous week. I had managed to make a tom kha gai a few hours prior to this, lucky since standing over a hot stove, or anywhere for any extended period, wasn’t in the cards for the next few weeks.

The author’s friend, Christina Artwell, serving sunshine on a gloomy night. You can find her lending support to local organizations like Universe City NYC in their food distribution efforts during this crisis.

Twenty-three days of isolation followed, where my only contact with the outside of my studio apartment was peeking my head out the door of my apartment building in Kensington weekly to gather the groceries my brother and my friend with the terrible taste in men were kind enough to bring me. My brother gifted me with pastrami and lox and Gatorade I initially dismissed as unnecessary (it was beyond necessary). My friend danced her way to my door bringing sorrel, Airborne, and tampons. The anxiety of the weeks prior had mostly evaporated, as those of my loved ones seemed to swell. I drew lines in the sand about speculating about my health (it took nearly three weeks for my temperature to come down without Tylenol) and I refused suggestions of unprescribed z-pak’s or hunting for hydroxychloroquine. I’m uninsured, and maternal fears mixed with federal dissemination of disinformation makes for complicated bedfellows. I spoke to my best friends nightly, and my mantra had become “Well, things could be worse, at least I’m building antibodies.” But seven days in, my fever was only growing. I knew the drill: Don’t go to the hospital if you can breathe, and tests were reserved for the hospitalized. But I was becoming desperate and scared, and decided it was time to reach out to the CDC for guidance. Many transfers and holding times later, an operator asked me all the standard questions regarding exposure and status as an essential worker. Being neither a medical nor federal employee, I was put on a waiting list for a Covid-19 test that could take up to two weeks.

“They could call you at any time, 24 hours a day. Make sure to answer, if you don’t, your name gets put back at the end of the list.”

“But I live alone, and I’m sick. I’m bound to be sleeping at some point. Don’t they leave a message?”

“Yes. To tell you they called, but you get put back on the end of the list.”

I couldn’t help but laugh at the absurdity of the situation and resigned myself to the fact that I was probably not going to get tested properly. But two weeks passed and the call came. There was a facility exactly twenty blocks from my house. What luck! Fever finally shook, I figured a test would put my mind at ease, and it would be good to know if there was still anything in my system.

“But I don’t drive, and I live alone. I obviously can’t call a cab. Isn’t there a curbside option?”

And I had to laugh again. In a city with natives notorious for shirking their duty to acquire driver’s licenses (yup, I’m part of that club), and a dearth of vehicle owners, who decided this testing option made sense?!? So there I was, on another list for at-home testing. Three weeks and counting, I’m still waiting. But Cuomo said the antibody testing was coming! 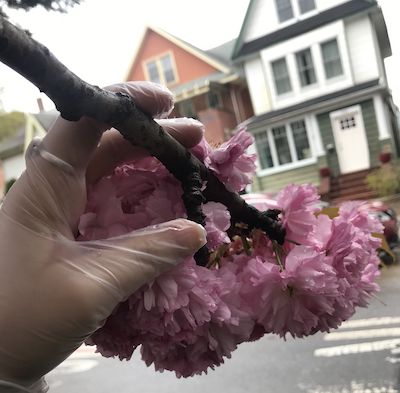 Symptom-free, I ventured out into the streets again, able to run my own errands for the first time in a month, showing only my forehead and hair to the world. I spoke to every blossoming tree, and scared the neighborhood cats who were not interested in dealing with me and my Invisible Man cosplay. As I exited the local discount store with a re-up of the good toilet paper and hand-soap (because big chains get cleared out, and also will survive via bailouts), I watched an old man struggle to get off a bench as a handful of people passed without a glance. When I asked if he needed help, he grabbed my hand without hesitation. Seconds later he was upright and we parted without a word. My first physical contact in over a month. Heart racing, I hoped he washed his hands well, I was gloved but he had been touching the bench and the hydrant behind him. Not to mention a stranger’s hand, my hand. I felt my eyes welling up again. Then, I was catcalled: “Que linda!” Apparently when times are tough, even a glimpse of forehead can be titillating. 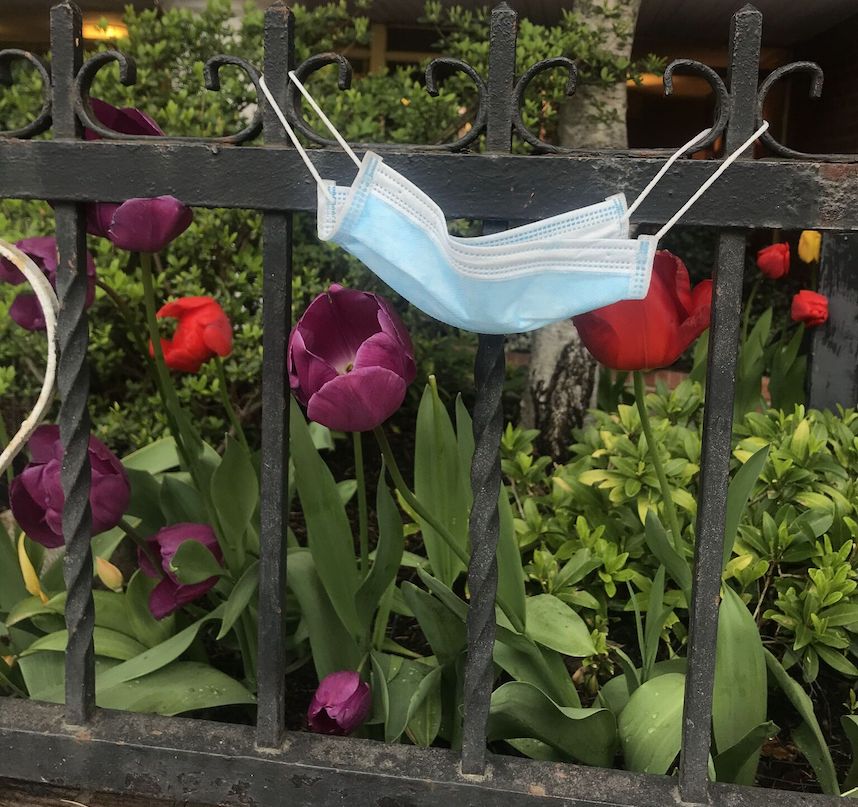 The days continue to stretch on, and time on the outside remains scarce, but I calculate its passing by the petal to sidewalk ratio, as the traces of cherry blossoms disappear. One well-timed walk revealed the rarest of treats: the landscaping center with its gates up. I listened as the gardening pro played “here’s your hat, what’s your hurry” with every would-be green thumb to step foot in the shop. Comforted to encounter a classic curmudgeon in the wild, I brought a ponytail palm home and decided to test my luck and the abridged menu of a new Thai place that was forced into the softest of opens mid-PAUSE. Simmering aromatics and incense mingled in the air as I politely asked how things were going. I was met with a smile and news that weekends are still busy times for take-out. On the wall hung a small portrait of a monk, and a sharpie mural stretched across the wall mapping the owner’s journey to New York, including his family’s first snow angels, and ending in a Yankees fitted. I stood waiting in the doorway, listening to the chanting record which sang from the kitchen; the monks seemed to reverberate like massive brass singing bowls. My mask lowered just enough to sneak a few sips of fresh air from the empty streets, I closed my eyes for a micro-meditation. The streets slick from that morning’s rain, I could hear wet tires and birds, and just barely whiff the smells of charred meats on distant grills and blunt smoke. Eyes now opened, for the first time in weeks, my neighborhood felt like itself, brilliant in springtime greens and pinks, and preparing for the new season. 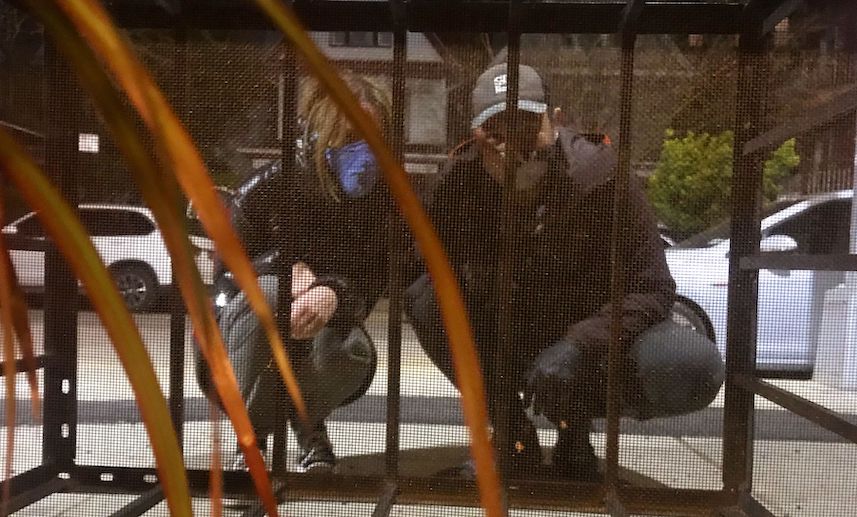 Brotherly love made isolation a far less overwhelming experience than it could have been. Photo: Regina Bresler

My birthday came and went in quarantine. As did my first surprise party, facilitated via Zoom. Loved ones sent flowers and Italian pastries, and I gifted myself Mezcal cocktails and panuchos from La Loba. Things were odd but looking up. Facetime calls and daily walks kept my spirits high, and my brother had bought me the gift of bloodwork. Finally, I could get some answers via an antibody test. I imagined it would grant me the freedom of protection from further infection and the promise of gathering some much-needed hugs. Well, my test came back negative, and the questions keep coming. Did I take the test too early? Was it faulty? Were those three weeks of isolation due to a lesser virus?

I was confused, and frustrated, and a bit angry. I told a friend the virus hadn’t paid what it owed. She surprised me, having little patience for such talk.

“You didn’t end up in the hospital. You didn’t need a respirator. I’m tired of hearing everyone complain about these antibody tests! We’re in the middle of a pandemic, and all these people that made it through sound so entitled when their tests come up negative. You did what you were supposed to do. You stayed home, you played it safe. And now you’re better. Maybe you had corona, or maybe it was something else. You still have to stay safe, so keep doing that.”

So twenty-three days of isolation, six seasons of The Sopranos, seven weeks of waiting for unemployment, and no Covid test later, I’m still keeping my distance and balancing my emotions while tipping at the register. But we’re on the mend. I’m hearing fewer and fewer sirens at night, and every time I go outside I’m reminded of the strength of my local community, as we recognize each other through our masks.