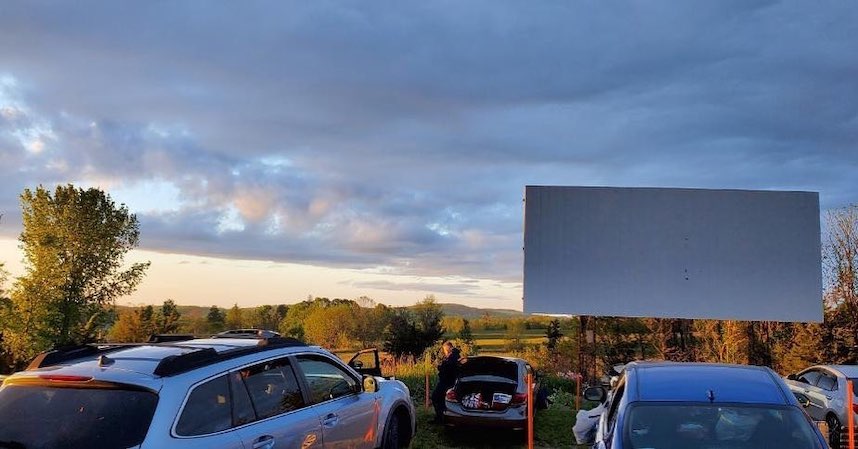 A handful of upstate drive-ins like the Warwick Drive-In opened over the Memorial Day weekend, and for some theatergoers, pandemic precautions are not part of the attraction. Photo: @mari_timinski

As we pulled off the pavement and onto a dusty gravel road, I instantly felt my chest begin to tighten. There was a line of cars waiting to pay admission at the entry booth at the Overlook Drive-In Theatre in Poughkeepsie, New York. It was May 22, the Friday of Memorial Day Weekend; the official kickoff to the summer season, and opening night for drive-ins all over the Hudson Valley.

But this was no ordinary opening. We’d been under lockdown for over two months, and, just a week before, we’d all gotten the news that our region was not yet, in fact, going to begin Phase 1 of reopening on May 15. Many were unsurprised by this news, some of us were even relieved. But some were furious and resistant.  The tension was strung tight through our hometown.

With beaches and big gatherings for backyard barbecues off-limits—at least to those following the rules—what, my husband and I wondered, could we do to mark the arrival of the summer season? We wanted something that felt novel, and, more importantly, wanted someone, or something else to entertain our children.

Earlier that week, our neighbor had said to me, “You know, this is going to be the summer of the drive-in.” The what, I thought? Visions of Grease flashed through my mind. I’d never been to a drive-in movie theater, and I was pretty sure they hardly existed anymore. 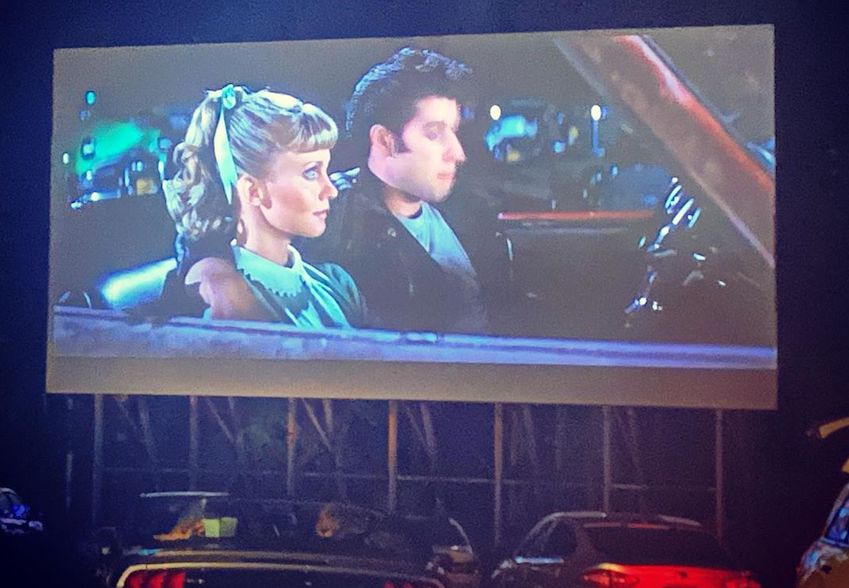 Turns out I was both right and wrong. Drive-ins have, indeed, been dying out since their peak, in the 1950s, when there were over 4,000 of them spread across the country. Today, that number is down to about 325, most of which operate seasonally. That said, in the mid-Hudson Valley, where my family lives, we’re flush: Within an hour’s drive, we have access to six drive-ins. Who knew?

Apparently, lots of people. This became obvious to me as soon as we pulled into the parking field at Overlook. It was a full hour before showtime—8:15 for Trolls World Tour, which we’d brought our three-and-a-half-year-old twins to see (we were not-so-secretly hoping they’d conk out in their car seats after opening credits; spoiler alert, that never happened)—and the place was already hopping. Families of all stripes had set up shop. Most parked with their trunks or truck beds facing the screen (a pickup is a perfect drive-in vehicle). Hatchbacks were thrown open as if at a tailgating party, and most folks were sitting outside their cars in folding chairs. Most had brought their own food and drinks (the BYO rule is unspoken at most drive-ins, and it lends the whole thing an air of thrilling, New Orleanian open-container revelry). Some ate out of takeout containers on their laps, while others were gorging from full-fledged buffets and pouring shaken cocktails. I felt suddenly sheepish about the bag of cold snacks and sweatshirts I’d packed as we maneuvered our Subaru station wagon into place.

But my feelings of newbie insecurity were quickly overwhelmed by my anxiety at the situation surrounding us.

“Is this okay?” I asked my husband nervously, feeling as though the walls were closing in.

While signs warning “no mask, no entry” plastered the admission booth, and while the theatre’s FM radio station constantly reminded us to enter the public restrooms one at a time, to maintain social distancing in line at the snack bar, and to keep our faces covered if we stepped outside our vehicle, most people at the drive-in were living as though the pandemic was an illusion. Masks were pulled down around necks or removed altogether, kids ran in packs blowing bubbles and squirting each other with water guns. People walked very close to the open windows of our car as they headed to or from their own.

In part, I was merely out of practice at being around groups of people. But the edge I was feeling was more than that: some people, it was clear, had flocked to the drive-in to flout public health recommendations. And, it quickly became clear to me, the theatre staff planned to do nothing about it.

“I think so,” he said, as our kids climbed into our laps in the front seat, giddy to be up and out of the house so much later than normal. I wasn’t totally convinced. It was obvious to me where my boundaries lay: no public restrooms, no snack bar. As dusk neared, I walked my son to the edge of the field to pee. I crouched, too, carefully avoiding a few springs of poison ivy.

When the (vintage) previews began, I felt myself chill out—in some ways, for the first time in months. I didn’t have to MC my kids’ fun. And they were elated: A movie? Unlimited snacks? At night? In the car? They could clamber back and forth from front seat to back, didn’t have to be quiet or still. It was, in every way, more fun for both them and for us than a family trip to a traditional movie theater (and cheaper, too; we paid $20 for all four of us, $10 apiece for the adults, and the kids got in free). Did I wish we’d packed a more creative snack bag (and a few more beers)? Yes. But even if I’d thought to pack chairs or a picnic blanket, it’s clear to me there’s no way in hell I’d be comfortable setting up picnic-style outside our car given the ongoing threat of viral infection. 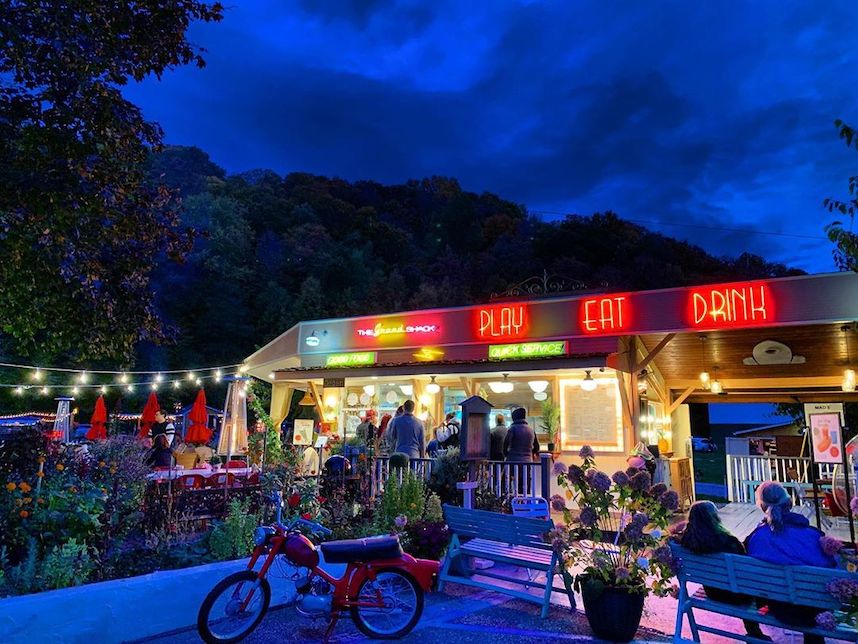 Four Brothers Drive-In now asks that snack bar orders be placed online, so that it can call people to the counter one at a time. Photo: @fourbrothersdrivein

Two nights later, my husband and I tried again, sans kids (we’ve been quaran-teaming with the neighbor who tipped me off the abundance of drive-ins since day 1, so, for the first time in more than two months, we went on a date while someone else put our kids to bed). We headed north this time, to the Hi-Way Drive-In, a 4-screen theater in the very rural, solidly Upstate town of Coxsackie, in Greene County, where we bought tickets for the 8:40 showing of Pixar’s new Onward (yes, we saw an animated film on a night away from our kids). The vibe was more relaxed, the clientele seemingly more practiced and better behaved. Had two days of beautiful weather and the notion of a holiday weekend settled people’s urgent need to get out, or were Catskills residents just drive-in pros?

I felt better prepared, too; we’d stopped for contact-free takeout on the way, packed a quart container of a mezcal-laced slushie, and a travel Scrabble board. We still stayed in our car, even for the hour while we waited for the movie to begin. But I was able to focus on the cool evening breeze blowing through our open windows, and find amusement in the odd groupings of people surrounding us. I still didn’t set foot in the snack bar, or pee in the bathrooms (note: if ever you were thinking of mastering the outdoor squat, this is the time). I still scoffed every time someone walked by without a mask, but I paid less and less attention as the sky darkened, the credits rolled, and we sank back into the comfort, alone—but surrounded with—so many others trying to find a couple hours of delight and escapism in the wild uncertainty of these times.

The double-feature is standard at these drive-ins, with the early showing beginning when dark falls. At several theaters, kids under 5 are free, while older children’s tickets are discounted. Most theaters show films all week long during the summer season. Snack bar offerings range from standard concession fare—popcorn, sodas, hot dogs, and candy—to gussied-up regionally made snacks. Four Brothers is the standout in terms of amenities, offering a full food menu, cocktails, and the option to camp on-site. Check each website for details. 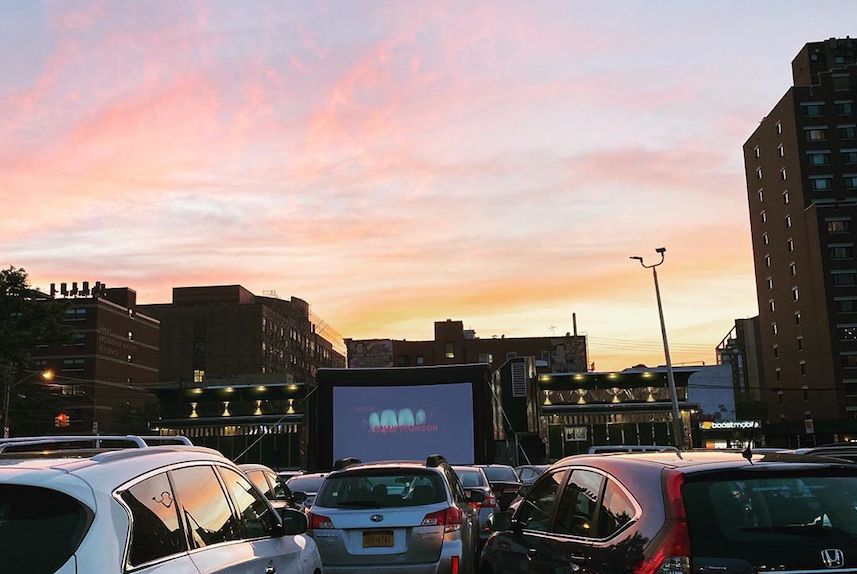 With limited real estate for traditional drive-ins, New Yorkers are getting creative with parking lots. Yankee Stadium is slated to host a series of drive-in concerts and films in their lot starting in July at the Uptown Drive-In (get on their email list for updates), and the Bel Aire Diner in Astoria, Queens has been screening classic and independent films in its lot since mid-May. Follow their Instagram to learn when tickets go on sale; there are only 40 parking spots available so you’ll need to click fast.