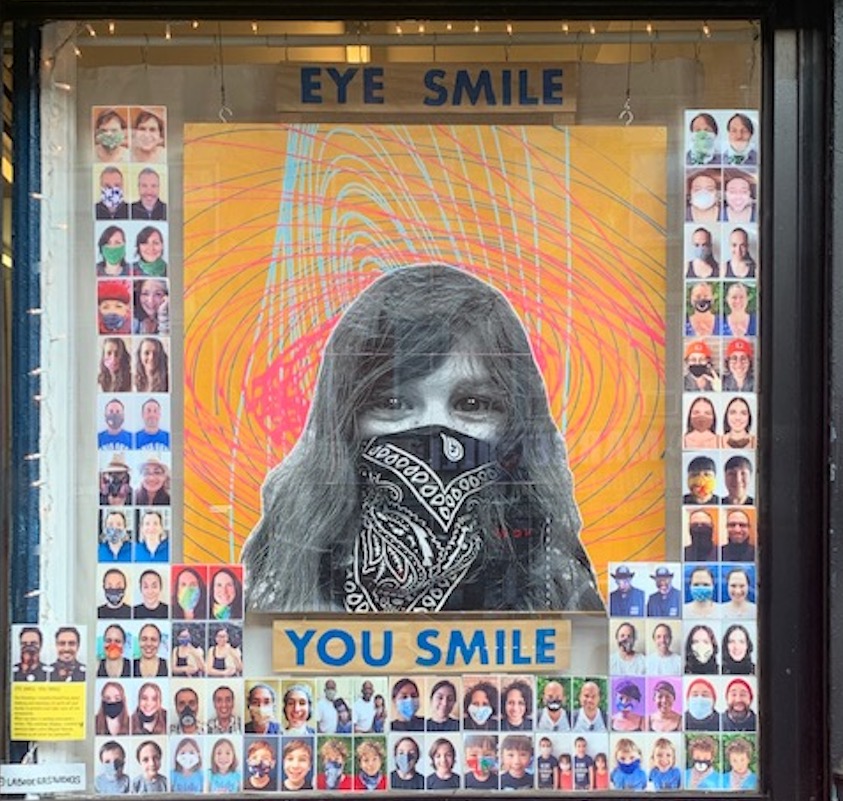 “Eye Smile, You Smile,” a project by artist Miguel Ayuso that’s hanging in the window of his gallery, La Bodega, in South Slope. This is the last weekend the physical gallery will be open. Photo: Kate Hooker

Hey hey hey, how’s everyone doing out there? It’s been a wild couple of weeks in this already insane time to be alive, but I’m feeling a new sense of hope inspired by a couple of notable developments and I wonder if you are too. First and foremost, I am awestruck by the determined, sustained action that I have seen from people in this great city and elsewhere all over the globe to combat racism and police brutality. Never in my life have I borne witness to this level of spontaneous, widespread, organic protest activity, and it is blindingly gorgeous! So, by the way, is the fact that it seems to be working, at least by some measure that is more significant than we’ve seen in recent memory! Clearly, we can never erase this country’s abominable history in the realm of race relations—nor should that be the goal—but we can help to contain the harm and prevent fresh wounds from this point forward by taking this opportunity when the powers that be appear to be listening for once, to hold ourselves accountable and refuse to back down until things actually change. Is anyone going to convince Trump and his MAGAbots that they’ve benefited for their entire lives from systemic and insidious racism that permeates everything in this country? Probably not, honestly, but for the first time since November 2016 I’m starting to feel like they are on the way out too, and that is another reason to feel cautiously optimistic, Bible photo op-related abuses of power notwithstanding. Finally, in personal news, I am back in Brooklyn and I have to tell you it feels fantastic to be here. I missed it and its energy so much while I was gone, and am profoundly relieved that it feels fundamentally the same, despite the tremendous loss the borough has suffered and the shuttered storefronts and masks.

With the lovely weather and the improved general vibe, there is a temptation to be out and about and supporting local businesses (especially Black-owned ones), and I’ll go on the record to say that I’m not sad about the take-away margarita phenomenon. Obviously, though, the virus isn’t gone, so please be safe and careful as you head into this weekend, and remember there are still lots of things you can do from the safety of your own home. Tonight, for example, there are two highly-anticipated movies dropping online: Spike Lee’s Da 5 Bloods on Netflix and the Judd Apatow/Pete Davidson collaboration The King of Staten Island, available on Amazon and Apple TV. If you’re more in the mood for an old classic, critics A.O. Scott and Manohla Dargis are sponsoring a Nine to Five viewing party this weekend. The reality of COVID means that Pride celebrations are going to be a bit subdued this year, but revelers can log in on Saturday to the Pride Summit, a day-long party sponsored by Billboard and featuring folks like Billy Porter, Big Freedia, Margaret Cho, and more (we have other ways to celebrate Pride here). If you’ve been protesting like mad but feel like your sign-making skills are lacking, check out this virtual Drink and Draw lettering workshop happening on Saturday afternoon. One of the things I really enjoyed watching during the early days of lockdown is Unorthodox, and so I’m hoping to catch this conversation between the memoirist upon whose life the story is based, Deborah Feldman, and the lead actress from the series, Shira Haas, on Monday. Finally, it appears that all of my muscles have atrophied over the past 3 months and it’s time to do something about that, so I may check out some socially-distanced yoga in Prospect Park on Thursday night. Otherwise, this week feels like a good time to head to the beach and get some sun and fresh air, even if it’s not possible to swim yet. Looking for a good read? Check out our list here, or this excellent resource put together by BRIC on how to support Black Lives Matter.

I plan to hit up the bike protest happening at Grand Army Plaza at 6pm tonight—hopefully we see some of you there, from a safe distance. I am proud to be part of a community that shows up, in whatever way each individual can, to fight injustice during a time of great hardship for everyone. It’s inspiring beyond words, and although I love the commitment to keep each other safe by wearing masks, I miss seeing people’s smiles. That’s why I was particularly struck by Eye Smile, You Smile, a project by artist Miguel Ayuso that’s hanging in the window of La Bodega art gallery in South Slope, which sadly, will close its physical doors after this weekend. Ayuso has juxtaposed photos of Brooklynites wearing masks with photos of their uncovered, smiling faces and it brought a big smile to my face this week. Thanks for being the best, Brooklyn, keep up the fight and stay safe all!