Brooklynites won’t likely be welcomed in France any time soon, but that doesn’t mean we shouldn’t seek out some elegance in our own backyard. Who needs a stroll along the Seine when souvenirs of France lie just a few blocks away from the East River? Gift yourself a lazy afternoon in Carroll Gardens and Cobble Hill where enough République-inspired finds will stave off any mid-summer ennui.

For a French seal of approval, we enlisted Adela Alb Hoerlé, a former NYC mixologist who decamped to Paris a decade ago with her Alsatian husband Jérôme. They’ll chime in along our journey, which begins at the corner of DeGraw and Court Streets. 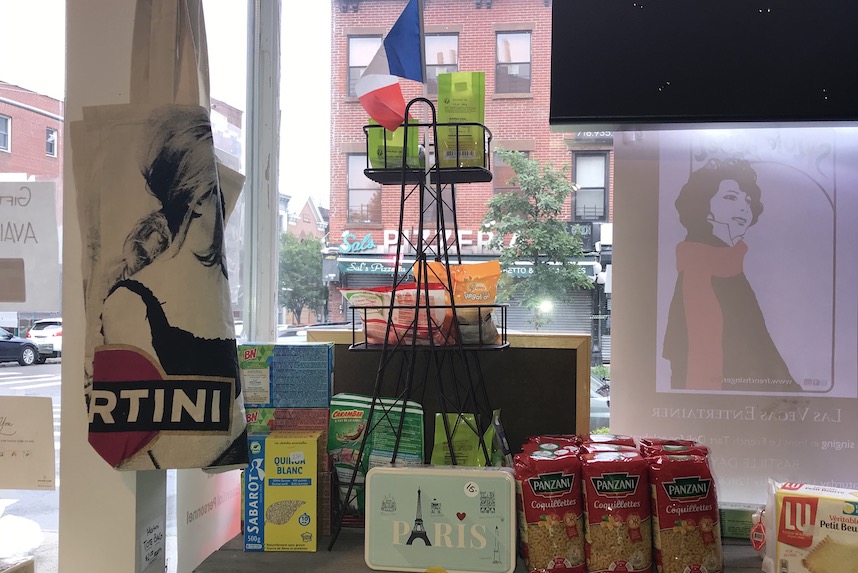 Start at Le French Tart Deli (306 Court St., closed on Mondays) for breakfast (or pop in today, Bastille Day, for Eiffel Tower and French flag macarons). Open since February, this charmingly over-stuffed grocery persevered through the peak of the pandemic. Today, two mask-wearing customers are welcomed at a time to Laurent Chavenet’s épicerie fine. Strains of accordion music weave around the baskets full of French supermarket items like Cémoi chocolates, Le Petit Marseillais soaps and BN cookies for children.

Beeline to the back counter, now ensconced in Plexiglass, and order the perfect French breakfast: baguette (ask for rustic), unsalted butter and a tiny jar of confiture d’abricots (apricot jam). Add a freshly-brewed café au lait and enjoy it all on the front bench outside. But what about the “French Toast Made by a French Man”? Is that a better option…?

The Hoerlés’ take on French toast: “We don’t call it that. It’s le pain perdu, ‘the lost bread,’ because you make it from stale bread. It’s really more of a dessert, like your grandma would do. The way Americans eat French toast is not what we do.” 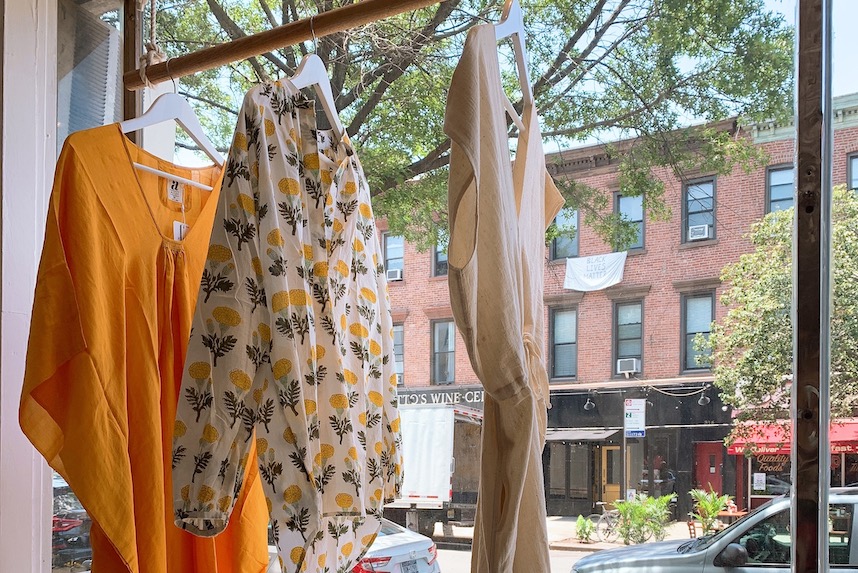 Now you’re ready to shop, and right across the street is Rue Saint Paul (313 Court St.), a sparse and chic concept-shop for women. Like their neighbor, RSP opened right before Brooklyn locked down, powered through online and re-opened in June. Owner Kelly Wang named “Brooklyn’s sustainable closet” for the street once lived on in Paris’s Le Marais. “One of our biggest French inspirations is practicality,” she says of the variety of clothes RSP sells and rents. “French style is timeless. You have pieces you wear all the time.” Look for pieces by Laurence Bras and jewelry by Alexandrine Paris.

The Hoerlés’ take on French style: “The French really are effortlessly chic,” Adela says. “They put their hair up, carry a tote bag and throw on a little red lipstick. You’ll never see athl…what is that?…athleisure? Nobody does that. Not even the moms.” Jérome adds, “Less color. We love black and grey.” 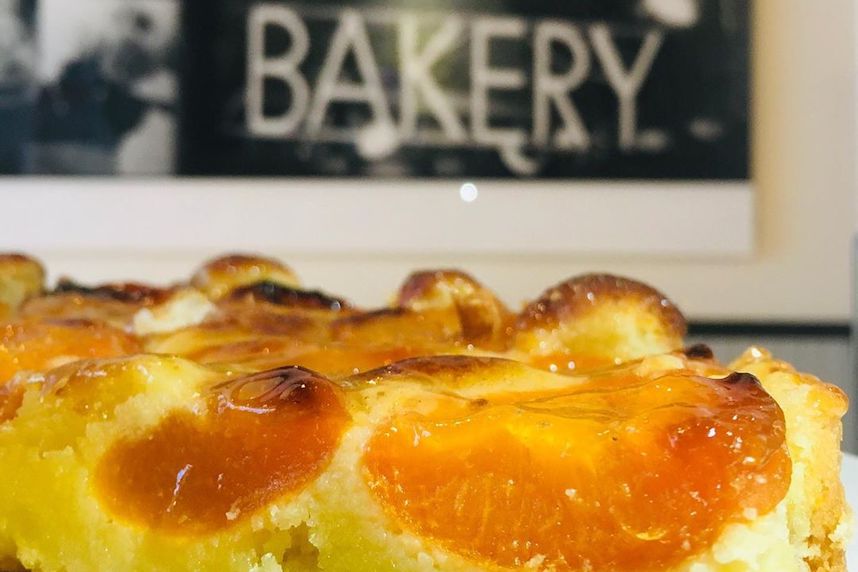 Try the tarte of the day at Charlotte Patisserie. Photo: @charlottepatisserie

Charlotte Patisserie (201 Court St.) is a spacious pastry shop that displays kaleidoscopic works of edible art. Executive Chef Michael trained at the French Culinary Institute and is a Grand Diplôme recipient from Le Cordon Bleu. Get the tarte of the day, try a delightful vanilla-custard-filled doughnut with passionfruit icing or macarons in every color of the rainbow.

The Hoerlés’ take on dessert: “The donut is something that we took from Americans. I didn’t even know what it was growing up, Jérôme says. “You’ll have macaron at the end of the meal with espresso. Good macarons are really expensive, maybe €3 each.” 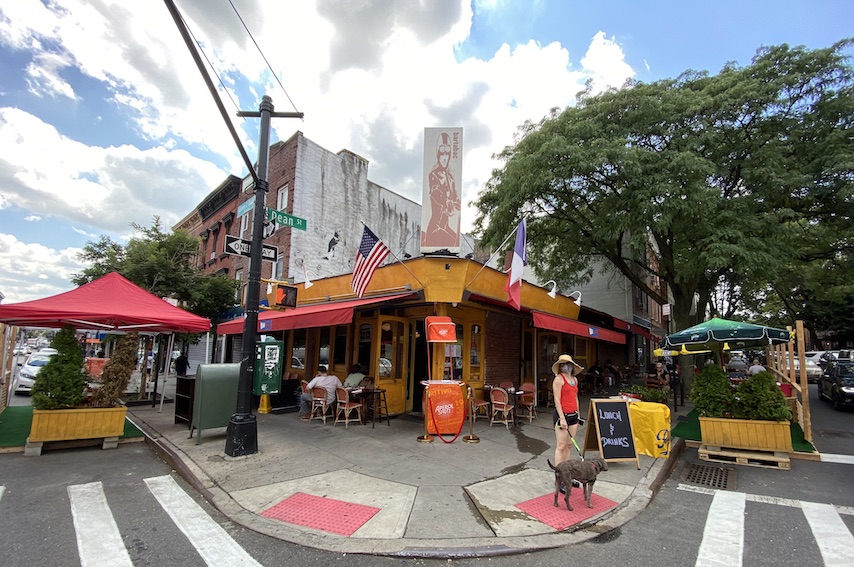 Dinner must take place at Bar Tabac (128 Smith St.), the neighborhood’s grand-père of all things French. Since 2002, the ironically-named bistro has led the neighborhood’s massive Bastille Day celebration, with up to 20,000 some years. Smith Street becomes a pétanque court (think: French bocce on sand), with more than 70 teams competing for glory. Naturally, this year’s celebration is on hold, but this neighborhood stalwart is open for business. Grab a woven rattan café chair and feast on baked Burgundy snails, coq au vin or duck salad with walnuts, dried cherries and truffle-oil dressing.

The Hoerlés’ take on Brooklyn’s Bar Tabac: “Yes, this is very French food. But a ‘bar tabac’ is where you buy cigarettes and lottery tickets. The food is basic, basic. You usually find the alcoholic of the town drinking white wine there at 10am.” (Note: This restaurant is ironically named and in on the joke.) 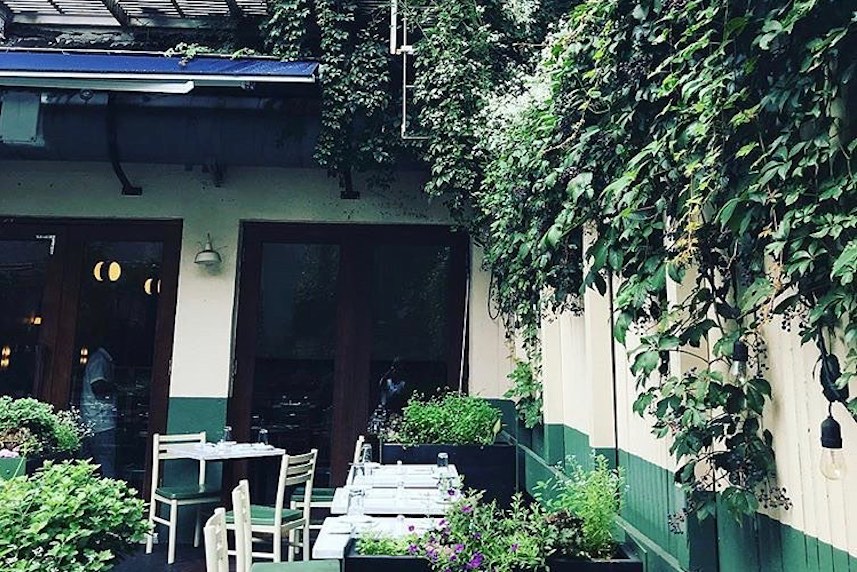 Cap off your excursion with some wine or Cognac at French Louie (320 Atlantic Ave.). The name isn’t from the Continent, but rather an infamous logger from French Canada. Settle into the socially-distanced back garden for a bottle of Bordeaux Blanc or a French 75, if you’re feeling extra chic.

The Hoerlés’ take on nightcaps: “Cocktails are occasional. The only cocktail that French people know is the mojito. We drink beer, wine and Champagne. At night, you’ll drink Cognac at the end of your meal, but you won’t make a cocktail of it.”