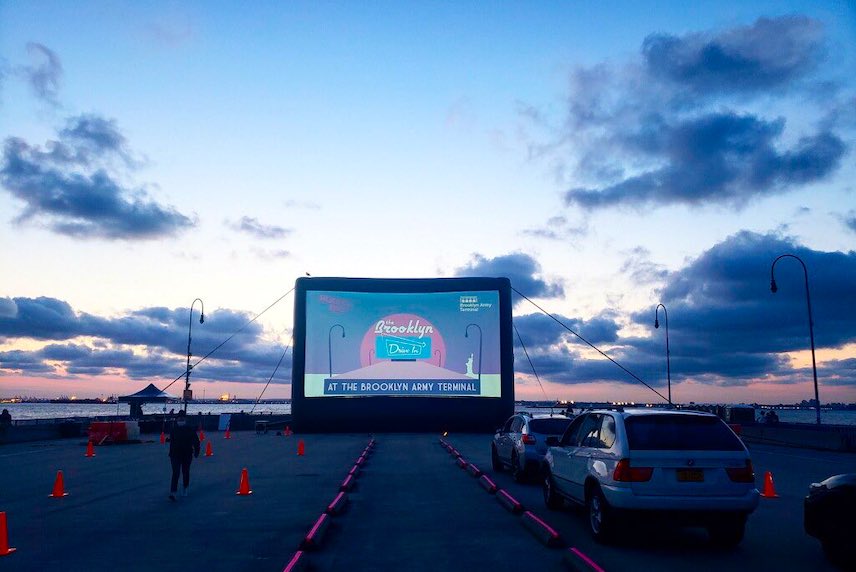 The new Brooklyn Drive-In is helmed by the masters of outdoor movies, Rooftop Films. Tickets are on sale now for movie nights through July at Brooklyn Army Terminal. Photo: Rooftop Films

Greetings friends, and welcome to Week 3,673 of pandemic life (I lost count but surely we’re at least there), now with wild weather patterns and no testing availability added to the mix of fun and excitement! I feel like I’ve now officially crossed the line into some new hippie/Luddite with avoidant personality disorder persona, but at this point my hair is an untamed, free-flowing nightmare, and I only wear linen dresses, don’t answer my phone, and avoid the news at all costs. That, iced coffee, listening to Helado Negro on repeat, and going on weirdo solo walks every day during which I constantly smile at people who can’t see me smiling at them and probably think I’m creepily staring at them is what is getting me through. Oh, and the dinner I had the other night consisting of oysters, a lobster roll, sour beer, and a frozen York Peppermint Pattie for dinner and y’all should do the same if you want a perfect culinary experience to be part of your end times summer narrative.

But maybe you haven’t completely disappeared into a morass of social anxiety and subpar grooming efforts and you’d like your formerly vibrant lifestyle to consist of more than just the occasional exceptionally good meal, which is totally fair! If that’s the case, we’ve got some ideas for ways to spend time over the next week or so, even if you aren’t leaving the house because now we don’t even know how bad the virus surge is because Trump is now hiding and deleting the test data—whee! Never a dull (read: non-crazymaking) moment with this guy, huh?

ANYWAY, if you are trying to get outside in a safe way, Culture Lab at the Plaxall Gallery in Long Island City is offering a variety of live entertainment options out of its waterfront parking lot, including sporadic comedy shows emceed by Michael Che—check their Instagram account for same-day programming announcements. Governors Island is officially open, and Gothamist has a great writeup about how to get the most out of your trip. For more socially distant fun, check out the lineup at Rooftop Films’ new Drive-In Theater at the Brooklyn Army Terminal in Sunset Park, which includes a screening of Palm Springs, the new Andy Samberg flick that we previewed in our July Culture Calendar. I also missed Hannibal Burress’ new comedy special, Miami Nights, which premiered on YouTube over the Fourth, and that sounds like a nice diversion from the increasingly distressing COVID disaster. I loved seeing the Brandt Foundation’s Basquiat show last year, so was psyched to see that there’s now a virtual tour of it available now. On Tuesday, Atlas Obscura is hosting an event dedicated to my all-time favorite animal, the penguin, so I’m all over that, and you might also consider snapping up tickets to next week’s Zadie Smith reading of her new book of essays written during lockdown, Imitations, or the first virtual iteration of the ever-popular Dessert Goals sugar bonanza happening on July 31 and August 1. Sorry for your diet, but you have to admit it’s hard to look at beautiful confections like these without feeling a teensy bit happier, right? Or, just stay in and curl up with one of our recommended summer reads, which just may have the power to transport you to a different time and place for a spell, and who couldn’t use that right now?

We’d love to hear any more tips you have for things that are lifting your spirits or, if that’s asking too much, at least getting you through this strange, unsettling period of our lives. The old adage about it being a marathon and not a sprint has never felt so resonant, so please stay the course and keep those masks up over your nose, New York. Stay safe and do something special for yourself this week—now’s not the time to skimp on self-care. Til next time!