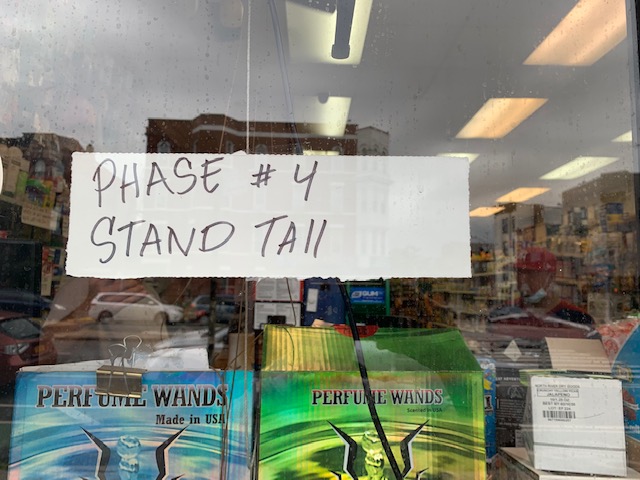 The sign outside my bodega this week is a reminder to keep up the good work.

Well, friends, it only took four months (plus, to be fair, almost an entire term of Trump running the country into the ground and a lifetime of self-doubt and low-key depressive tendencies if I’m being completely honest), but I’m here to report that this unrepentant ahole of a year has officially broken me. It happened last night, after I walked the four miles round trip in stifling heat to meet a friend at Maison Yaki for the popup they are doing with Honey Bunny’s Chicken (which, incidentally, really hit the spot). On the way home, I took the rare opportunity presented by not pointlessly staring at various screens in my apartment to call a different friend to catch up and started to make mental note of every permanently shuttered storefront I passed in Park Slope while she explained the (totally rational) thought process behind her decision to move out of New York for good. When I finally got home, drenched in sweat, cranky, and exhausted, I had the pleasure of reading about the 2020 Gestapo reboot teargassing moms and the mayor in Portland, an elected official calling AOC a “fucking bitch” on the steps of the Capitol, and Trump’s plans to shut down the postal service to suppress votes and further supplement Jeff Bezos’ $13B personal daily profit. Good times, great oldies, as the radio stations that now consider the music I grew up with to be “oldies” used to say 57 million moons ago before the earth fell off its axis and fears of the impending apocalypse were the stuff of YA novels. I’m not by any means one of those sociopaths who has been “thriving” during “these uncertain times,” but I would say I’ve managed to get through it so far by relying heavily on my standard coping mechanism: preternatural denial capabilities masked as optimism. For some reason, though, last night was the watershed moment when the blinders fell away, I saw just how much deeper the black hole of 2020 is going to extend, and somehow, somewhat impossibly for the very first time in all of this, I cried myself to sleep. I woke up this morning with a broken heart, comically puffy eyes, and an overwhelming sense that any control that I feel I have over anything, least of all my emotional state, is a bit of an illusion for the time being. At the same time, I for one am NOT leaving New York anytime soon, and it is incumbent upon me to do what I can to support the struggling people and businesses that remain and who have been impacted much more harshly than I have by what has already transpired.

To that end, this weekend brings a few good opportunities to connect with the broader community, including the long-awaited BRIC Celebrate Brooklyn! Festival, a two-night, virtual affair emceed by the hilarious Michelle Buteau and featuring performances from people like ?uestlove and Common. Smorgasburg, that mainstay of summer in Brooklyn for the last decade or so, is back with a new COVID-friendly, takeout-only format called ‘Smorg To Go that’s open 7 days a week if you can’t take another of your own home-cooked weeknight dinners. I read about it here, in a new weekly series of NYC Staycation guides featuring itineraries throughout all 5 boroughs that give you the latest news on what’s open and how to get back in the habit of exploring this fine city of ours. Like many local businesses, Rooftop Reds in the Navy Yard has been working hard to adhere to safety guidelines, and as of this week they’ve reopened their Tour & Tasting program for anyone craving an evening of wine & cheese. And Transplants Comedy Show, which features local comics telling jokes about how they got to NYC, has moved outdoors to Q.E.D. in Astoria on Saturday nights. Finally, I was riding my bike in Fort Greene a few weeks ago and stopped to take pics of a notably cool-looking mural being shellacked to the side of a building, only to read this week that it’s actually an interactive piece of street art by JR, who was the subject of a recent Brooklyn Museum exhibition, that you can now explore with the help of your smartphone.

If you’re staying indoors, I’ll throw in a recommendation for the surprisingly original and reflective of my current mood Palm Springs on Hulu, which I finally watched the other night, as well as I May Destroy You on HBO, which I’ve just started but feels revolutionary so far. MoMA’s film department staff released an intriguing list of films they’ve discovered and enjoyed during quarantine, which looks pretty intriguing, or you can check out some of our very own contributors’ new music picks as you tool around your place wondering if you’re ever going to get around to cleaning out your closet. Finally, I still can’t read a book these days, so writing fiction seems ambitious, but I’m bookmarking this piece from Curtis Sittenfeld about how to write a short story for (hopefully) more productive times that lie ahead.

I guess my bummer of message this week is that the aspects of the great raw deal that is 2020 that feel scary and sad are relentless and unavoidable, and not only is it OK to let ourselves face and accept them, but we kind of have to at some point. Just as it’s now universally fine—nay, responsible even—to eat a lone popsicle for dinner every once in a while or to embrace a part-time showering arrangement, it is also necessary to understand the true scope of the multi-faceted crisis we are facing so that we can truly band together and help each other through it. Today I feel fragile and need to lean on others but tomorrow I’ll be back in fighting shape and ready to shoulder some small part of someone else’s burden. As a random woman was completely justified in reminding me the other morning when I walked past her with my dog, keep your masks up, Brooklyn! You’re doing the best that can possibly be expected of you.