As schools begin to reopen, homeschooling is back on the table. Even if an in-person classroom is on the horizon, parents are starting the school year with the herculean task of being a parent, a teacher, and either running a household or holding down a job—or both!—all at once. There’s no getting around the difficulty of this mix, but there are some tricks that can make the process a little bit easier for everyone involved.

Children have a lot of emotions right now, and managing those feelings on top of getting them to play on their own or do their work, so you can do yours, are the biggest hurdles of pandemic family life. For young kids in particular, the quarantine has exacerbated clingy tendencies, difficulty sleeping, and regressions in development like sudden bathroom accidents. Parents of kids under 5, meanwhile, are more stressed and moms are bearing the largest burden of all, as their careers are undermined by providing the lion’s share of caregiving.

Early childhood learning specialist Emily Andrews of Here and Now Kids, a Brooklyn Heights-based early childhood education and parent support service, has some pointers for getting through the day with younger children in a way that makes everyone feel happy and sane. Here are some takeaways, for toddlers through early elementary school learners: 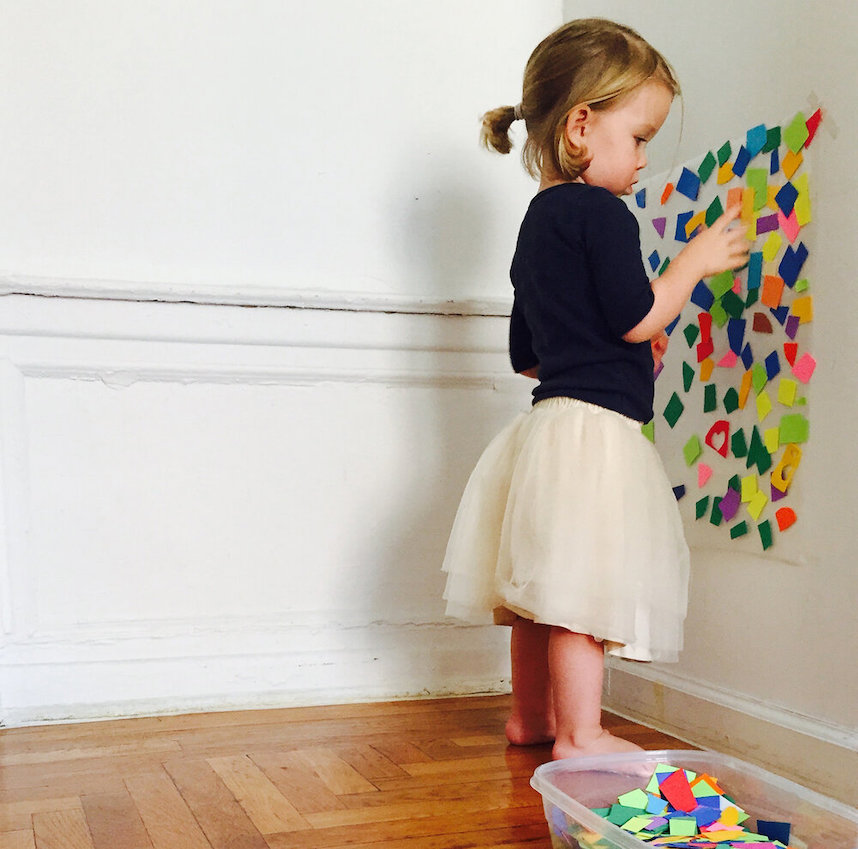 Your child’s ability to play alone is critical during this time. Here and Now Kids’ Emily Andrews emphasizes creating a daily routine to encourage it. Photo: @hereandnowkids

To take time for yourself or your work, your child’s ability to play alone is critical. The most effective way to get kids interested in independent play is to make it part of the daily routine.

First, start with short sessions together. Encourage their imagination, but don’t give your own ideas–it’s about your child learning to expand on their own, so you’re just there to guide the thought process. Ease into walking away to “get a snack” or something when a child is absorbed on their own. Once daily play and a desire to be independent are established, you can start to lengthen the time. Start with fifteen-minute blocks of playtime. Stop when you say you’ll stop – it keeps the session from feeling like exile.

Since independent play should be seen as a treat (and not a punishment like time out), make sure little builders have tinkers to work with, while budding artists can make masterpieces from materials they already enjoy. Math books, puzzle books, coloring books, or whatever your child is into, should be available all the time–you never know when inspiration will hit. 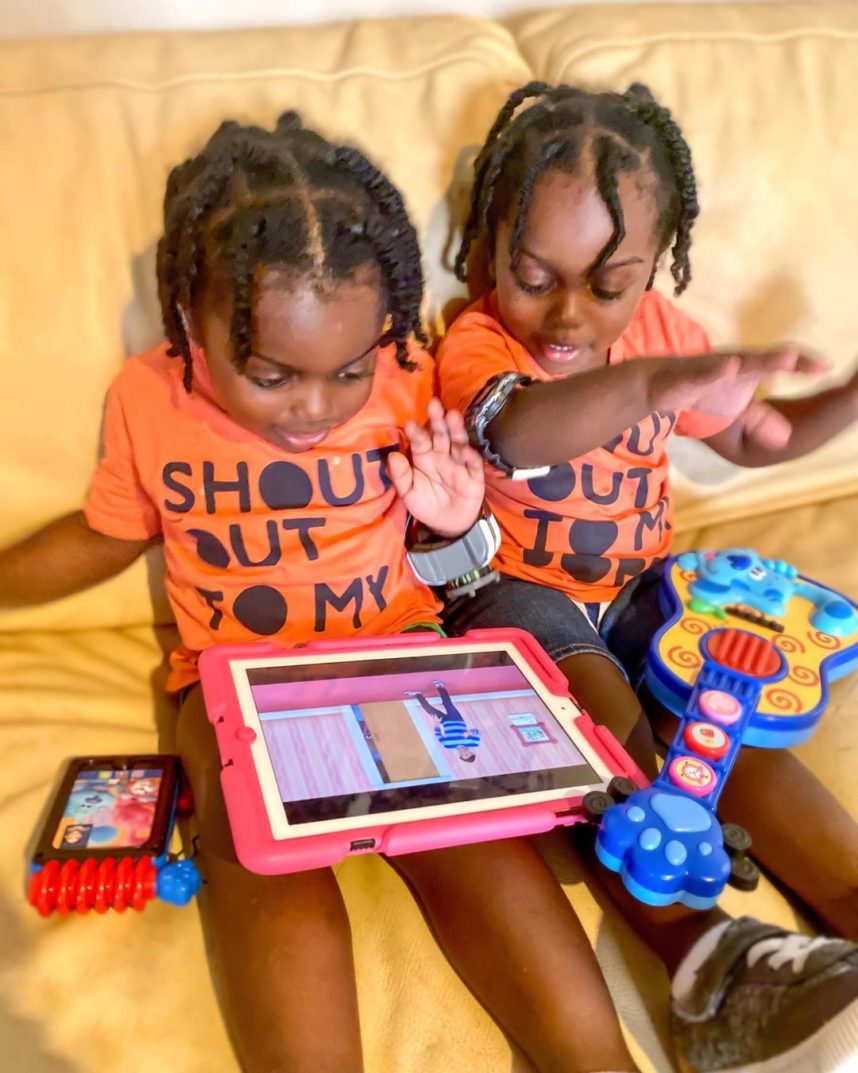 Show them screens aren’t the only fun thing in the house. Hand it over after a fun activity, not a chore. Photo: @twochocolatefaces

Strike a balance with the screen

First thing’s first, give yourself a break. If you have screens, you’re going to use them to an extent, and that’s okay.

The good news is that after independent play is established, you’ll already have non-screen activities integrated into the day, which will help a lot. Another tip from Andrews is to keep several bags and baskets filled with activities and toys tucked away on a high shelf or put away in a closet to keep the items novel. When a child needs something to do, pull a basket instead of resorting to a device. Try pairing two play materials or objects that don’t typically get played with together for some new inspiration.

Examples could be pairing Playdough and Legos, or a bowl of water and dinosaurs, Magna tiles and tea lights.

The screen doesn’t have to be seen as a totally evil thing, either. There’s plenty of educational content online, and you can use it to extend the school curriculum. If there’s a class unit on animals, queue up a show on elephants or a safari.

When you do use the screen, don’t just hand it over. Instead, create a rule that screen time is earned. Make a deal to offer the screen after an activity of choice is complete–a fun activity, not a chore. Let the child choose from several options. This tactic takes the emphasis off the screen being the only fun thing around the house. It gives them something else to do independently, too.

That said, Andrews doesn’t recommend screens early in the day, as it can negatively affect stamina and increases the likelihood of negative behaviors when taken away (read: massive tantrum). Shoot for afternoons and early evening sessions when possible. Whatever rules you instill, do your best to really stick to them; otherwise, your child won’t be as accommodating. The words, “but we did it yesterday,” will haunt you forever. 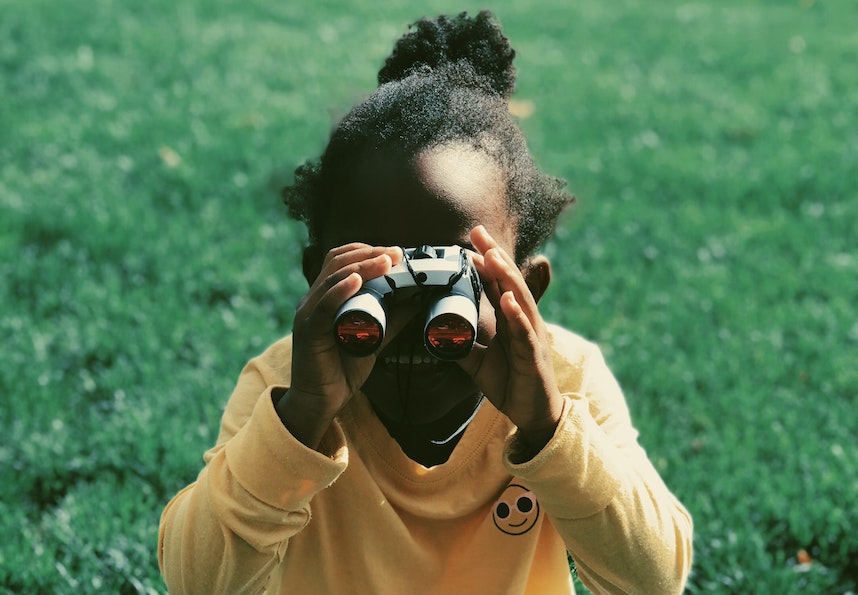 Andrews recommends extending activities through the week. A pair of binoculars, for instance, could be used to explore something new each day. Photo: Kiana Bosman on Unsplash

It sounds obvious, but consider what makes your kid happy? Yes, the iPad holds a special place in their heart, but dig beyond the screens. Chances are you’ll come up with many things that excite your child. In considering what your child enjoys, patterns will start to emerge. They’re super social, or they really like family events, they’re into animals, or they love to make-believe.

To take these commonalities and bring them into your child’s pandemic life will depend greatly on your own schedule and what you can actually do, so be realistic. One weekly activity is a great place to start if that’s possible. It can be hard to translate a passion into an activity but think about how the physical world can accommodate a housebound kid. Pay attention to your child’s emotions. Are they feeling cooped up, lonely, or sad? Try to dream up an activity that might alleviate those feelings together. You can then expand into a realistic activity.

An eight-year-old who’s into cars, trucks, and motorcycles would enjoy a field trip to the mechanic to see the work done in person. A four-year-old might love crafts and have a sense of adventure. Consider making fairies throughout the week that will be used for a scavenger hunt in the backyard over the weekend. A trip out of the city into nature can unleash the freedom and independence that a child might crave.

Andrews says you can extend an activity to draw more excitement in the long term. “Let there be some anticipation, and then reflect and document afterward. Ultimately, it’s not about giving things to your child but about staying very attuned to their feelings.” If children feel understood, you’re halfway to happy feelings. “Of course, it’s also easier for your child to be happy if you are happy—so take care of yourself, check your anxiety, and manage your emotions as best you can. No parent is doing this perfectly, but just be aware.” 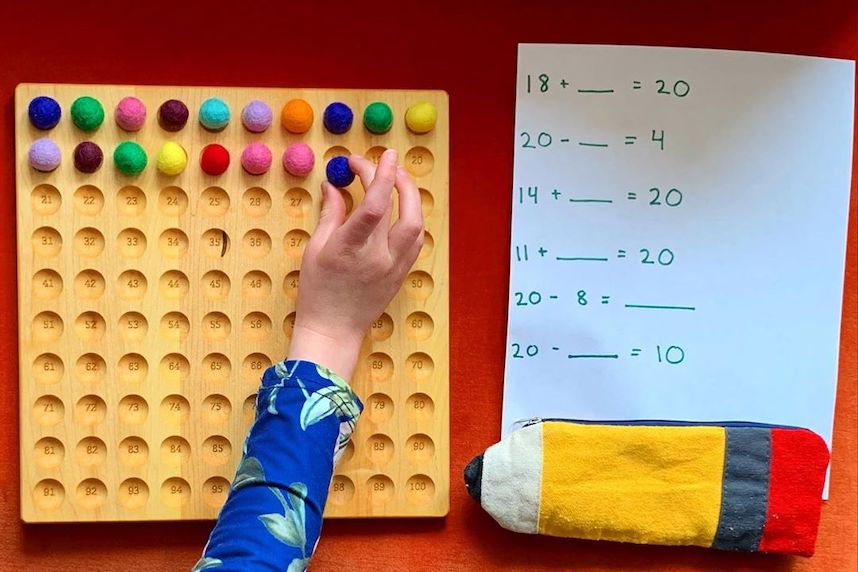 Encourage their ability to focus on school

Being at home instead of the classroom is unfamiliar to children, and the expectations are definitely blurry. To encourage kids to focus on classwork at home, Andrews says building confidence is the way to go. That is, go with their strengths.

How does your child learn? Some kids need a visual, while others are physical. Andrews integrates tactile elements to help one of her daughters do math, like felt balls and a wooden hundred board to work out addition and subtraction problems off of a screen lesson.

Alternately, if your kid has a killer vocabulary but is stuck on a math problem, you could ask them to write out the math problem as a story, so they can come to the solution through their strengths. Applaud their storytelling over the math – it’s the thing they already feel great about, so make sure it’s known they are a star.

Don’t forget, though, that in a classroom, if your child isn’t paying attention, the teacher isn’t going to stop teaching just because your child is gazing out the window. Kids don’t receive constant direct feedback in the classroom. Everyone has to give a little. And now that means you, too. Accept the daydreamer and let them dream. Yep, don’t force them to do the work if that’s not in their mindset right now.

Overall, if you cater to how your child learns, instead of trying to make them learn the way you think they should, it’ll be a much more successful day. Focus happens best when a child is learning in ways that work for them as individuals.

Alleviate their fears of in-person school

It’s only natural to think about how all this impacts your child’s social and emotional development. In terms of meeting developmental milestones, though, Andrews doesn’t think this experience will result in too many setbacks. Still, high emotions can be expected. The prospect of school may have some children experiencing fear, anxiety, and even old feelings from the early days of quarantine. It could be children have some discomfort initiating with other kids, or fear of joining play. But Andrews is hopeful that over time, positive experiences will alleviate these strong emotions.

When the big day comes, you may need to do things like sending your first grader to school with a lovey in their backpack as a comfort, which is not typically needed at that age. That’s okay. It’s more important to look at where they are and what they’re feeling, doing, and interested in today rather than worry about development and emotional milestones. Give kids what they need to feel loved, secure, and supported. This chaos won’t break them; they’re a resilient bunch, and soon enough everyone will be back on track.