What defines a villain? Is it true malicious intent, lack of perspective, or poor positioning within a stranger’s story? Think back on your childhood heroes, the underdogs who climbed the ranks to end up champions. Does the status of winner suddenly create a new villain for the next opponent to overthrow? Taking us along for the tale of villainized rival turned washed-up hero is Cobra Kai, the answer to whatever happened to Johnny Lawrence (William Zabka) after he lost the glory of being the All Valley Karate Champion to Daniel LaRusso (Ralph Macchio) 34 years ago. 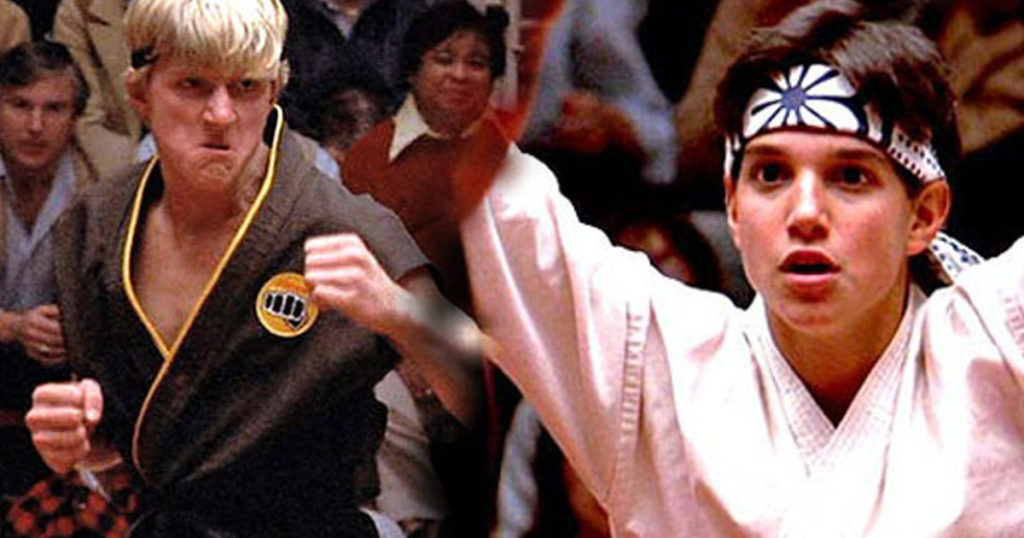 How did Daniel beat this guy? Photo: Columbia Pictures

We enter the Cobra Kai universe via a flashback dream to that fateful face kick that knocked Johnny into second place, and brought his dojo to ruins. He awakens, facedown on a dirty bed, hungover and starting his day with the breakfast of broken bachelors: fried bologna and last night’s warm beer. All that’s left of his glory days are the trophies at the bottom of his closet, and a Firebird that’s as weathered as his liver. He’s unhappily headed to a contracting job…just as soon as he tosses a contractor bag of empties in the dumpster. He’s met with a new young fatherless neighbor, Miguel (Xolo Maridueña, who you might recognize as Victor from Parenthood) who attempts to chat him up. Johnny with his toolbox meeting Miguel, strongly shadowing the meeting of Daniel and Mister Miyagi from the franchise origin. Except Johnny is rude, seemingly racist, and an actively unapproachable alcoholic. He’s barely out his driveway before being met by a huge billboard of Daniel LaRusso, inexplicable former champ turned owner of multiple car dealerships, who never gives a karate pun a kicking chance to escape his ads.

Of course, before the end of the first episode, a series of fortuitous events has Johnny and Daniel once again crossing paths. Except they’ve flipped the script on us, and now Daniel is a smug prick. A wholesome one, with a bonsai tree for every customer, a seat on the All Valley board, a beach club membership for his model nuclear family, and a burgeoning Messiah complex. I recognize a prick when I see one, and after witnessing a few schemes to foil Johnny throughout the series, I’d love for someone to tell me I’m wrong. Challenge dropped. Johnny, with something to prove, turns into a sensei, and Miguel into a student tasked with tech and sensitivity training this freshly minted mentor. We get a glimpse of a tragic home life that made young Johnny seek out acceptance at the dojo, and stagnated his emotional development. And we experience the joy of watching two grown men have full-blown karate-fueled midlife crises. Which is likely more pleasant than being Mrs. Amanda LaRusso, picking up the slack at the dealership, and continuously having to utter statements like “Oh, it’s fine. They’re in warring dojos” when her husband and his childhood rival are in a room together. 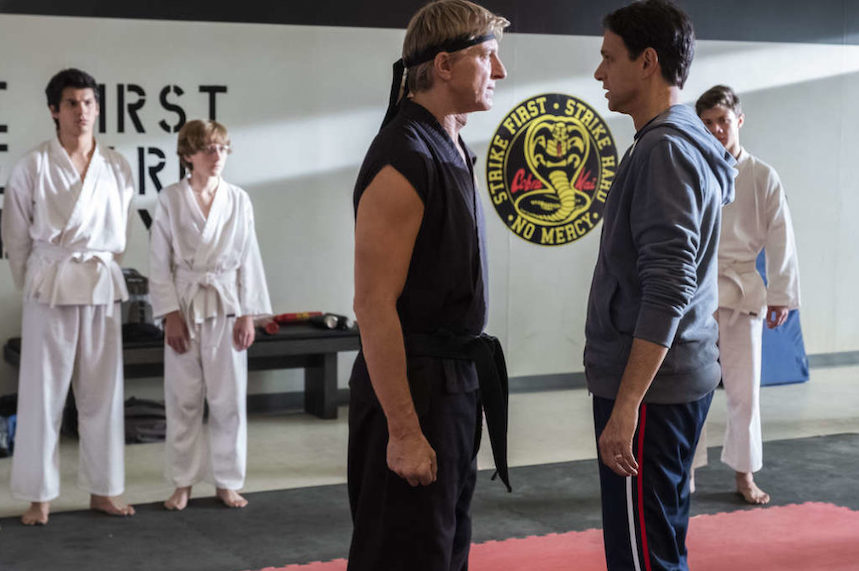 While Daniel spends two seasons all up in Johnny’s gi, we’re treated to audio/visual callbacks to the original films. Emotions are amplified by heavy synths and flashback montages set to 80s rock, and even after three decades, neither one of the guys will stop talking about Ali, the girl each of them respectively dated in high school. The young cast of new Karate Kids revive costumes and various regalia, while working on their own love triangles, daddy issues, and dojo-dramatics. Storylines and dialogue crackle with self-referential humor and delectable schlock, and it seems that in this universe, anyone might step back into the fold at any moment. Did I cry over the absence of Mr. Miyagi? There are no rules in this dojo…also known as my living room, where I’ve interrupted a third viewing to rewatch the first film, and honestly have to say: I have no idea how Daniel ever won.

The series had its initial run on YouTube Red starting in 2018, before moving both seasons to Netflix on August 28th of this year. Don’t be scared to invest in watching for fears of long pandemic-fueled delays. Season 3 is already being edited and set to release in 2021, so you can go down the YouTube theory rabbit hole for who to expect to return, and Easter eggs you may have missed. Being a fresh take of a story so heavily anchored in many of our childhood memories, and alternating between teen-drama, expertly choreographed fight scenes, casual slapstick, and grown-man grudge matches, this could be a great chance for a multi-generational binge.