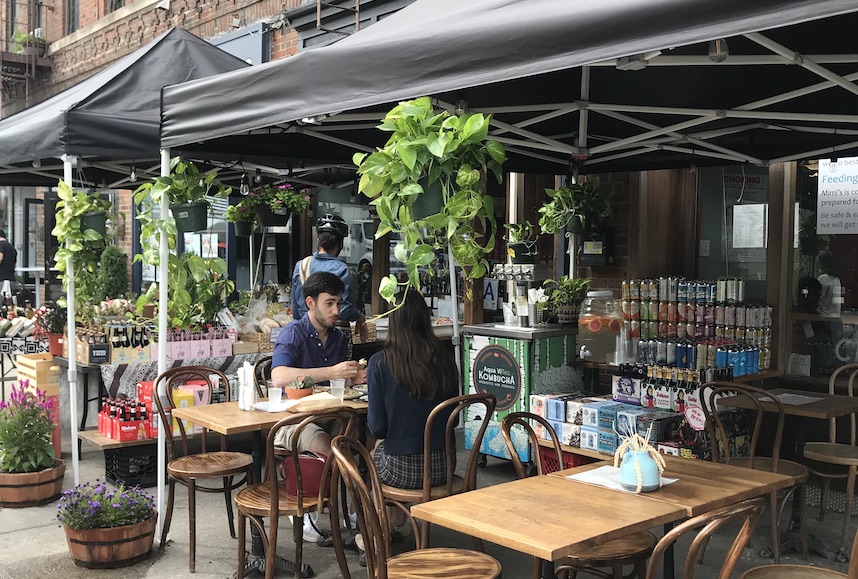 Outdoor seating at Mimi’s on Cortelyou Road, where restaurant owners will be serving outside as long as humanly possible. Photo: Regina Bresler

As summer closes, and we see which of our favorite restaurants and businesses have been lucky enough to pull through the brutal economics of the pandemic, a visit to Ditmas Park’s restaurant row offers a surprisingly hopeful picture. The neighborhood is a special slice of Brooklyn, nestled between downright bucolic visions of flowering lawns buzzing with bees, and automotive shops lining Coney Island Avenue. Now that city officials have extended outdoor dining permanently, we’re keeping our fingers crossed that Cortelyou Road gets to stay as quaint as it currently is, perhaps with the aid of some heating lamps and the persistence of patrons seeking a place to people watch and spend time away from their kitchens.

Established favorites like Purple Yam, whose traditional Philipino fare earned a Michelin nod; Lea, which serves housemade pastas and wood-fired pizza; and The Farm on Adderley, whose farm-to-table menu and expertly mixed cocktails helped establish Cortelyou as a dining destination, all have existing outdoor spaces, so potential changes to the sidewalk permits won’t affect your chances at dining on-site too much. For the first time, though, The Farm on Adderley has made their meals available for delivery. 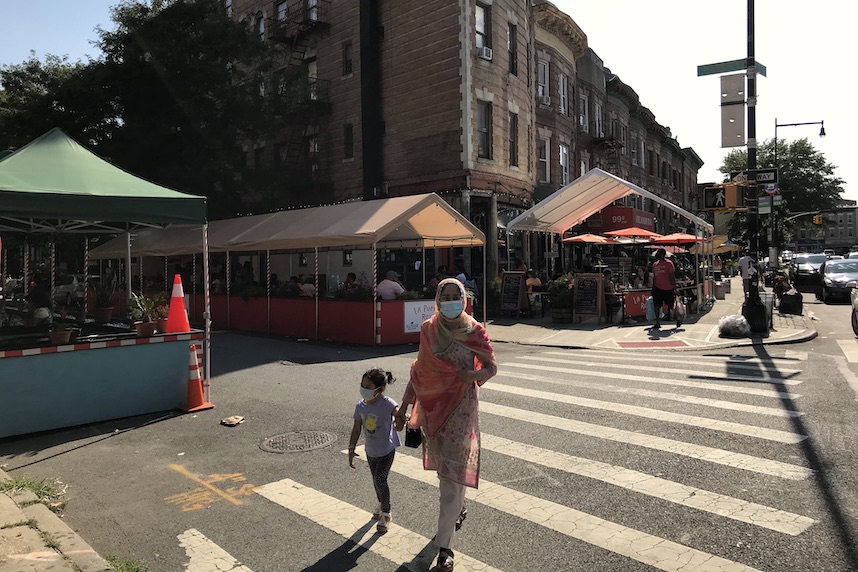 The scene on Cortelyou and Westminster Roads paints a hopeful picture for the neighborhood’s restaurants. Photo: Regina Bresler

La Puerta Roja, a Latin bistro boasting Mexican, Colombian, and Dominican flavors sits corner to corner with traditional Mexican cafe Cinco de Mayo, and both currently fill up Westminster Road with wide patios and music wafting in the air. A few doors down, the return of Bar Chord and their beloved backyard (with planned, occasional acoustic sets) is keeping neighborhood morale high, as is the reopening of Sycamore Bar & Flower Shop, which is again serving brunch in the garden. Highbury Pub has built out some window seats for easy beverage access and some footy on the screen.

Across the way from Cinco de Mayo, neighborhood stalwart Mimi’s Hummus has set up a darling outdoor spread, including produce, on-tap kombucha, and a variety of za’atar spiced breads, all leading into their now-expanded market where you’re welcome to bring home their pre-packaged menu staples like Mujaddara (lentils, bulgar wheat, raisin, scallion, and onion), merguez and Mediterranean cheeses if you’re not enticed by their cozy al fresco set-up. Flanked on either side of Mimi’s is The Castello Plan, with its very reliable and formidable weekday brunch offerings, and additional sidewalk tables to supplement their existing yard, along with a new kid on the block, the wine bar King Mother, which opened at the end of December. Their wine menu consists of natural, organic and biodynamic options, along with a Frose and a Frozen Spritz you’ll happily sip while snacking on charcuterie. If space outside is tight, you can take sandwiches like their plump and juicy schnitzel to go, or order from their newly launched delivery menu (for those within 3 sq. miles), which includes all their whole bottle options. 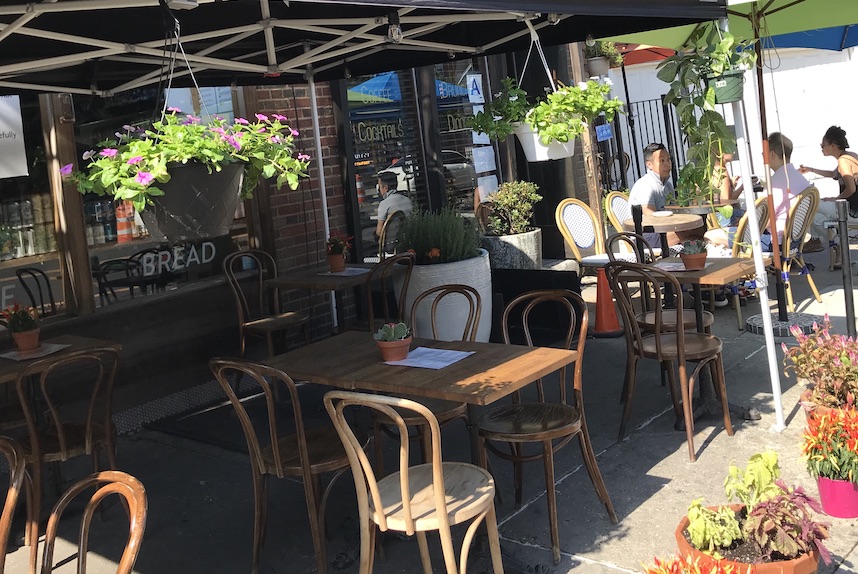 Next door to Mimi’s The Castello Plan has expanded to the sidewalk with bistro seating. Photo: Regina Bresler

Thai spots like the much-lauded MondayOff By Plant Love House continues to offer favorites like Hor Mok Pla, a seafood custard served in banana leaf cups, and crabmeat fried rice on their patio, with an all-day happy hour. CorTHAIyou serves classic Issan dishes in their backyard, and I’m happy to report that my personal favorite, Cafe Tibet, is still open. Devoted regulars are now limited to their outdoor space overlooking the Q-train platform, with its canopies of trees and surprisingly pretty gates. 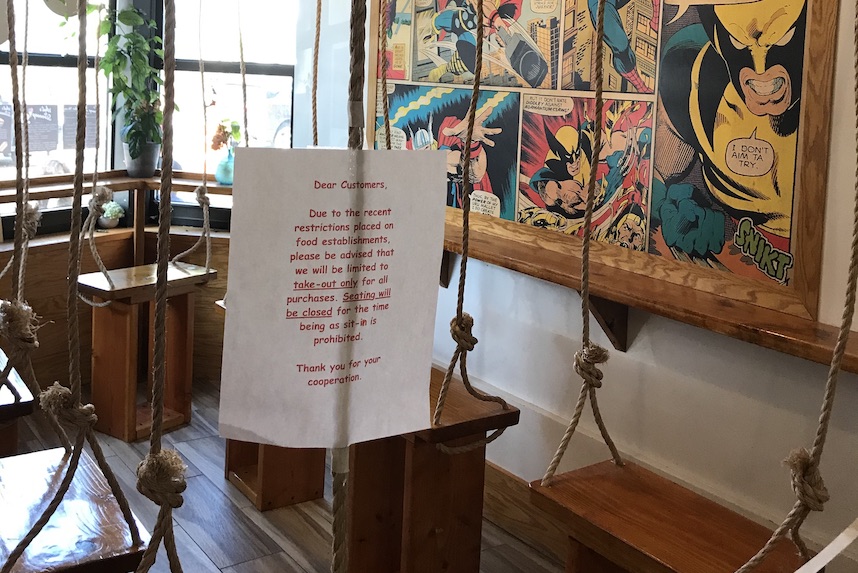 The swinging seats at What’s the Scoooooop? are tantalizingly off-limits for now. Photo: Regina Bresler

Another newcomer that opened in January is What’s the Scooooop?, an ice cream shop offering traditional and vegan options for scoops, shakes, and a variety of waffle cone flavors, along with a savory menu consisting of fresh-made Onigiri and Banh Mi. Colorful animations decorate the walls and a window alcove lined with comic book pages and swing-seats, currently off-limits, likely have kids begging for a return to check the status. The newest addition to the block is Loony’s Juice Bar, offering all-organic juices and smoothies, along with sandwich specials and more lunch options to come (I visited a few days after its September 14 opening, and menus were still being written). Bound to serve the area well, the juice bar shares the block with local gift shop Brooklyn Artery and Pilates on Cortelyou, which is providing open-air classes, and the decidedly less calorie-conscious Andrew’s Classic BKLYN Luncheonette, where you can order patties stacked to your heart’s content, hot dogs, and shakes to go. 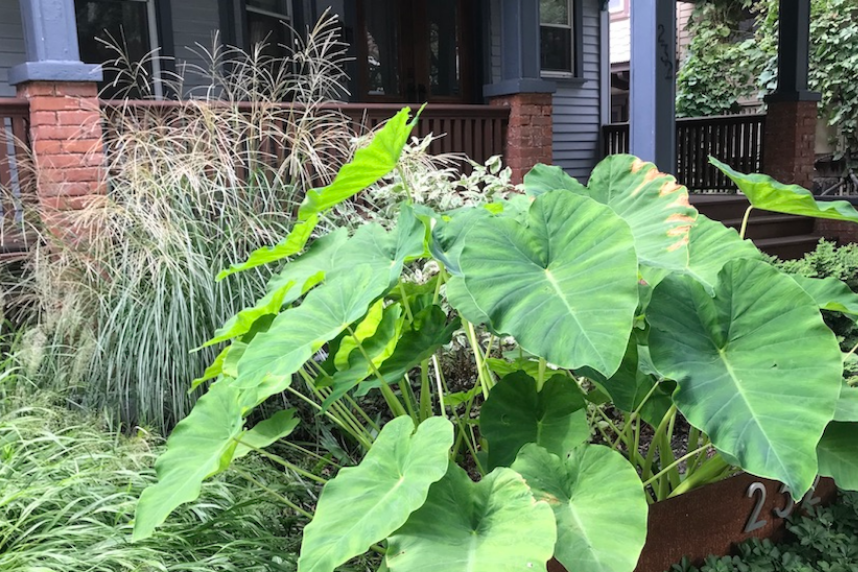 You can’t visit Ditmas Park’s restaurants without a detour around the beautiful blocks of Victorian homes and lush yards. Photo: Regina Bresler

While many of those on Cortelyou have outdoor space, with or without the sidewalk permits, restauranteurs like King Mother’s Katie Richey and Erika Lesser are staying optimistic that the city will extend permissions beyond the current October 31 end date, just as they’ve done before. Says Richey, “Given the circumstances, we’ve actually been doing really good, and are grateful to this community, and the opportunity to have the outdoor space. The neighborhood has been coming out and supporting.” 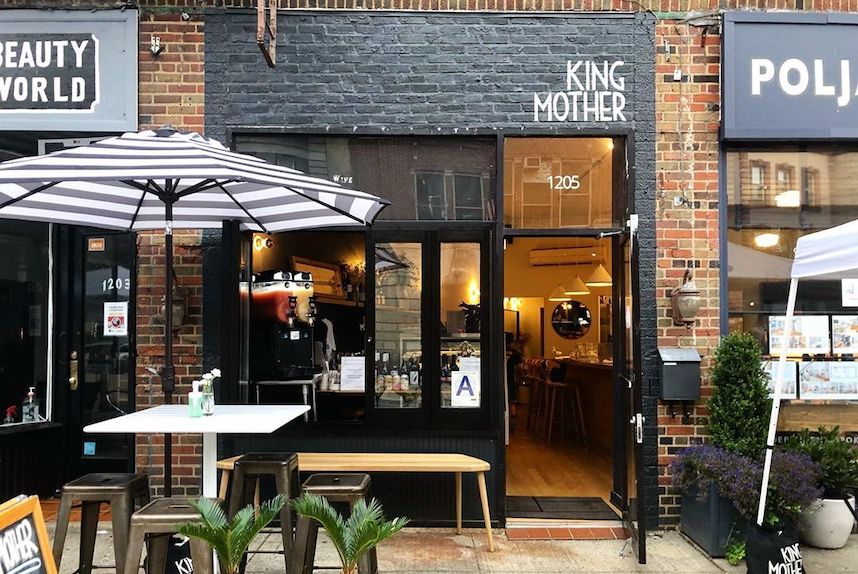 Asked about concerns moving forward into the cold months, she cautioned, “It’s not a productive line of thought [to expect the worst], the city isn’t going to leave us hanging like that. [Outdoor] is what we’ve gotta do, and what we’re all depending on right now. We won’t be doing indoor seating at 25%, it just doesn’t make sense for us. We’re just gonna focus on extending our hours and making good quality delivery available. We’ll reevaluate our indoor options come November, when it’s expected to be 50% capacity. We’re looking into heating elements. As long as we’re not under snowbanks, we’ll be outside.”