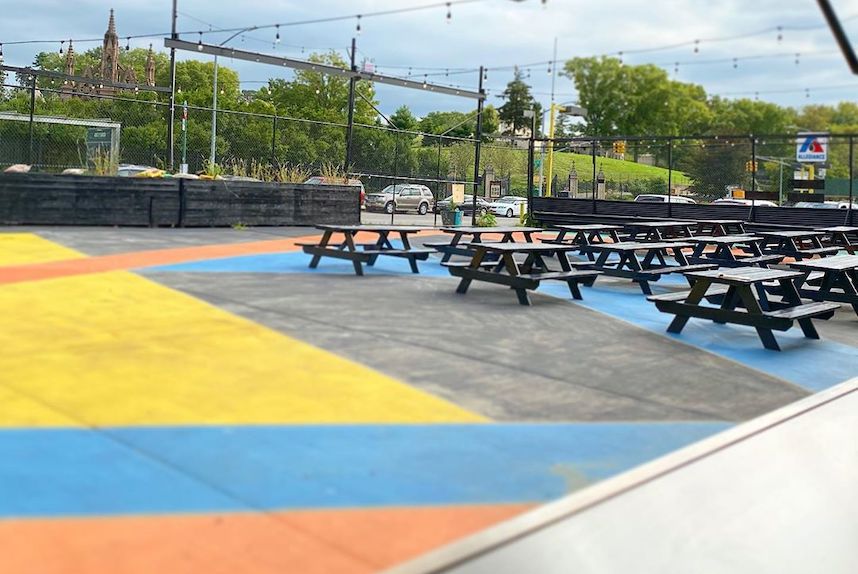 TGIF y’all, and here’s hoping you are all hanging in after a week that felt, much like everything else these days, at once terrifying and hopeful, heartbreaking and life-affirming, endless and also over before you’ve had a chance to even acknowledge it before being shoved breathlessly into the next chasm of unknowns. The news of RBG’s death was rough, and I spent much of last weekend convincing myself that it doesn’t automatically mean a second term for the cartoon villain occupying the White House. This week, I’m avoiding most media and trying to focus on the small things I can do to support my city and my country and my own mental health—it feels good to be fixed on positive, forward motion as much as possible. On the one hand, if I read another article that tells me I need to establish a routine and make time to meditate and master a new hobby my eyes might roll right out of my head; on the other, the thrill of playing the old “are these COVID symptoms or just a hangover?” game every morning has faded fast and I need to find a better coping mechanism.

One thing that has brought me lots of joy lately is eating out at or taking away from restaurants when I can, whether it’s sharing the entire dessert menu at a friend’s bday dinner in LaLou’s backyard, discovering the focaccia sandwiches at the new-to-me Un Posto Italiano in Park Slope, or sharing a picnic from Winner with some fellow Brooklyn Based colleagues (and a lot of off-leash dogs too) in Prospect Park earlier this week. I spent last weekend enjoying the spoils of the Jackson Heights take-out scene, and after a summer spent mostly upstate and in Maine, the ability to enjoy pho, palak paneer, maduras, and Sichuan long beans all in the space of two days felt absolutely decadent. I’m looking forward to an outpost of Bed-Stuy taco and beer spot Chilo’s opening around the corner from me in Greenwood this weekend, and am eager to see what’s doing in one of my favorite Brooklyn neighborhoods, Ditmas Park, after reading our post on outdoor dining options there. If I can play any role in ensuring that Eater’s running (and really depressing) list of restaurant closures is kept to a minimum, I’m in!

The weather this weekend looks great for checking out this year’s edition of Photoville, which is spread out over 60 different locations across the city, or heading to Green-Wood Cemetery for a live performance by The Harlem Chamber Players. The Dreamland Roller Disco opens for another season tonight in Prospect Park, and an intriguing-sounding performance of Phantom of the Opera premieres in Astoria’s new Broadway Drive-In at Radial Park. Oh, and if you can stomach it, Parklife is screening Tuesday’s presidential debate on Tuesday night in its expansive outdoor space. Personally, I’d rather spend that time phone-banking or something and head to Parklife the next night for a special screening of Black Panther in memory of Chadwick Boseman, and don’t sleep on the loaded queso nachos if you like delicious food.

If you’re not totally down for in-person stuff yet, BAM is hosting Draw From Within, a dance performance streaming live from London on Saturday night, and you can also watch the 2018 hit RBG documentary virtually starting today. Netflix’s The Social Dilemma is an absorbing and sobering exploration of the harmful effects of social media, and I finally watched Beastie Boys Story after being shut out of the sold out live show at Kings Theatre last year. Looking ahead, Atlas Obscura has recently released its first semester of online, multi-session courses, including something called Art World Muckracking: Investigating and Exposing Art Crime that sounds right up my alley. If you need a jolt of inspiration and pride in your fellow New Yorkers’ persistence and resilience, be sure to read this NYT story about the ways people have adapted and innovated in response to a horrific set of circumstances.

Earlier this week, when Meredith Craig de Pietro and I were walking back from our Winner picnic in the park, we happened upon just the sort of feel-good, pandemic-era vignette that the Times set out to chronicle. In the cramped front yard of an 11th Street brownstone, about a dozen musicians had gathered for what appeared to be band practice, and we stopped alongside other passersby to enjoy a riffy rendition of “Take me to the River” in the warm darkness of the late-summer evening. Here’s hoping you are similarly delighted by the unflappable creative energy of random strangers you encounter this week—we’d love to hear about it! Happy weekend everyone!