This year, we all seem to have a serious case of fall fever. Apple orchards and U-pick farms are reporting their busiest season yet as people seek out as much time in nature before winter shuts us in. Ticket sales for harvest and Halloween-y events are booming, and it can be hard to snag a spot at some of the most popular pumpkin displays or cemetery-wide performances.

But there are still plenty of ways to enjoy the season and its stunning displays of fiery leaves and glowing gourds. Here are this year’s peak fall experiences to take in, pandemic be damned.

Finding a ticket for the Great Pumpkin Blaze, the annual festival of carved pumpkins all aglow in Croton-on-Hudson, is hard to do every October, as fans snatch them up by September. But this year they have added a new location on Long Island, and the calendar is wide open. The setting is the Old Bethpage Village Restoration, a collection of 19th-century homes that will look especially spooky amidst the flickering jack-o-lanterns. The price is still steep though: Tickets start at $40 for adults, $32 for kids up to 17. 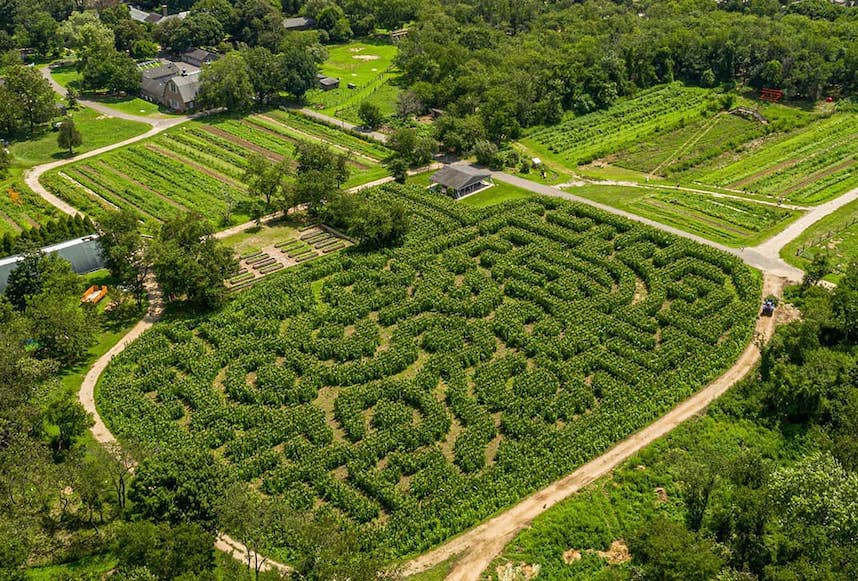 The theme of this year’s Amazing Maize Maze becomes apparent once you walk through it. Photo: Queens County Farm

NYC’s only corn maize, the Amazing Maize Maze, spans 3 acres and begins with a “Stalk Talk” to help lead you through the vegetal puzzle. Held at the Queens County Farm, tickets are affordable ($8-$12) and plentiful, and this year’s theme, Van Gough’s sunflowers, becomes apparent once you complete it. For a real show of flowers at the farm, including a giant pumpkin-spice latte, The Floral Escape is another installation to gram through Nov. 29.

3. Read the odes to the season, out loud

Before heading to the corn maze, be sure to read Colin Nissan’s ‘Corn Maze F.A.Q’ out loud, along with his other famous ode to fall, ‘It’s Decorative Gourd Season.’ We need all the laughter we can get right now. 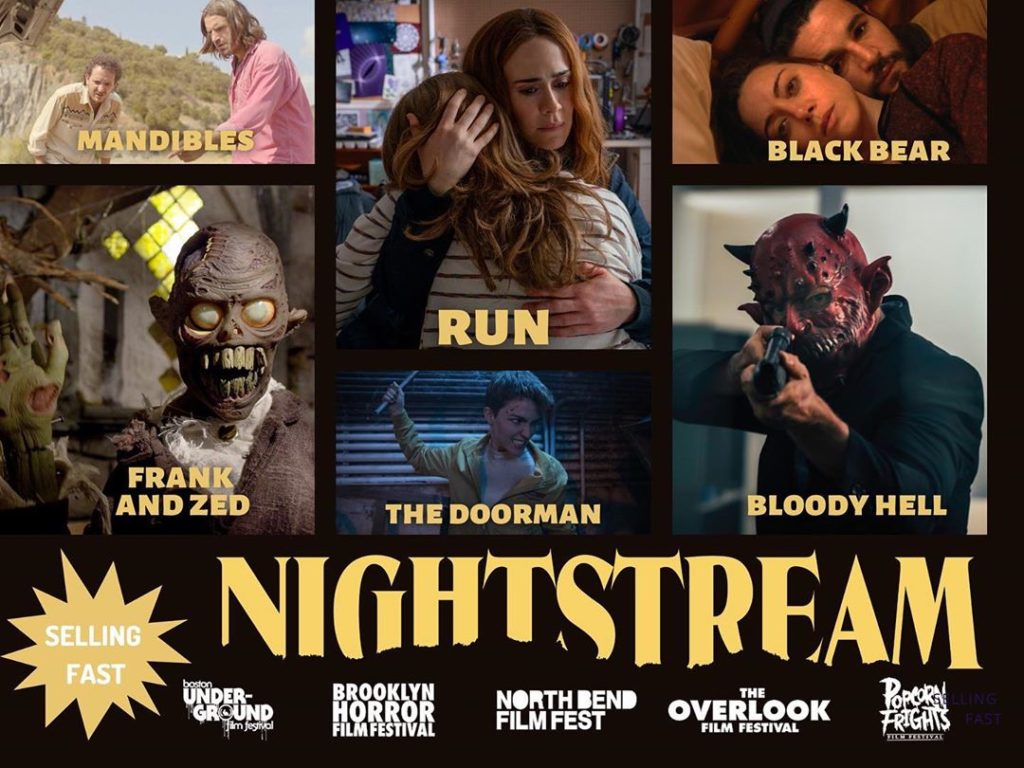 The producers of the Brooklyn Horror Film Festival banded together with four other horror fests to create the virtual series, Nightstream.

Understandably, there is a dearth of theaters to catch a horror film series right now. So the producers of the Brooklyn Horror Fest banded together with four other film festival creators to form a virtual series called Nightstream that runs Oct. 8-11 with 40 feature films, 160 shorts, plus panels and events. Tickets are charitable and go to the artists and filmmakers, the festivals themselves which had to recoup Covid cancellation losses, and to charities and small businesses local to each fest. For an in-person fright night, Syndicated in Bushwick is continuing its outdoor cinema this month with first-come, first-seated free 7:30pm screenings of classics like Hocus Pocus, Psycho, and Halloween. And our list of the best scary movies set in NYC can guide your own at-home horror fest.

If this recent New York Times story about the people heading to apple orchards and pumpkin patches in droves is any indication, the scene at nearby orchards is even more of a zoo than in years past.

So just be prepared for a different scene this year, as many orchards are skipping the annual traditions like hayrides and enforcing capacity limits. Start with this Hudson Valley Magazine guide to upstate apple picking and choose wisely.  Wilklow Orchards, for instance, requires you to reserve a timed slot to make the whole outting safer and less stressful, and afterward you can have a drink and a pizza at the farm bar and food truck. For the rest of the orchards that do not require RSVPs, it’s best to arrive as early as possible to ensure you are not turned away. 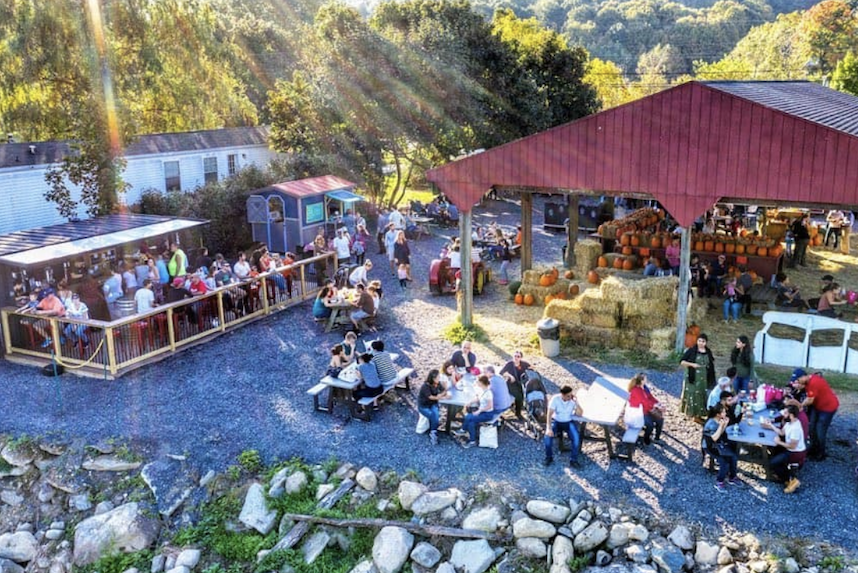 Why bother going apple picking upstate when you can go cider tasting instead? Bad Seed’s outdoor cidery and food truck in Highland, NY is open through October (and its sister farm is actually Wilklow Orchards!) while Twin Star Orchards orchard bar in New Paltz—complete with apple picking and wood-fired pizzas—is open through November. 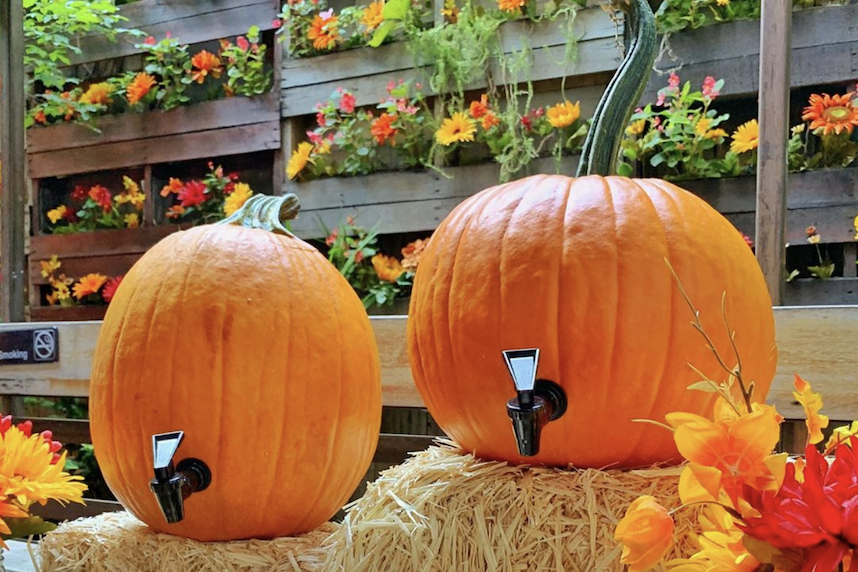 Despite the fact that I don’t really like Southern Tier’s Pumpking ale (I like a less perfumed, less potent pumpkin ale, like Montauk’s), tapping a pumpkin just screams ‘photo opp,’ and you can still get one at Loreley Beer Garden this year. Groups of 6 -10 can RSVP by emailing info@loreleynyc.com; otherwise, it’s first-come-first-serve, but in addition to the outdoor beer garden there is now street seating, too. 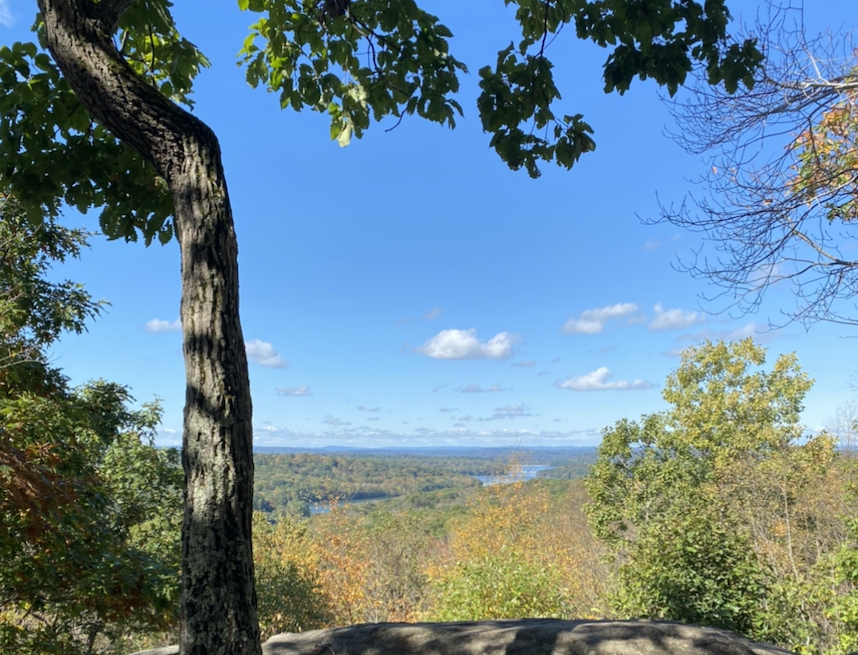 One of the most popular, true-to-its-name hikes in the area is Breakneck Ridge, but if you don’t want a serious scramble, Harriman State Park offers a lot of beautiful hikes a relatively short drive away from New York (and unlike Minnewaska, which charges a $15 day use fee, you don’t have to pay to park here). Another popular, close to NYC site is Ward Pound Ridge Reservation, with 42 miles of hiking trails, all dog-friendly (on leash), and generally flat and wide in many places, making it easy for kids. I hiked the Leatherman’s Cave loop last weekend, and while the cave was not as exciting as I expected, the overlook was a beautiful reward for the climb. Parking is $10, cash.

Or course, you don’t need to leave New York to enjoy the foliage or get lost in the woods. Take this secrets of Prospect Park walk or explore Central Park and its 18,000 technicolor trees. 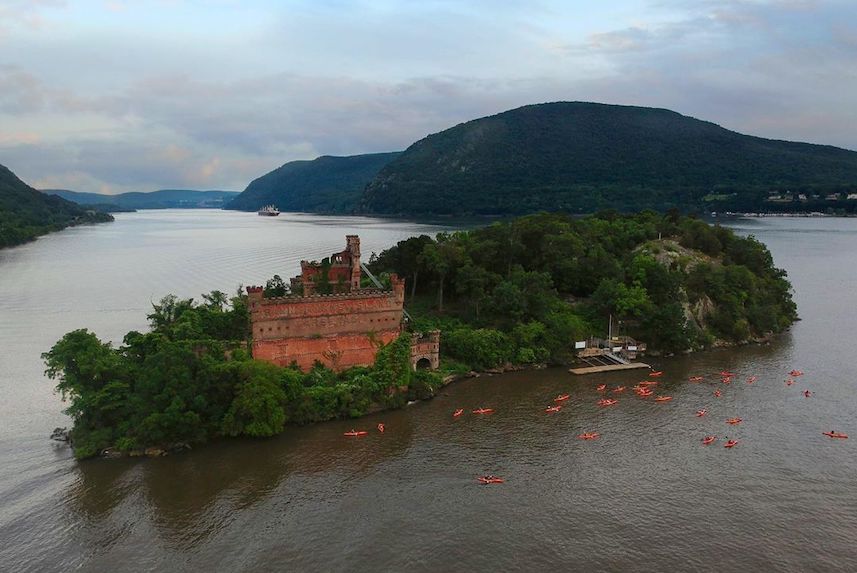 10. Paddle to Bannerman’s Castle (through October)

You really can’t get more socially distanced and scenic than paddling in your own kayak to Pollepel Island in the Hudson River to Bannerman’s Castle. Outfitter Storm King Adventures leads the 2.5 hour trip around the ruins of this 1900s castle, built by a Scottish immigrant turned Gilded Age tycoon. To set foot on land, you’ll need to upgrade to the 3-hour tour. Prices start at $70 and there are many more tours to choose from.

Near Woodstock, the open-air, land art project called Opus 40, is hosting its reimagined peak foliage soiree on Oct. 17. Tickets are much more expensive than in years past, starting at $100, or $50 for members. But it’s as much of an outdoor  festival as you can get right now, with live music, cocktails, small bites, belly dancing and tarot on the quarry-like property. 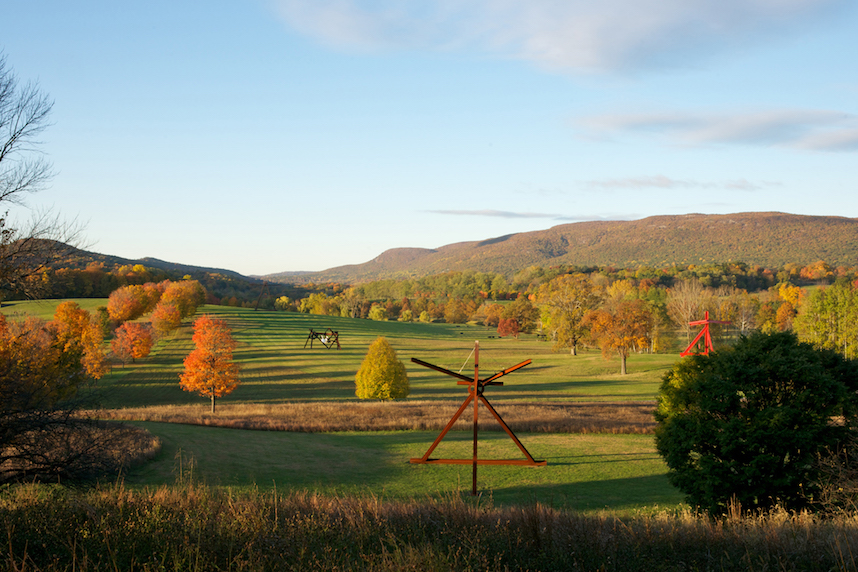 We’re fond of a day trip to Storm King any time of year, but visiting the grounds and its many sculptures and installations as the leaves show off their colors is a special treat. It’s easiest to visit by car, and right now the only place to park is in the overflow lot, where you will then take a 10-minute shuttle to the outdoor art center, featuring new artwork by Kiki Smith and Martha Tuttle. The cost of admission, which you need to book in advance, is based on the number in your car, and starts at $20. It’s open until Dec. 13 but get there this month for the fall colors. 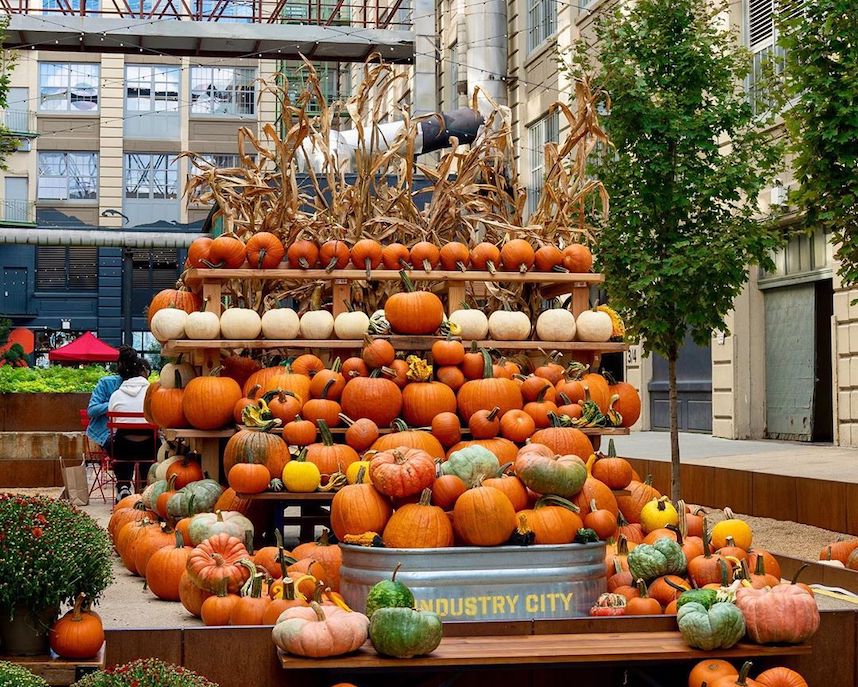 The display in courtyards 3/4 is the perfect backdrop for your pumpkin pics. Photo: @industrycity

13. Get pumpkins and pics at a local patch

Crest Hardware is not holding its annual carving contest, but you can still find a pumpkin here (and pose before their patch for a selfie). Industry City also has a prime display of pumpkins for your feed. 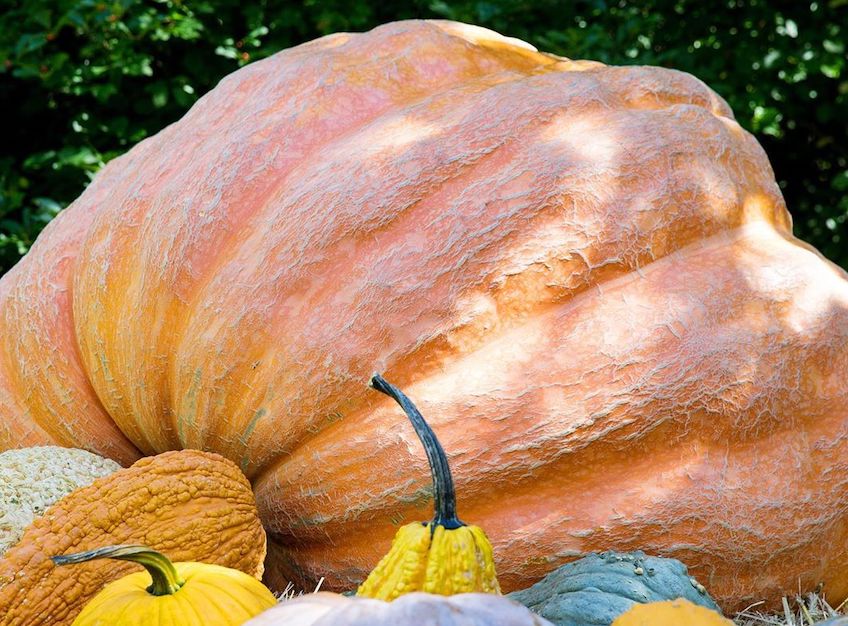 As part of the Great Pumpkin Path, on view now at New York Botanical Garden, it will hoist a few hefty gourds into the mix during its giant pumpkin displays Oct. 23-Nov. 1. After visiting the massive squash—some weigh in 2,000 pounds!—visit the Kiku exhibit of Japanese chrysanthemums inside the observatory. Tickets are timed and start at $15 for NYC residents. 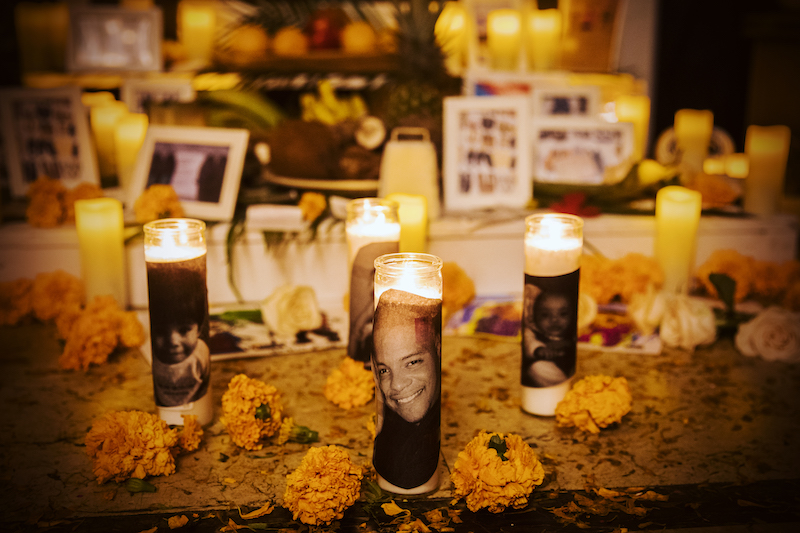 Nightfall, an immersive film/music/food/performance festival that Green-Wood Cemetery held for the past few years, has morphed into an event called To America, which, sadly, is already sold out. But there is an even more meaningful and free way to experience the cemetery this year, at its Day of the Dead celebrations Oct. 23 to Nov. 1.

Guests are encouraged to bring mementos of their departed beloveds to a public altar created by artist Scherezade Garcia. In a year of staggering losses, in a city hit the hardest by Covid, it will be a powerful display and chance for reflection.