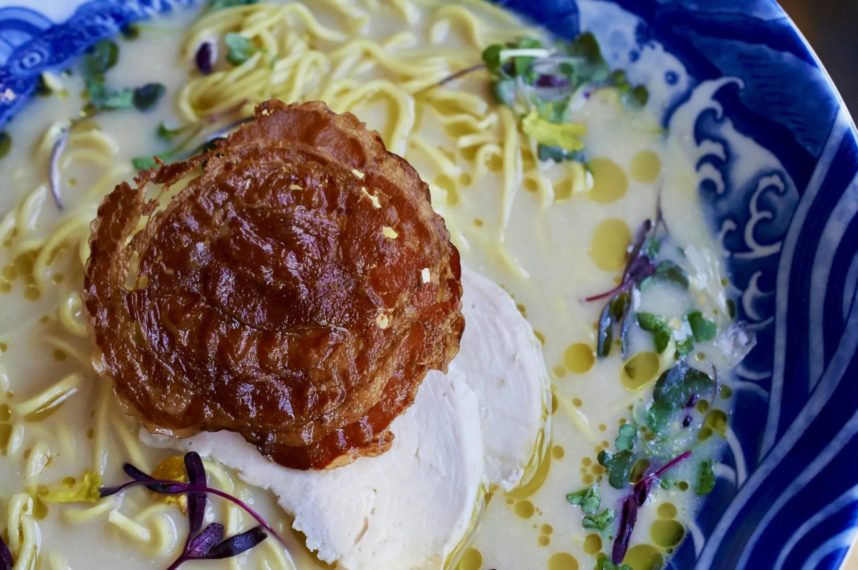 Soup season is back! For anyone who feels like they’ve been cooking non-stop since mid-March, it’s important to remember that restaurants make amazing soup. Don’t let your cooking fatigue deprive you of one of the great joys of fall. Here in Brooklyn, we are surrounded by a world of soup. It’s easy to miss the soup section on an online menu, but the comfort foods of many, many cultures are available for delivery and could be on your doorstep within the hour.

My favorite takeout hack is to order a full meal plus some bonus soup, which I’ll put directly in the fridge and reheat for lunch the next day. And while we’ve all got our local go-to soups (mine are the Chicken Avocado Soup from Cubana Café and the Avgolemono from Avlee Greek Kitchen), there are probably some amazing soups you have yet to sample. (And while you’re at it, to best support restaurants during these tough times, always check the restaurant’s website for a direct delivery link before ordering through one of the major delivery hubs, which take a significant cut of the restaurant’s profits.)

Here are 10 ideas that could expand your take-out horizons:

Located in the tiny old Battersby Space on Smith Street, Karazishi Botan is helmed by Fumihiro “Foo” Kanegae, who was formerly the ramen master at Ippudo. Nowdays, he balances traditional Japanese flavors with the influences of New York food culture. For the full experience (Boton bomboloni burgers! Mochi ice cream donut sandwiches!) you’ve got to visit the street-side or backyard seating, but there’s also a limited takeout menu with top-tier tonkatsu ramen alongside inventive options like the Tan-Tan Men, an umami-rich vegetarian bowl of spicy mushroom-based sesame brother with spicy soy “meat,” miso, and cilantro. 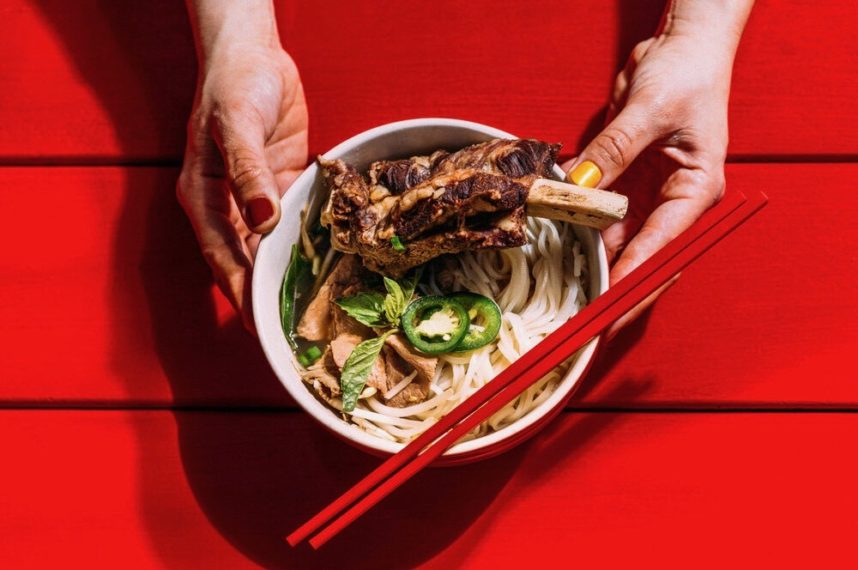 If you’ve been on Atlantic Avenue lately, you’ve probably seen the ample tented seating in front of Yemen Café, a neighborhood haven since 1986. The restaurant really stepped up during the pandemic, raising funds to donate meals to hospitals and first responders, serving up love in their soulful Yemeni fare. All the dinner entrees come with a free bowl of lamb or chicken marag, a rich-salty-citrusy simmering liquid, or you can order a fortifying bowl for $2. 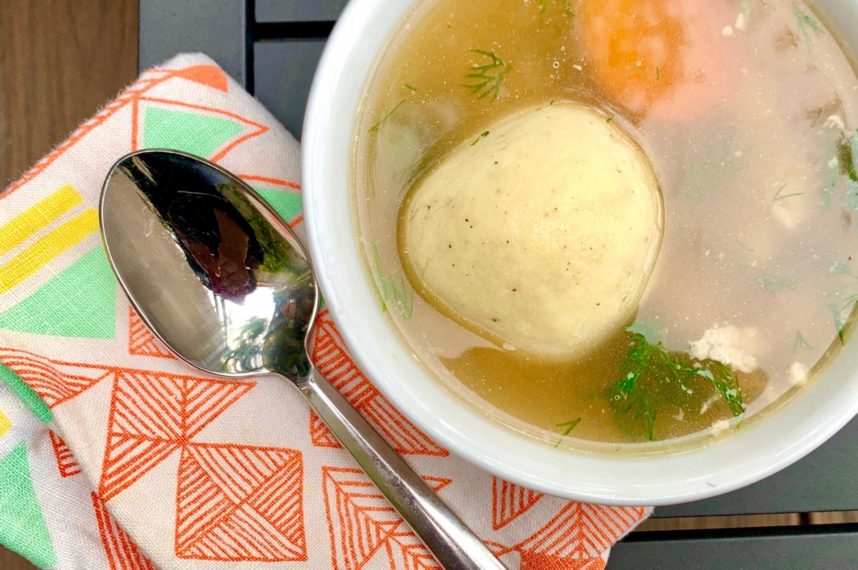 It’s no secret that Mile End‘s Matzo Ball Soup is a steaming bowl of comfort and joy, but if you haven’t ordered from this Boerum Hill Montreal-style Jewish deli in a while, you’ve got to check out the rest of their take-out and delivery menu. In addition to their stellar poutine and smoked salmon, you can get a ½ pound of braised brisket with jus, delivered cold to be reheated in your oven, weeknight specials, and you can pre-order a $30 Shabbat dinner anytime you want it, even if you’re not Jewish.

The rich broth and the sweet caramelized onions nestled under a canopy of melted cheese? Yes, please. It’s a meal in a bowl and one of those restaurant standards that’s a pain to replicate at home. Neighbors of Park Slope’s Olivier Bistro, located on 4th Avenue near 11th Street, say theirs is the best, but it’s probably safe to say that your favorite local French cafe has their own stellar version. 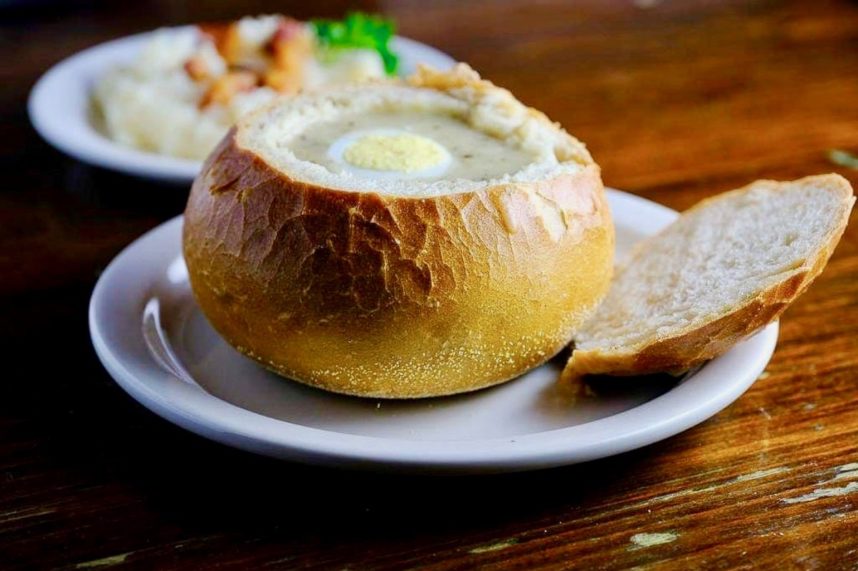 Packed with potatoes, bacon, kielbasa, spices, and a hard-boiled egg, this is not a light soup. It’s Poland’s take on comfort food, and you can get it at Greenpoint’s Karczma with a bread bowl for $6.50 or without the bread for $5.75. Here, the portions are big, the prices are low, and for kids who are too picky for pierogi and kielbasa, you can get a breaded chicken cutlet with a side of fries. The Karczma takeout and delivery menu also features drinks to go, from bottles of Pinot Noir to cocktails like the “Polish Mojito,” and Polish beers, including the hard-to-pronounce but easy-to-click-on, Zywiec.

Pozole might be the most soothing dish on a traditional Mexican menu. Its pork and chili broth is redolent of garlic and oregano, thick with white corn and hominy, and piled with fresh radishes and cabbage. This time of year, I dream of the pozole from Sunset Park’s Tacos Matamoros, but they don’t deliver to my house, so I’m setting my sights on Clinton Hill’s Ojala, a little Mexican spot whose name translates to “hopefully.”

You can get Columbia’s spin on chicken soup at Park Slope’s Bogota Latin Bistro. The traditional dish includes shredded chicken, papa criolla (tiny fried potatoes), an herb called guascas, and capers. It’s served with white rice and avocado, which are meant to be stirred into the soup. For anyone new to Bogota, you’ll also want to try their bandeja paisa, a Columbian feast of pork chicharron, arepa, rice and beans, fried egg, maduros, avocado, and cabbage salad with a choice of rotisserie chicken, ground beef, or skirt steak, with an optional add-on of chorizo or morcilla. 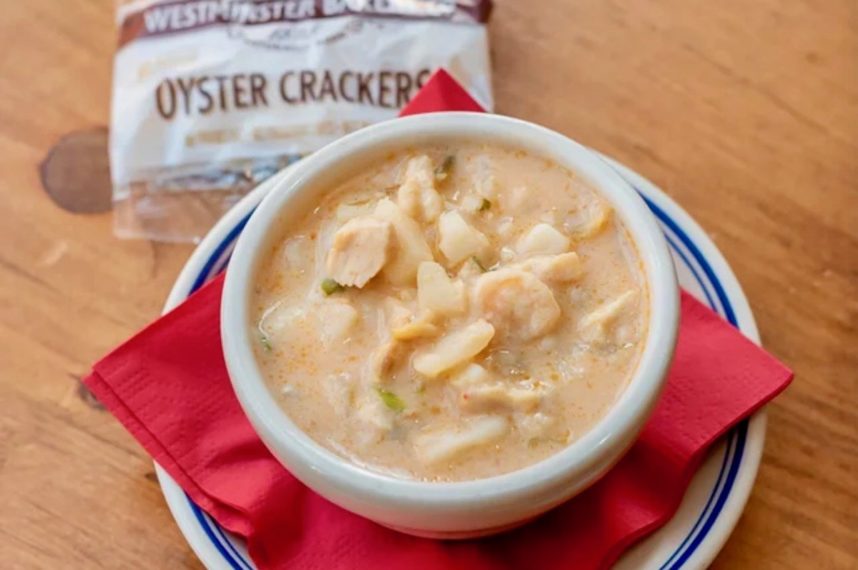 Red Hook Lobster Pound is known for their unbeatable lobster rolls, but when the cold weather rolls around, their Down East Clam Chowder is totally worth a trek to Red Hook. A generous serving of clams, haddock, shrimp, lobster, and mussels are stirred into a creamy tomato broth that bridges the gap between red, tangy, tomato-based Manhattan clam chowder and white, cream-based New England clam chowder. Seafood soup lovers should also check out the traditional New England clam chowder and the incredible fisherman stew at Littleneck in Gowanus.

Does it count as a soup when the soup is inside the dumplings? We’ll bend the rules for Mr. Bao, which opened on Park Slope’s 5th Avenue in late-summer 2020. Serving bright-colored handmade dumplings, shumai, popcorn chicken, and rice bowls, this spot is quickly becoming a neighborhood go-to. The steamed or pan-fried soup dumplings are filled with a blue crab and pork soup combo, or just plain pork soup.

Have we missed your favorite soup? Please share it in the comments!