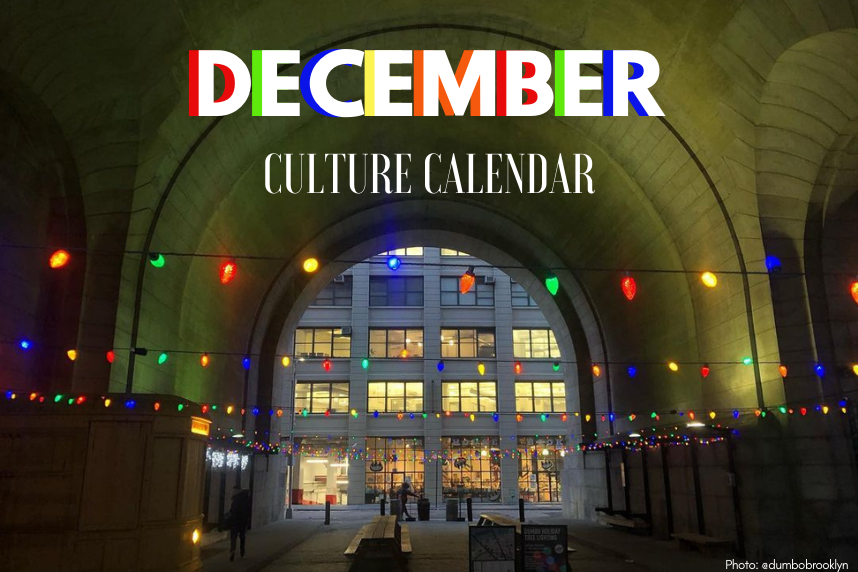 Oh, dear friends and culture lovers, I wish more than anything that I had better news to share about the holiday season that is now upon us, but unfortunately, it looks like we are heading into some dark days before the vaccine gets here and things FINALLY start to return to some semblance of normalcy. In the meantime, this is likely going to be a December bereft of in-person holiday parties, going to the movies, Christmas concerts, offline shopping extravaganzas, kissing new people under the mistletoe, beating back midtown crowds to see the tree, the Kwanzaa Crawl, New Year’s Eve parties, the Polar Bear Plunge, The Nutcracker Suite, eating Christmas cookies with a bunch of friends in front of your 50th viewing of Love Actually, and all of the other things that we took for granted every other year before 2020 came along and demanded that we live our lives in our overpriced, undersized apartments for months on end. On the flip side, the pandemic managed to get Santacon canceled, so it’s not ALL bad news. But I would gladly volunteer to sit at the bar at Rolf’s surrounded by screaming drunken Santas from Murray Hill all day every day from now until December 25 if my doing so stopped the surge of infection rates.

That’s not an option, though, so instead we’ve done our best to round up a variety of ways to keep yourself occupied—while staying safe—in the month ahead. In addition to the events and activities listed below, please consider spending some of the free time you might have on your hands during this normally jam-packed month to lend support to the many fellow Brooklynites who are struggling right now. Shop online at small local businesses instead of Amazon, order delivery from your favorite neighborhood restaurants and bars, support Black-owned businesses, deliver homemade treats to healthcare workers, send a kind letter to an isolated elderly person, or check out this list of other ways that you can help the city we all love get through to the other side of this uniquely hellish period in its existence. Most importantly, be kind to yourself and pay special attention to your mental health this month—the holidays can be hard enough in normal times, this situation presents outrageous additional challenges. We are getting there, we really are, and everyone should give themselves a giant pat on the back for choosing to be strong and gracefully adapt to an impossible set of circumstances. Then, if you’re so inclined, retire to the couch with a pint of ice cream to watch a crappy Lifetime movie (or whatever the equivalent of that is for you). 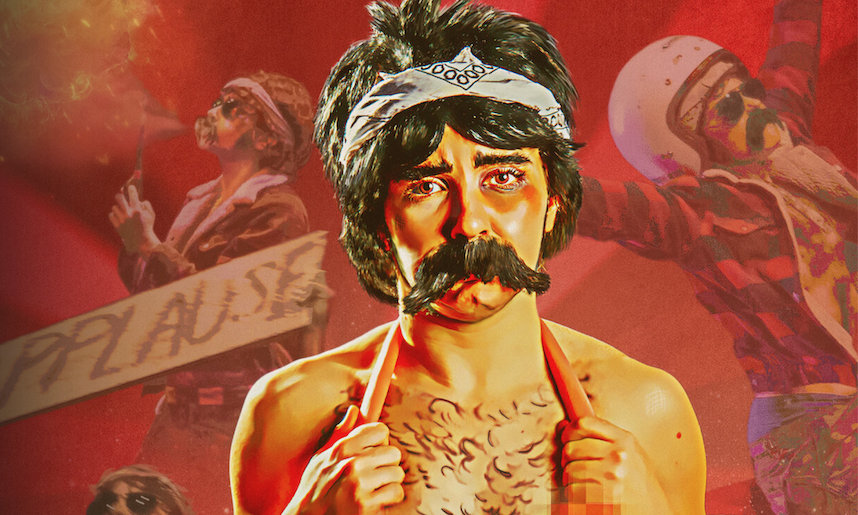 The comedy show that has been pegged as “the most astonishing special of 2020” has only been streaming on Netflix since Tuesday, but I’m already annoyed that my insane work week has prevented me from watching it yet. Nate is a one-man show in which the titular character is a macho man in crisis played by comedian/actress Natalie Palamides, and it sounds extraordinary. Produced by none other than Amy Poehler and performed in front of a live audience, this funny and thought-provoking examination of modern masculinity might just cancel out the 6 hours you might have wasted binging The Undoing (ugh). 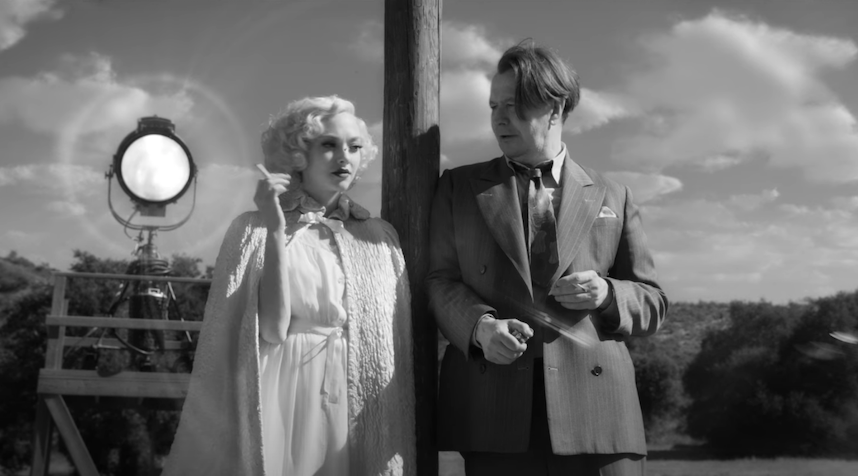 David Fincher’s latest feature, which is being hailed by critics as his best movie since The Social Network, is being released on Netflix today, December 4, and it’s one of the most highly anticipated films of the year. Mank is based on a decades-old script by Fincher’s father, and it explores the life of Herman J. Mankiewicz, the troubled, self-destructive Hollywood character who wrote Citizen Kane, played by Gary Oldman. Oldman is receiving a lot of praise for his performance, as is co-star Amanda Seyfried, who plays his mistress, and Tom Burke, who is apparently very impressive as Orson Welles.

The awesome, inspiring women behind Black Futures, a new volume celebrating the work of Black artists, photographers, writers, chefs, poets, and other creators, are celebrating the book launch with a special virtual event sponsored by BAM and Greenlight Books on December 7. Writer, curator, and activist Kimberly Drew and New York Times Magazine culture writer Jenna Wortham will be joined by activist Raquel Willis and artist Naima Green to discuss the collection and what it means to be Black and alive right now. Tickets are available here, with the option to add on your own copy of Black Futures, and in addition to supporting BAM, Greenlight Bookstore, and Black creators, you will also be contributing to the Campaign Against Hunger, which will receive a portion of the proceeds.

Credit: Museum of Food and Drink

If you’ve never celebrated Hanukkah with an artisanal sufganiyot, or strawberry jelly doughnut, before, 2020 feels like the year to go for it. On December 9 at 7pm, join Fany Gerson, the founder of La Neworkina and much-hyped Bed-Stuy newcomer Fan-Fan Doughnuts, for a live-streamed event produced by the Museum of Food and Drink that will include a strawberry jelly doughnut cooking lesson by Gerson, who was raised in Mexico City by Ashkenazi Jewish parents. Recipes and ingredient lists will be sent to ticket holders in advance, so you can follow along at home in real time. You’ll also have the option to add a signed copy of Gerson’s cookbook, My Sweet Mexico, to your purchase. Sounds like the perfect mid-week, mid-lockdown, mid-holiday season evening to me! 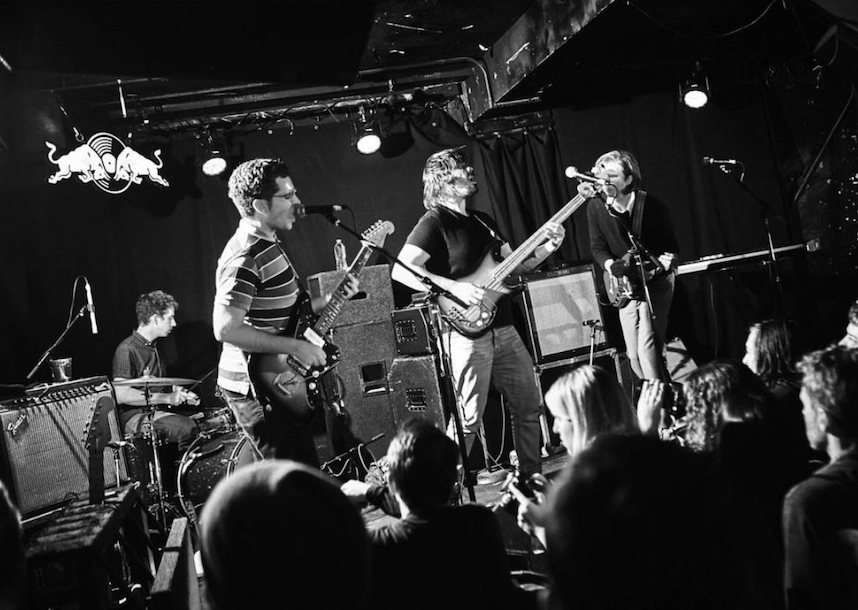 December 10 marks a decade since the seminal NYC-based Parquet Courts’ first concert, and they are commemorating the anniversary with a show that will be broadcast live from Pioneer Works. In the band’s own words, “Ten years ago our adventure began by playing our first show to virtually no one, and to celebrate we’ve decided to play a show to everyone, virtually.” Tickets to On Time, which are just $15, include access to the concert livestream, new interviews, archival footage, and merch exclusively available to ticket holders. 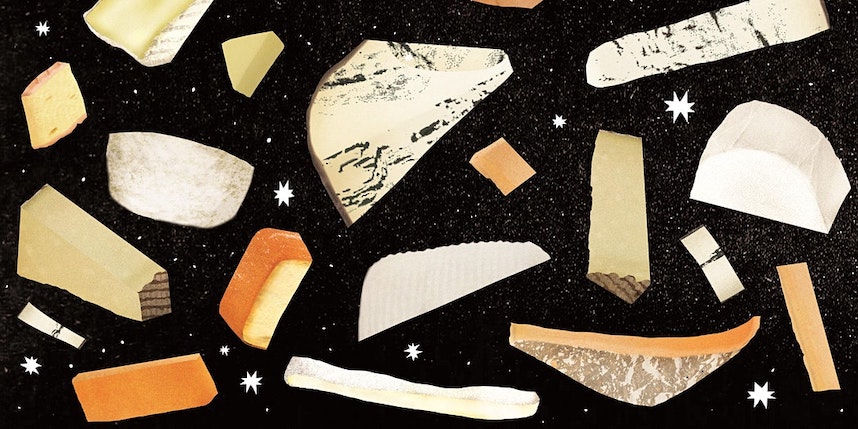 OK, so this is not the year for holiday parties featuring piles of shrimp cocktail and massive cheese platters to be cheerfully picked at all night over glasses of wine and fun conversation, and that’s a fact that I’m personally still getting right with. I’m thinking that this New Rules of Cheese Party, a virtual event hosted by Anne Saxelby of Saxelby Cheesmongers on December 16, will be a good stand in for some of the fun— and delicious cheese—that we are collectively missing out on this year. Your ticket includes a copy The New Rules of Cheese: A Freewheeling and Informative Guide, Saxelby’s new book that teaches you how to properly select, store, and taste cheese and to create a cheese platter that will be sure to wow everyone when things go back to normal. Apparently there is even a section about why cheese is actually good for you, so maybe there IS some good news in 2020!

7. Pop-Up Magazine Issue in a Box 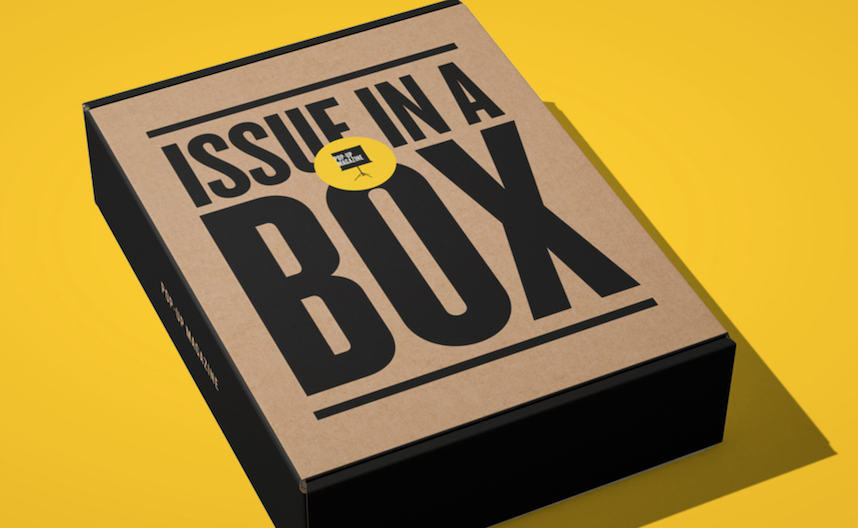 Regular readers of our culture roundups may remember that we were big fans of Pop-Up Magazine, which adapted the experience of reading a well-curated magazine to a live, multi-discipline stage performance at BAM and elsewhere throughout the country one a few special nights a year. Obviously, crowding into the Howard Gilman Opera House for an evening of stories, short films, and musical performances, is not an option these days, but the innovative peeps behind Pop-Up Magazine have come up with a new, pandemic-appropriate storytelling experience, the Issue In A Box, that is debuting this month. The first edition, which is available for purchase now, is food-focused and includes stories, images, audio clips, objects, and edible treats from contributors like chef Samin Nosrat, novelist Karen Russell, and artists Jason Fulford and Tamara Shopsin, just to name a few. Order now, for yourself or for that person on your list who loves food and a well-told story, and give the gift of a unique, creative, and stimulating night in—who couldn’t use that right now? 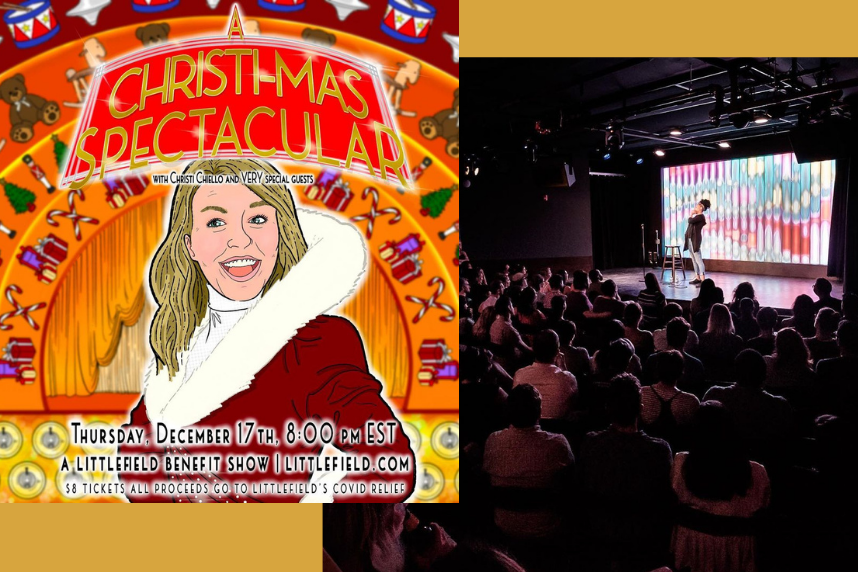 Littlefield has served as the homefield venue for a litany of high-profile Brooklyn-based comics for over a decade, some of whom are taking the opportunity to repay the Gowanus theater and its staff by throwing a Covid relief fundraiser on December 17 at 8pm. Christi Chiello will host A Christi-mas Spectacular, a live-streamed night of laughter with names like Jo Firestone, Chris Gethard, Matteo Lane, and Brittany Carney already signed on, and surprise guests expected. All ticket proceeds go directly to Littlefield, which was forced to close temporarily in the spring because of the pandemic.

Joe’s Pub, another essential New York performing arts institution that is currently closed to the public because of the pandemic, remains committed to supporting artists during this devastating time by sponsoring free live-streamed events every week through it’s Joe’s Pub Live! series. Starting on December 17, the beloved Joe McGinty and The Loser’s Lounge is back with a multi-episode YouTube series called The Battle of the One Hit Wonders, which will allow audience members to vote—battle-of-the-bands style—for their favorite one-hit wonders from the past six decades. The event is free and will run monthly or bi-monthly from now through March. 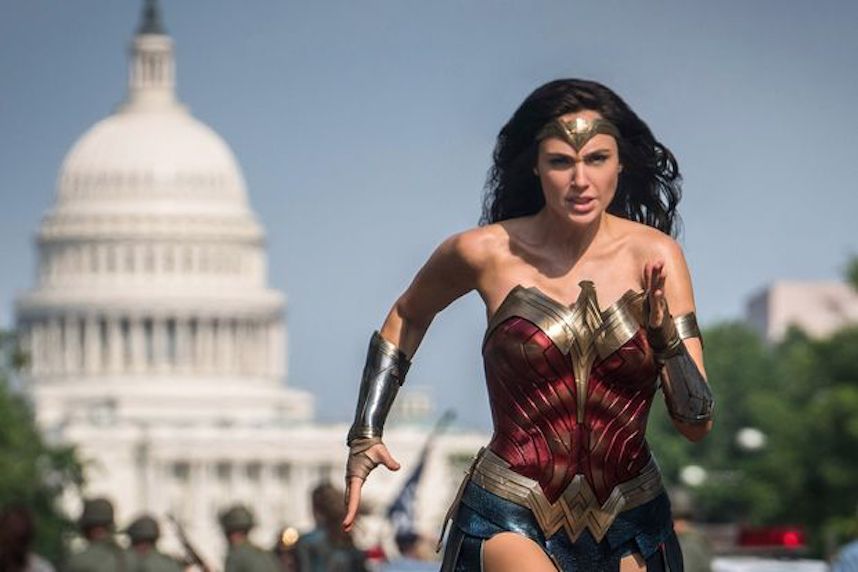 What’s the best way to spend the Christmas Day at the end of the worst year in modern memory? Escapist big-budget superhero cinema sounds like just the ticket, and as luck would have it, the hotly-anticipated sequel to Patty Jenkins’ 2017 Wonder Woman drops on December 25. Wonder Woman 1984 sees the return of Gal Gadot in the titular role, and she’s joined by a star-studded cast including Robin Wright, Chris Pine, Kristen Wiig, and Pedro Pascal. Unfortunately, you’ll need to figure out how to access the absurdly elusive HBO Max in order to see it (this is a workaround for some Roku users) but that’s the only thing keeping you from extravagant, Hollywood studio action and special effects during the final week of this blasted year from hell.