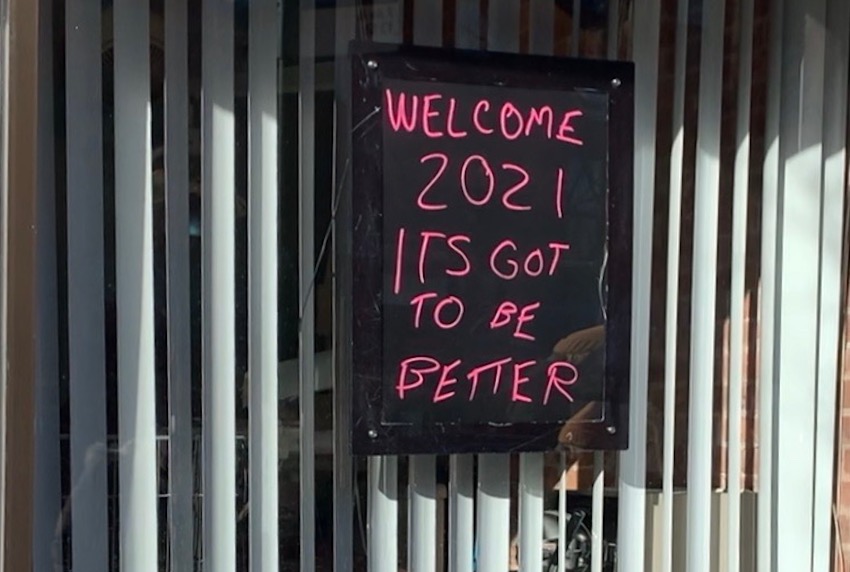 Spotted along a line for a Covid test. Photo: @mortalcitypodcast

Say what you will about 2020, and god knows we’ve all been doing just that all year, but you kind of have to admire its steadfast commitment to being the absolute worst, right up until the end, when Donald Trump was apparently voted the nation’s most admired man. Yepper. Normal, normal stuff from a totally normal population of people with awesome priorities and a healthy understanding of democracy, the Constitution, and how to recognize when they are being grifted every day right under their noses. Anyway, enough is enough is enough with this year of feeling fat, scared, depressed, bored and/or drunk at all times, and let’s hope that the vaccine rollout ramps up and we can at least look forward to seeing new people and maybe even travel (!) or in-person cultural events or having a damn drink in a bar in 2021.

In the meantime, we gotta get through New Year’s Eve, which is often a disappointing holiday in the best of times and feels like an extra bummer when you are forced to stay inside and contemplate the fact that any remaining shred of American exceptionalism has been laid to waste by the unfathomable levels of stupidity, selfishness, greed, and bigotry that have been on display this year. What is better to focus on, though, are the millions of people who have refused to succumb to these detestable forces, even in crisis, and have instead been doing what they can to care for and support others, whether that means taking to the streets to protest police violence, donating to food banks, canceling holiday travel, or simply wearing masks and socially distancing. If it hadn’t been for those folks, we’d really be finished, so I will raise my glass to all the good eggs out there this NYE, and toast to their continued kindness and empathy as we claw our way out of this mess.

Speaking of supporting neighbors, our local Brooklyn restaurants need a lot of help right now, so please consider including one of them in your NYE celebration, whatever form that takes. By way of example, Parklife is hosting an in-person party in its outdoor space; Olmsted is offering takeout caviar and accouterments for the eve itself or mimosas to pick up the next day; and this great Family Meal cookbook contains 38 recipes that you can make at home from chefs at Roberta’s, Roman’s, Win Son, Pies ‘N’ Thighs, and many other Brooklyn institutions, with proceeds benefitting the NYC restaurant employee relief fund. If you’re interested in an even more meaningful commitment, you might think about signing up for the Summer Long Supper Club, which includes one three-course dinner per week for 16 weeks from some of the borough’s best eateries, like M. Wells, Meadowsweet, La Vara, Llama Inn, and Glasserie. Now that I finally understand why I haven’t been able to buy bucatini anywhere, I have given up on my dreams of recreating the perfect all’amatriciana dish I had in Italy a few years back for the time being, so I’m thinking this supper club sounds like a pretty good plan.

Otherwise, I’ve been working hard this week, grateful to still have a job but feeling overwhelmed and over-Zoomed. In the few moments of free time I’ve had, I loved watching First Cow, a slow-paced but really gorgeous movie about friendship that I recommend if your attention span is cooperating with you these days, and I imagine that my ability to resist Bridgerton any longer will be no match for having the day off and nothing to do on Friday. Otherwise, I’m listening to a ton of WNYC, eating insane amounts of chocolate, and checking in on just enough social media to see that the people I know who work in healthcare are getting their vaccines (hallelujah!). It certainly doesn’t seem like January is going to be a lot of fun, but there are enough reasons to believe that 2021 is going to be a much better year than what we’ve just survived to actually CELEBRATE the arrival of a new calendar year, and that’s something in and of itself! Have a safe and healthy New Year from all of us at Brooklyn Based, thanks for sticking with us, and we can’t wait to get back to some semblance of our regularly scheduled programming sometime in 2021!