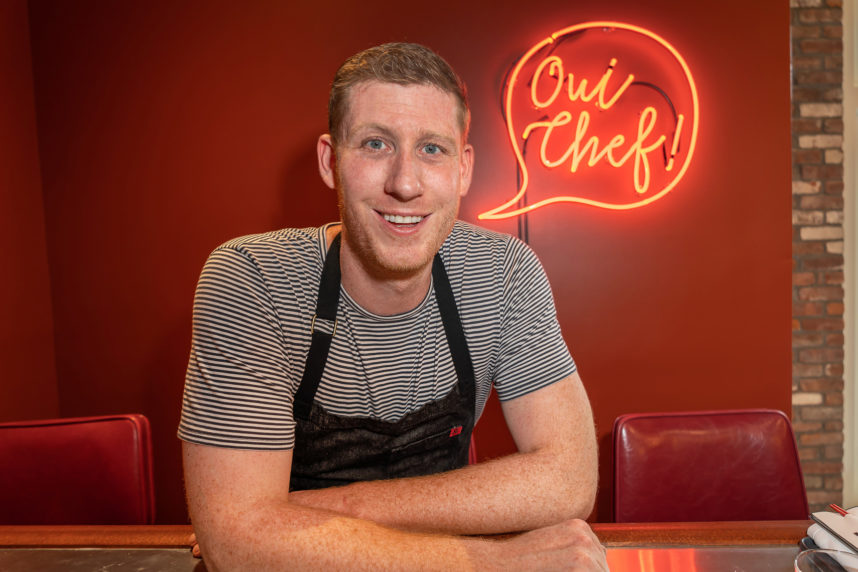 What happens when one of Brooklyn’s hottest restaurants undergoes a baptism by fire? Greg Baxtrom, chef-owner of Olmsted in Prospect Heights, has been hustling since the moment the pandemic hit.

A former Eagle Scout who has worked at Per Se, Alinea, and Blue Hill at Stone Barns, (plus Wendy’s when he was a teenager), and was a personal chef for Jerry and Jessica Seinfeld, Baxtrom sees the power of food from many angles. He’s known for making elegant, inventive fare at accessible prices, and when he had to close up shop in the spring, he was quick to feed people for free.

He talks about his community work with humility and pragmatism, but openly enthuses about new dishes at the soon-to-reopen Maison Yaki, including a umami-bomb (or perhaps we should say umami-balm) of a burger, topped with crispy shallots and black soy hollandaise.

Here’s our conversation with Baxtrom about cooking with purpose.

When things got really dark, really fast back in March, my kids were so scared and I used that Mr. Rogers line that you have to “look for the helpers.” And as an example of someone who was helping, I told them that’s there’s a restaurant here in Brooklyn called Olmsted, and the chef turned it into a food bank. And he’s serving people. And it was so inspiring for us.

Oh, thank you for saying that. I was just trying to stay busy.

It’s more than that, though. And you did it quickly, too!

Within a week! We were shut down on a Monday, and before the next Monday we were doing it. A friend of mine, Eduardo Jordan, is a well-known chef in Seattle, and I saw him posting a video that he was turning [his restaurant Salare] into a food bank. So I called him and he told me about the initiative. Within a couple of hours of the phone call we were set up to do it ourselves.

And how long did the food bank last for? Is that still happening?

Now, we do meals for World Central Kitchen and another organization called Rethink. And those meals get delivered, so people don’t come to the restaurant for them. When we first started doing the food bank out of Olmsted, we were doing it seven days a week. We wanted to be a constant in the neighborhood. Over time, as we became a little bit more comfortable, we were trying to find ways to justify bringing back employees. The workers at the food bank were all volunteers, and a lot of them were our cooks. That led us into doing this Trading Post concept, which is like a bakery or a store.

Olmsted has two storefronts. When we were about two years old, we, we expanded into the dry cleaner that was next door to us. The main dining room door was a food pantry and the door on the right was this gourmet grocery store [called the Trading Post]. So, our bakery was baking baguettes for the food bank and giving us their extra breads and stuff that didn’t sell.

So, on one side, we were selling our expensive $7 baguettes. And then on the left side, it was a free baguette. So it was strange, strange times for sure. But it allowed us to bring back more cooks and bring back some front of the house staff.

It almost feels like a mutual aid setup. People who could afford the $7 baguette were buying them because they wanted to support the food bank.

So what is this year been like for you? Are you exhausted?

It’s a shitshow! It was the year of pivots. You know, it’s always a struggle. I don’t just cook to cook. I want to do something meaningful. I want people to like my food, but I don’t want to just be a once-a-year fine dining experience, I want to be a little bit more accessible than that and reach more people and have more people see what I’m working on. And I don’t want that to just be a really good chocolate mousse. I would like to have some purpose.

When all this stuff went down, we had to lay everyone off. And our cooks are dedicated. They like to work. So while they were collecting their unemployment, they were volunteering at the food bank. A lot of my chef colleagues and restaurateur colleagues took on really important work, like navigating politics. That’s not my strength, but physically cooking is something I could do. Growing up being an Eagle Scout, it was sort of a no-brainer to flip the restaurant into a food bank. I still had the food. It was still there. Might as well let people eat and get another meal out of it.

Do you have anything you wish that politicians—Cuomo and de Blasio—would have done differently?

Of course, there are grievances. I mean, everyone is just trying to survive. We struggled with he constantly fluctuating guidelines, the rules about the structures that we were allowed to build on the streets. I probably spent more than $50,000 between two little restaurants in Brooklyn, just to keep rain off people. That’s a lot of money, and it was a lot of work to organize it. But, now they’re saying that maybe they’ll let us use them for a couple of years as a way to recoup some of our losses. 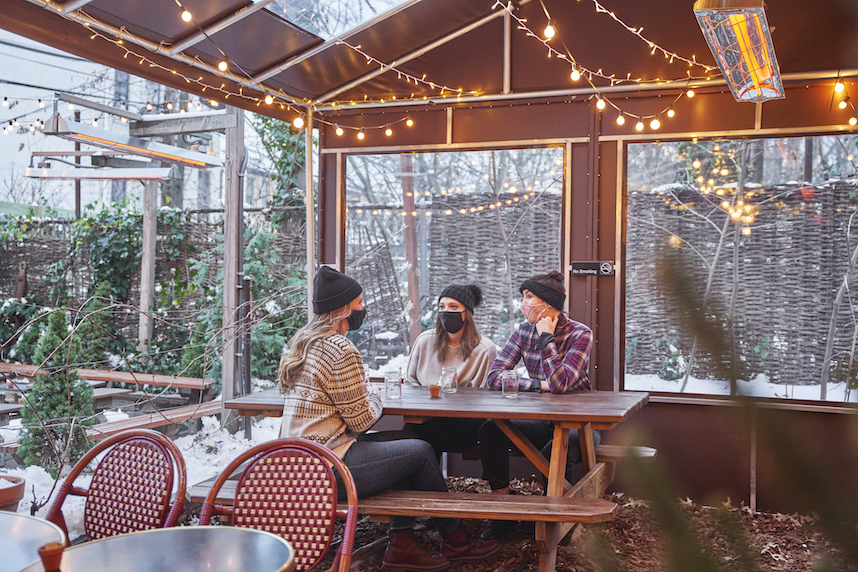 So you currently have seating out front and in the back, right?

Yeah, we’re really lucky at Olmsted. Like I said, we have the two storefronts, but we also have the two gardens out back, and we have two restaurants’ worth in front. So, we were able to have a substantial amount of seating, which really helped us during all this. However, if it’s slightly uncomfortable outside, temperature-wise, then you can just assume that on that day, you paid for your whole staff to come in, get ready, and then close. So, you know, that’s thousands of dollars that are going down the drain. [The outdoor seating] just doesn’t save us by any stretch of the imagination.

We had 60-something, employees, but our other restaurant, Maison Yaki, across the street, is still closed. We had to close it because of COVID before it even had its first birthday. And we struggled when we tried to have guests in the space when we were doing this Black entrepreneur series. No one knew that you could go in the back and sit down. Just because you post something on Instagram, even if you’re well known, it doesn’t mean that everyone just knows everything about your business and how to save it

So are you worried about the survival of smaller, lesser-known restaurants?

Yeah, I am! I’m worried about the Thai place I order from all the time, Plant Love House. They just have a small, family-owned restaurant. I have some goofy recipes that people like, so it gives me a little bit of clout. And I’ll take it, if it’s gonna save the business. But, the Thai place I order from? They’re just good people. When we were all forced to close, they were among the first people to show up. They loaded up their car and drove everything from their walk-in over to the food bank. They do delivery, and they do it well, so hopefully they’re doing okay.

When you order delivery, do you use a delivery service or call the restaurant? What’s the best way to order so that the restaurant gets the most out of it?

If my friend owns the restaurant and he yells at me for using like Seamless or something, I don’t use Seamless again. When you call them and give them a credit card, they get to save their 15 to 18 percent.

Yeah, I think a lot of people aren’t sure if it’s annoying to the restaurant to call or it’s helpful because they’re getting paid a little bit more.

No, it’s definitely worth it. You know, I don’t know anything about delivery. I haven’t worked takeout since I worked at Wendy’s when I was 16, and I crushed my job working at Wendy’s when I was a teenager, but you know, even with all the pivoting—the Black Entrepreneurs thing, the grocery store, the food bank, World Central Kitchen, the hot dog pop-up, the summer camp—that’s just me trying to survive. Thank god I have a couple of good ideas, but I am not good at executing an amazing delivery-only business. Others can do it better than me. And for the life of me, I still cannot figure out how to deliver french fries that are not soggy. The bane of my existence. 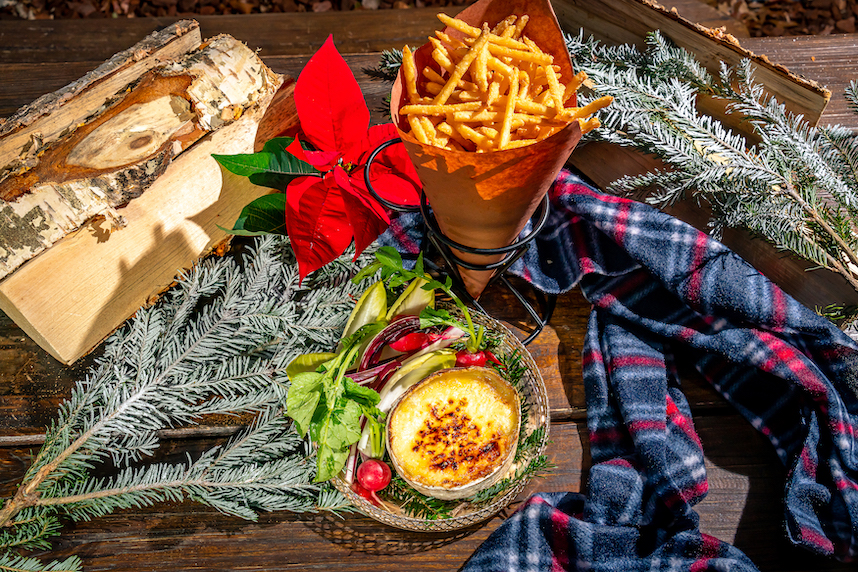 Yeah, french fries don’t really travel well. So, will you keep the Trading Post and the Cozy Cottage going? Is that the plan for the next few months?

Definitely. For me and a lot of my chef friends, we’re just trying to survive until April. At least then the vaccine will have been rolling out for a little while. Just get us to when nice weather is going to be on the horizon. We will have our outdoor dining, morale will be up, and comfort-ability will start going up.

So will you be keeping your comfort foods at least through April?

Is there anything you’d like to share about what’s going on with Olmsted after your holiday break?

We’re gonna be tweaking some stuff there, but the thing that really has my attention right now is that we’re finally going to reopen Maison Yaki, our restaurant across the street. It’s been closed since last March. We operated as pop-ups and stuff, but I really liked that restaurant. I mean, I’m sure everyone likes their own restaurant, but like, I thought it was really cool. I’m excited for people to see it again. We’re gonna make it 10% less cheffy, even though it’s like my child, I think it was perfect before. But since he’s not actually a child and he’s a restaurant, I’m gonna tweak him a little bit. I won’t make it more fast-foodie, but restaurants have to survive Instagram now, so it’ll be a little more food porn-y, a little more poured melted brie sauce and crispy rillette.

Are there any new dishes at Maison Yaki that you want to talk about?

Yeah, we’re going to do a fried chicken sandwich, using a technique that at Per Se we would call “super-crunch.” It’s such a great technique. Instead of dipping the chicken into eggs as a batter, you just dip it into this egg white and cornstarch mixture and then into breadcrumbs or panko. And it’s so, so crispy that after you fry it, you could put it in the fridge and eat it the next day, and it’ll still be nice and crispy. And then, I’m still trying to find a cool name for it, but we’re also going to do a burger with a black soy sauce hollandaise, nicely dressed bok choy, and crispy shallots. So it’s very umami.

That sounds amazing. Anything else?

We had a late-night menu, and we’re going to bring some of those things to the dinner menu. Like, instead of onion rings, we cut onions into little pieces, and then we tempura-fry them, instead of using beer batter. They’re a little nicer, a little less greasy. They’re like tempura onion rings, with a spicy French mayonnaise on top.

And will that be outdoor dining, take-out and delivery?

Yep, I’m gonna find a way to get french fries to stay crispy through delivery. That’s my challenge now.