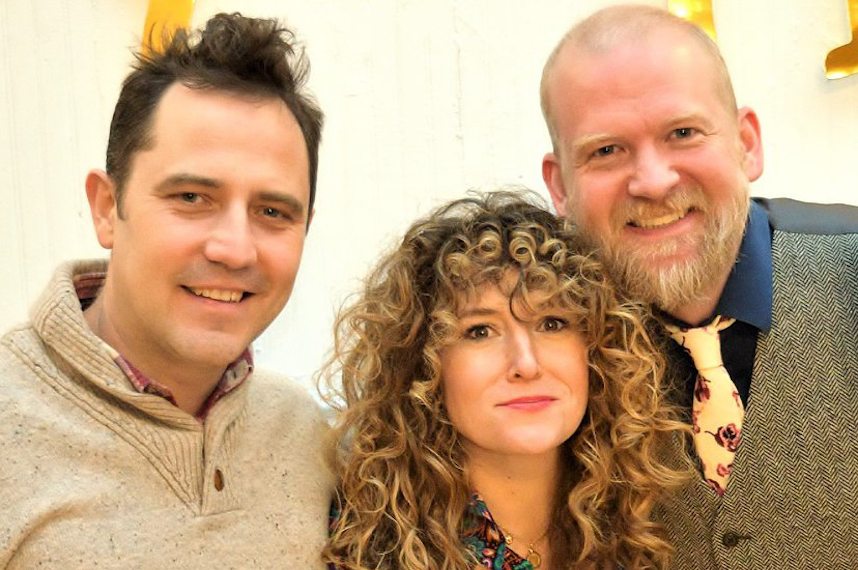 This is the first in a series of conversations with performing artists about what comes after Covid.

At the beginning of 2020, The Debate Society was gearing up for a new play, The Care and Feeding of Adults, and planning their annual fundraiser. After multiple postponements, the Brooklyn-based ensemble theater company had to cancel both.

For collaborators Hannah Bos (writer/performer), Paul Thureen (writer/performer) and Oliver Butler (director/developer), The Debate Society had always been flexible, expanding or contracting depending on the other projects they were working on, and what stage of development their plays were in. Pivoting is a strong part of their skillset. Still, a pandemic is a challenge for even the most nimble and creative people, and The Debate Society had to make some hard decisions to stay afloat, including not taking salaries and forgoing a storage space.

A year into the pandemic we talked to Bos, Butler, and Thureen about what it’s like to manage a theater company during Covid, how the government should prioritize helping the arts, pandemic parenting, applying for PPP loans as a small creative business, and what it might feel like to perform again.

Paul Thureen: We were working on self-producing our play, The Care and Feeding of Adults. We did a reading in January. We have one annual fundraiser that was scheduled for April. When Covid started, everyone had these calls back and forth, deciding if we should cancel our fundraiser or not, and how that would work. Every week felt like a year. And every week so much changed. And every week we would say, “Well, next week we will decide this.” By the time we got to that next week, that wasn’t even the question anymore.

How do you feel about the federal and New York State government plans to help the theater and wider arts communities recover? What do you wish they were doing?

OB: Our value in the community is undervalued. When you have someone like Cuomo, for example, I get concerned that he doesn’t prioritize all arts workers. You hear about big opportunities like Bringing Broadway Back, which, sure, use celebrities to get people going [to the theater]. But I don’t think that a lot of people at the top recognize all the little people, all the smaller players, and how much money they actually bring into the system.

We’re trying to get Biden to have an arts and culture cabinet secretary. We should have that, not just because it’s the right thing to do and I want to be represented, but because the arts and culture are going to be what helps us get back to normal. That is going to be what helps people feel comfortable around each other again. And it will be the test of whether or not we have returned or not.

How has the larger theater community come together, during this time? Have people been helping each other?

OB: I feel a lot of empathy, sympathy, and support from the community. But one of the problems with Covid is you don’t see sick people everywhere. I haven’t seen a sick person. I know of sick people. I know people who have gotten very sick. I know it exists, but I don’t spend my day to day seeing sick people everywhere. When you look at the pain that people are experiencing, when someone doesn’t have enough money for food or doesn’t have enough money for rent, they don’t tend to advertise it like, I’m leaving because I’ve run out of cash.

There is a lack of conversation. I don’t know how to start the conversation because you can’t just reach out to people and say, “Hey, did you eat?”

Theater is only theater because it’s theater. It’s the most dangerous thing ever right now. We were already weird. We spend our lives making something where people come and pay to be in the same room with people who pretend to be other people.

Yeah. I think I also keep going back and forth between thinking I will either be hungry for it, like crazy enthusiastic, or so scared.

OB: I do think the come-back will be awesome. I don’t know how long it will take, and I’m sure again we’ll have to deal with pain that will be revealed to us. I do feel a deep love of our company, our community. I want to eat a shady cheese tray at an opening. I want to go out for nachos at the bar after a show. I want to be there at preview and look around and see generations, decades of people I’ve worked with at other places. I want to do all of that again in such a bad way, that I feel like once we are allowed to, it will be massive.

I don’t know that it will be healthy. There’s a lot of energy, and since theater is about energy and spaces, people are going to show up and stuff is going to happen. And I hope it’s good, you know?

The Debate Society on Vimeo.

In terms of both the Debate Society and your individual work, how have your creative processes changed in the last year?

HB: Well, I am a mom. And the pandemic has been really challenging, with the child, without child care. It’s been absolutely bonkers, and having to try to work during naps, which are fading, handing my son back and forth with my husband. And balancing that has been extremely challenging.

I used to be in an affordable daycare on my block; boy, do I miss that option! Creatively, I am lucky because besides The Debate Society, I also have been working with Paul on television for the last couple of years, writing. And so I have had work. But it’s just really hard to work with a kid during the pandemic, and also teaching, and still writing theater.

OB: The Debate Society was always, for me as a director, the place where I also got to be a creator. And Hannah, Paul and I, we have done some creative conversation. We haven’t really been developing. We are people who need to be together to create the kind of things that we do. We stay busy. But I have shifted to finding my way into my own solo creative practice, as far as writing and creating.

Tell me about the process of hibernating.

PT: So, it went from planning and production, to figuring out strategically how we could go into to hibernation, have no expenses, so when we can, we can emerge. It became figuring out, Can we survive this?

Hannah Bos: I don’t know anyone who’s ever experienced this kind of moment. But I’m grateful that we have been collapsing and expanding over the years. It has been part of what we could do; and we’ve kept things very, very small. Because we’re so small, I guess it’s been a lucky thing that we don’t have a space, and that we don’t have many other responsibilities.

Oliver Butler: I should clarify in the hibernation that we didn’t stop everything. We just cut; we had normally taken a shared monthly artistic director salary. Hannah, Paul and I put those down to zero, and then we moved our general manager to being compensated for a much smaller amount of work.

You got Paycheck Protection Program funding. What was the application process like?

OB: The first PPP loan, they were just sending the money through. And then we were able to set ourselves up to continue getting a salary, and cover our time and our general manager’s time for 12 weeks or something like that. Hannah, Paul and I, we wrote all the grants for the company for the first 10 years of our life before we ever first had a general manager.

This latest PPP,  it took a lot more time to get the answer. They sort of left us hanging for a bit. And I think the word on the street was there was actually a lot of fraud the first time around, or at least the accusations of fraud. So they were really double-checking on stuff.

PT: In the downtown theater arts community, there’s this culture of communication between different companies and organizations and artists, where it’s [asking each other] Wait, how does this work? How do you do this? There is this community where you figure it out together and rely on each other’s expertise.

What do you think of Zoom and other kinds of virtual theater?

PT: I think it’s great, anybody trying to do anything. And I think it’s a real challenge. I will say as just a person who spends all day in communicating with people on Zoom, it’s sometimes hard to engage in a production on Zoom. But that’s what we have right now.

HB: I, myself, have not participated in any, just because I miss theater so much. And I haven’t had time just because I’m so tired from being a mom and trying to work and trying to… just keep caught up. But I admire people who are making stuff now.

Have there been any bright spots, or anything that’s been a light in this time?

PT: We do a holiday party every year. And it’s just one of my favorite events of the year because anybody and everybody comes. And it’s supposed to be a dance party. And we weren’t sure what to do. So we did a Zoom party. Just to see your faces! And at the end then, we’re like, Let’s dance then! And we put on music. And then, everybody danced for one Mariah Carey song. And it was so fun.

HB: I got to dance with my mom, who I haven’t seen in a year. And she’s never been able to come to our holiday party. She’s 78, and was her first Zoom. It was really sweet.

OB: It was actually the most fun. It was the people we make stuff with. And then there’s people who we’ve gotten to know from them coming to our plays. We’ve gotten to know because they’ve supported us. Just being able to be there with them, and just seeing everybody dancing.

This interview has been condensed and edited for clarity.