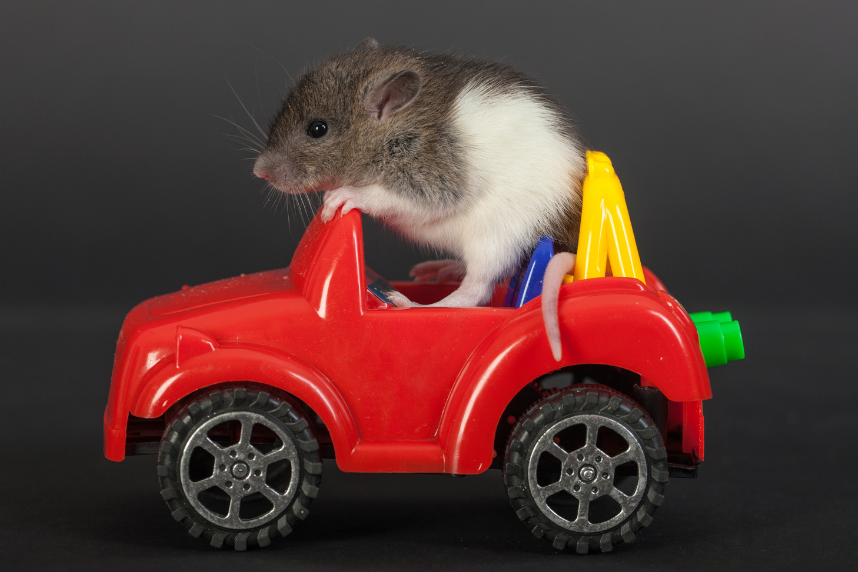 New York City is known for its highly competitive housing market, and no one understands that better than the rat population, which has discovered a cozy little neighborhood that is surprisingly affordable: Your car.

An engine compartment makes a perfect warm nest for rodents. As with any apartment with top-notch amenities in a crowded city, you can expect a steady stream of potential tenants. “[Rats] reproduce rapidly, they don’t live very long, so there’s always new rats in our city looking for a place to live,” says Matthew Combs, Postdoctoral Research Scientist at Columbia University. Especially now during winter, rats are taking up residence in vehicles more often than you might think. There’s probably one living under the hood of your car as you read this.

“I think it’s good to start by saying that rats are fairly simple creatures,” says Combs. “They need to drink water every day, they need to eat food and they need a place to live.”

Country rats will burrow in the ground, but in the city, they will often climb up into things for shelter. According to Combs, they are a very exploratory species and always looking for new opportunities. With cars, they’ve found the ultimate safe spaces away from predators, human interference, and the elements. “They really don’t need much space and they don’t want too much space when it comes to creating a nest because they can keep warm if it’s just sort of a small isolated space,” Combs says. Your car engine, with all those crevices and tiny nooks, is very attractive to rodents.

“We’ve found that during cold weather, the rat issue is particularly bad!” says Valerie Demicheva, a publicist at YourMechanic, a website offering mechanics that make house calls. (It’s like Uber, but for car repairs and tune-ups.) “Rats, mice, and cats alike seek refuge in long-term parked cars during the cold. They tend to take shelter during cold nights.”

The engine block holds heat, making it an enticing place in the winter. According to Keith Canete, a mechanic at a YourMechanic, mice and rats have front teeth that continually grow, so they are conditioned to gnaw, and the wires in the vehicle give the rodents something to chew on. “They like to chew on things like wires that look and perhaps feel like plant material,” says Combs. “Rats are used to chewing on stalks of grass for seeds and things like that, so they have an evolutionary instinct to gnaw on wires in search of food.” For city rats that don’t have access to nature, your car is the equivalent to an elusive garden apartment.

How will I know if a rat lives there?

The first hint that a rat has made a nest in your car is if you get hit with the smell of urine when you first start the engine. “Rats or mice actually leave a urine trail wherever they go,” Canete says. So when you start the vehicle up, you’ll have a strong urine smell.” If no amount of air freshener is solving your issue, you most likely have a nest. “The second thing that you would see: if they did compromise the wiring harness in the vehicle, you could have a check engine light on,” Canete says.

Rats chew on wires like fuel injector wires or ignition wires, which will misfire and turn the check engine light on. “Car owners should check for signs of fecal droppings, nests (leaves and twigs), and chewed up wires under the hood, especially if the car has been parked outside of a garage for over a week without driving,” says Demicheva.

Good advice, but who checks under their hood before moving their car? When it happened to me, I was clueless until I brought my car in for an oil change and the mechanic showed me remnants of bone, thread, and nest materials in the engine of the car. A friend upstate didn’t even need to open her hood, because the rat had actually gotten into the interior of the car and made a nest in the backseat.

“They can absolutely get into the cabin of the car,” says Combs. “Once they’re in the engine, they can find their way in. They have no trouble chewing through plastic or even things like aluminum, or softer metals.”

Canete says it’s especially common for pet owners who might have dog or cat food around in the car. “My guys have found clothing, pillow stuffing, whatever they use to nest and store their food.” So look for those remnants that they leave behind.

This particular rodent problem is not new, but anecdotal evidence suggests that it might be happening more during the pandemic. For one thing, many people bought cars as a way to avoid taking public transportation and practice social distancing. Additionally, cars are sitting in one place longer, because street cleaning was on pause for so long at the beginning of Covid. Now, with all of the snow we’ve had this winter, parked vehicles are sitting ducks for chilly rats. “Normally [people] drive their vehicles on a normal basis and they’re not sitting, so they have a tendency to scare the rodents off,” Canete says.

Is housing a rat in your car dangerous?

“Emphatically, yes,” says Combs. “Anytime you’re sharing space with a wild rat you’re at risk for a whole host of bacterial and viral pathogens. Some of these, like hantavirus, are kicked up into the air, aerosolize from the feces and rats poop everywhere they go. So, you could catch it just by being in the same space, or if you come in contact with the feces or urine, or God forbid, get bitten by a rat. But anytime you’re overlapping in space and time with a rat you’re at risk.” Ew.

What kind of damage can be done to my car?

“On average, the rodent repair generally averages from $500 to $1000 of repair, but I’ve had vehicles that had electrical harnesses damaged, and they run into the $4000 to $10,000 range,” Canete says. He adds that it’s considered a non-collision, but if you have comprehensive insurance, that might cover the costs of the repairs.

How in holy hell can I prevent this from happening?

There are steps car owners can take to try to prevent rats from burrowing into their cars. According to Canete, you could attach a device under your hood that emits a high-pitched noise that humans can’t hear and a strobe light. Or you could use a rodent repellent spray. Also, you could try not to park over subway grates and places where there are tons of rats, but that, unfortunately, is most of the city. You could also look for signs of holes in the building foundation or garbage cans before parking the car.

Implementing all of these steps may not be enough to stop the rodents from getting in. “There’s really no magic bullet when it comes to rats,” says Combs. “Unfortunately, the best solution is constant vigilance really, which means regularly using your car or turning it or just checking the engine compartment.”

Instead of celebrating the cancellation of street cleaning, use that as an opportunity to go for a Sunday drive. “Rats are opportunists. They’re going to take advantage of the opportunity at every given time,” says Canete. “So you’ve just got to keep an eye on it.” Think of this as your own opportunity—to actually use your car. Day trip, anyone?