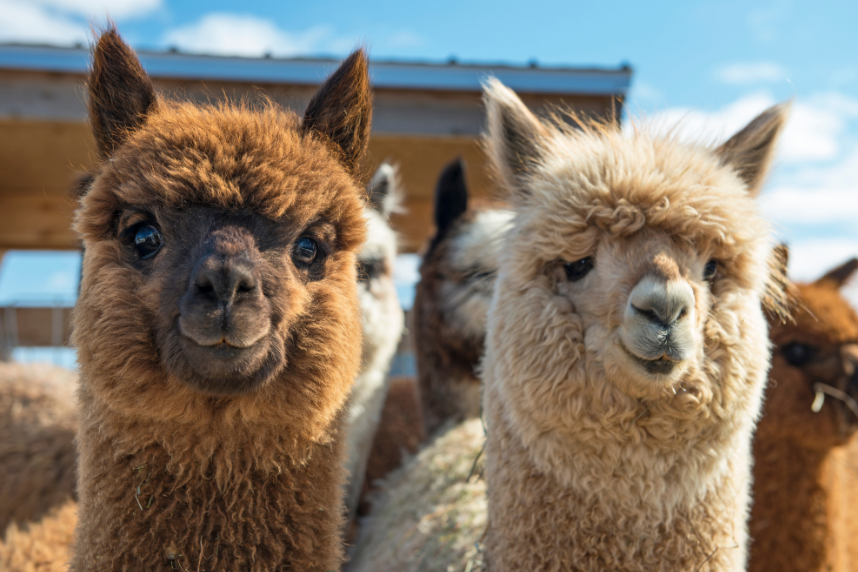 We all deserve some alpacas.

Balmy, beautiful weather! Gaining an extra hour of sunlight! An announcement that everyone who wants a vaccine will be able to get one starting May 1! I’m so excited about all of it I can hardly stand it, and fantasy vacation planning is taking up way too much of my time this week.

It’s an odd juxtaposition of giddy anticipation set against the grim anniversary of the day shit suddenly got really scary last March. For me, it was on this very day a year ago that my office announced it was shutting down “temporarily” and I frantically threw a few things in a bag and drove up to my mom’s house in Rockland County, terrified that the city was on the brink of an I Am Legend style total shutdown and I’d be unable to see her or my sister for months. Recently, to celebrate my sister’s birthday, my mom made a photobook that documents the many months that we spent living together in my childhood home playing out a bizarre routine that involved dutifully disinfecting groceries, visiting our neighbors’ alpacas, arguing about how much MSNBC watching is healthy or normal, talking about what we were going to eat for dinner all day every day, and—as the pictures can attest—cycling through a rotation of remarkably unflattering adult onesies and linen muumuus while showering infrequently and constantly cooking, doing dishes, or frowning into a screen of some sort.

So much has been lost this year, and while I’ve already got several weddings, funerals, and baby meetings scheduled for this fall, I wonder if it will ever be possible to catch up and adequately process the many momentous events that happened in this strange time vacuum we’ve collectively inhabited. What will the other side of this all look like? Clearly, it will be better to be able to see people and move around freely, but it’s hard to imagine how I will experience going back into work every day and leaving my dog (who has been my constant sidekick for the past 12 months) to be walked by a stranger, or seeing a movie in a movie theater, or getting on a plane, or meeting a friend in a crowded bar and stumbling home in the wee hours.

Thanks to the pandemic, I’m now the owner of a reliable, trustworthy car that allows me to escape the city a lot more than I used to, and that is one new development that I hope will continue to flourish in the after times, even if its only to avoid rats in my engine or to take a much-needed break from alternate side of the street parking gauntlet. Relatedly, I’ve been up in Maine visiting family this week and it’s been glorious, but I can’t wait to get back to Brooklyn and soak up some of the summery weather you all are posting about.

Before I left last weekend, I met one of my best friends for an outdoor lunch at Pasquale Jones in Soho, and then walked around that part of town for the first time in over a year, which felt odd but comforting. She insisted that I watch a psychological thriller called Behind Her Eyes, which stars Bono’s daughter Eve Hewson, which I promptly did and then had nightmares about. If you are looking for a thrill, I suggest binge-watching that or buying tickets to see The Shining tomorrow night at the newly reopened Queens Drive-In. Sunday is Pi Day, which means it is acceptable, nay expected, that you would eat some pie, and here’s a pretty interesting round up of unusual varieties from all around the world to get your wheels spinning. I recently made this savory broccoli and blue cheese affair from my new copy of Plenty, and it was a great lunch to spread out over the week.

Otherwise, I am looking forward to Wednesday’s premiere of Murf Meyer is Self-Medicated, a podcast about drug use and the harm reduction movement made by a talented and supremely funny friend of mine who has a lot of personal experience to draw from in this arena. The Xennial in me (yes, it’s a thing, don’t fight me) is semi-resigned to paying for Paramount + just so I can watch The Real World season one reunion, but I haven’t caved yet. I am also jazzed about the new Alexander Calder exhibit, some of which is outdoors, that opens at MoMA this weekend, as well as Thursday’s premiere of Romeo Y Julieta, a bilingual audio adaptation of Shakespeare’s best-known play starring Lupita Nyong’o and Juan Castro from WNYC and the Public Theatre.

On Monday night, the Brooklyn Museum is celebrating RBG’s birthday with a one-time virtual dramatic reading of some of the late justice’s most influential opinions and arguments, with proceeds from ticket sales to benefit the museum’s Feminist Art Fund. And on Thursday night, you can ring in the Persian New Year with a virtual cook-along hosted by chef Louisa Shafia and MOFAD.

It has now officially been a year since I have completed a book :(.  I did though, read and LOL along with this takedown of John Mayer and Daughters, his impossibly awful, steaming pile of a song from 2004, and I have this Harper’s piece by Ann Patchett cued up and ready to go for when I have a bit more time on my hands. Beyond that, I’m just pondering what comes next, and how we will react and adapt to all the changes coming. For now though, I think we all get to truly enjoy a beautiful spring weekend—go out there and get after it everyone!