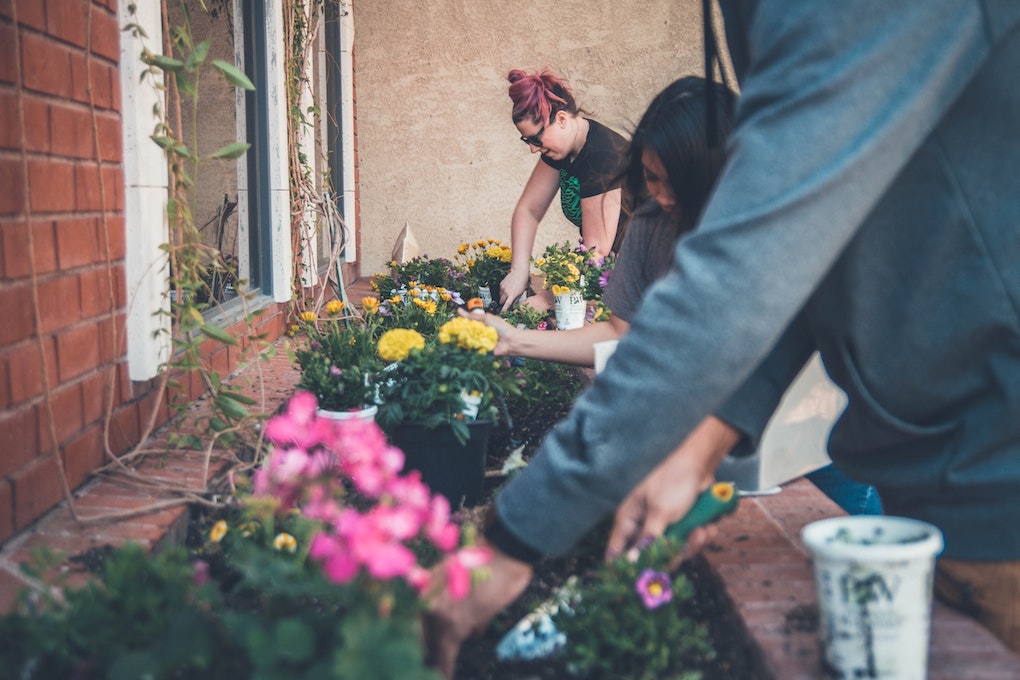 Can you smell that through your semi-congested sinuses? Spring has sprung. The blossoms? They are a bloomin. The leaves? They are unfurlin. And all over the place, people are plotting how to turn whatever bits of bare earth they have access to—be it a backyard or window box—into gardens.

Big or small, urban or otherwise, there are plenty of rewards to reap from getting your hands dirty this way. Not only do studies show that gardening is good for your mental and physical health. But if you decide to get in on the growing trend of planting a pollinator garden, you can also do Mother Earth a solid at the same time because the types of flora found in them, and the pollination process itself, helps to capture and contain significant stores of carbon dioxide, making them an integral part of addressing climate change, according to ecologists.

As its name implies, a pollinator garden is designed to attract the types of insects and animals that transfer pollen from male to female plants and flowers. “They’re responsible for the reproduction of 85 percent of our wild plants and basically over a third of our agricultural crops,” says Emily Fano, an organizer for NYC Pollinator Working Group, and senior education manager for the National Wildlife Federation in New York City. “They’re really, really important to our survival, and they don’t get enough attention.”

They also help produce $18 billion worth of commercial crops annually, according to the U.S. Department of Agriculture, which says that pollinator populations—this includes bees, yes, but also butterflies, moths, wasps, beetles, flies, birds, bats, and other small mammals—are at a critical crossroads. And ecologists agree; they’re concerned about the decline and extinction of many pollinator species due to multiple factors, from pesticide use to climate variability. Pollinator gardens, however, can help with conservation efforts in two crucial ways: They provide habitats and food.

Once you plant it, they will come

Findings from the first-ever study to look at how urban gardens impact pollinator populations were published in the Journal of Ecology earlier this year. Scientists found that, hands down, home gardens are the primary food source for pollinators—the nectar produced from as few as three residential gardens was enough to feed thousands of insects and animals. “We expected private gardens in towns and cities to be a plentiful source of nectar, but didn’t anticipate the scale of production would be to such an overwhelming extent,” said Nicholas Tew, an ecologist and lead author on the study, in a press release. “It is vital that new housing developments include gardens and also important for gardeners to try to make sure their gardens are as good as possible for pollinators.”

Good, in this sense, doesn’t have to mean big, offers Fano, who suggests starting small. (Great news for city residents who might not have a whole lot of real estate to work with.) “You can plant a pollinator garden anywhere basically,” she says. “If you have a window box, if you have a small planter, if you have a bigger patch of space, then great.”

No matter the size, the key is to introduce plants and flowers into your garden that are indigenous to the area. “We really have to reorient the way that we think about planting gardens and really think about the importance of native plants, rather than kind of ornamental plants or non-native plants that folks might pick up at garden stores, because what you plant is really important,” Fano says.

“There are a lot of nurseries now that are including more and more native plants now that it’s really understood how important they are to an ecosystem, to support the native diversity that’s there.” Fano says. Here in NYC, she recommends sourcing your plants from three places in particular: Lowlands Nursery at the Gowanus Canal Conservancy, Crest Hardware & Urban Garden Center in Williamsburg, and Chelsea Garden Center, which has spots in Red Hook and Williamsburg.

The purpose of staying hyperlocal when it comes to what you plant in your pollinator garden is to help build back the biodiversity that originally existed where you live. “Once you plant native plants from a local area, you will start to see native fauna coming to those plants,” Fano says. This helps improve the overall health of an ecosystem, the effects of which are felt all the way up the food chain.

“People don’t often think about the benefits, in terms of the ecosystem benefits, that pollinators provide,” Fano says. “So knowing that a pollinator garden is planted with plants and flowers that can provide nectar, ideally throughout a growing season, for both local and migratory pollinators makes me feel really happy.”

This is especially beneficial here in New York, where local plant and wildlife ecosystems are still bouncing back post-Hurricane Sandy. “It really just wrecked all of the biodiversity and the plants at the Gateway National Recreation Area, Jamaica Bay Wildlife Refuge, and some of the other park areas,” says Fano, who was working with the National Park Service at the time. “They happened to have a study showing that bee populations in the national park had declined, and that the number of bees that they were seeing was really low.”

It was around this time that she started getting more into pollinator education and conservation efforts here in the city, eventually helping to establish the NYC Pollinator Working Group in 2017, in which interest really blossomed over the years. “I wouldn’t call us a nerdy community, but we are definitely people who care about plants and insects,” she says. “Getting together and talking about plants and insects is kind of a funny thing when you think about it, but we’re all really passionate about it because we know that pollinators are critical to our own survival.”

A big part of their mission is to spread the word (fitting for a group dedicated to pollination) about the importance of pollinator gardens and share the best practices for building your own.

Every pollinator garden needs to provide a few things in order to be effective. “The main thing that we say when we tell people to create a garden for wildlife, is that it has to offer or provide four things, food, water, shelter, and places to raise young,” Fano says. “And then planting three species per season—looking at spring, summer, fall, and even winter to provide plants for any stray pollinators that might be around—to give some floral diversity for any pollinators that might come by. Witch hazel in the winter months would be something. For the fall, goldenrod is a pretty important staple. In spring, milkweed is a critical food source for the Monarch butterfly that are really endangered right now and in peril of disappearing.”

To figure out which flowers and plants are indigenous to your area, you can use this handy tool, the Native Plants Finder, which the National Wildlife Federation helped developed in collaboration with Doug Tallamy, Ph.D., a professor in the Department of Entomology and Wildlife Ecology at the University of Delaware, and author of Nature’s Best Hope: A New Approach to Conservation That Starts In Your Yard.

Other than being local varieties, what flowers and plants you choose should depend on the location of your garden. “So what you plant really should be determined by how much sun you have in a spot, whether you have shade,” Fano says, who notes that it can take a season or two for some varieties of plants and flowers to bloom from seeds. So if you want a pollinator garden pronto, your best bet is to start one with plugs (also known as seedlings or starts) you pick up from a local nursery.

And if being in charge of your own garden feels overwhelming, which is how I felt after one summer of community gardening, just know that there are also events, like this one hosted by the Newtown Creek Alliance, that allow you to help tend to pollinator gardens in public spaces around the city. But if you can manage to find the time and soil to start your own, it’ll likely yield such high returns on good vibes (with minimal maintenance) that you’ll be glad you did. “In addition to the beauty and kind of the restorative spaces that these gardens provide, they often can provide an aesthetically pleasing variety of flowers and plants that are also very beautiful to look at,” Fano says.