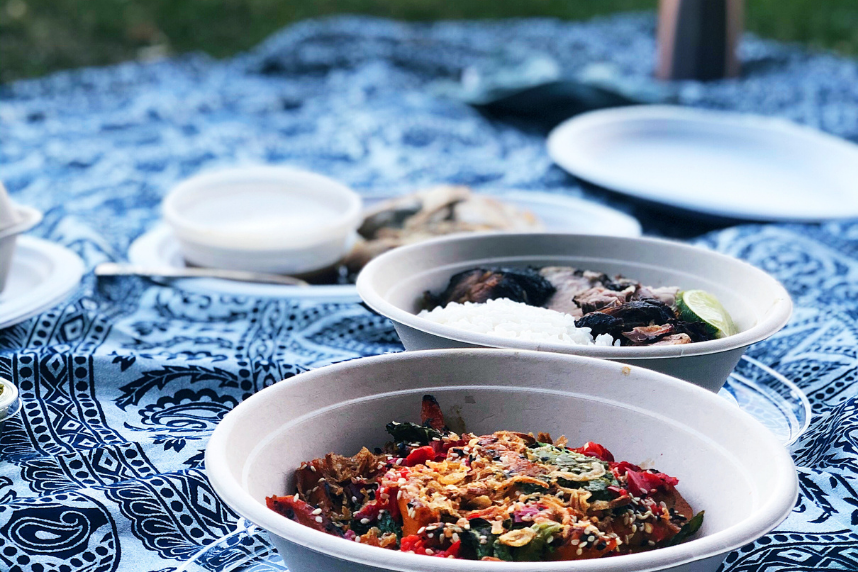 Brooklyn nailed it with outdoor dining this winter: the parklets, the igloos, and the heat lamps were all next-level. Then there were the restaurants that really went all out with wool blankets and actual outdoor fireplaces. Their valiant efforts made it possible to suspend reality long enough (typically 90 minutes, max) to make you forget you were essentially sitting in a New York City street gutter—which is a type of magic all its own.

But now that the warm weather has returned, should you find yourself craving a simpler dining experience, there’s nothing better than whiling away an afternoon lounging and munching in a park. And you know what makes picnicking in Brooklyn 100-percent better than anywhere else? You never have to lug a cooler and prepare a spread if you don’t want to—just stop by a park-adjacent restaurant for your provisions, and focus instead on securing the best picnic blanket and bickering with your friends over whether to claim space in the sun or the shade. (Pro tip: Split the difference by setting up camp semi under a tree so everybody wins.)

Of course, there’s no shortage of greenspaces in Kings County, each with its own assortment of local eateries nearby. So for this roundup, we’ve focused on four of our favorite parks—due largely to the amount of grassy real estate and convenience of picnic tables—and the places we frequent for picnic spreads in their proximities. 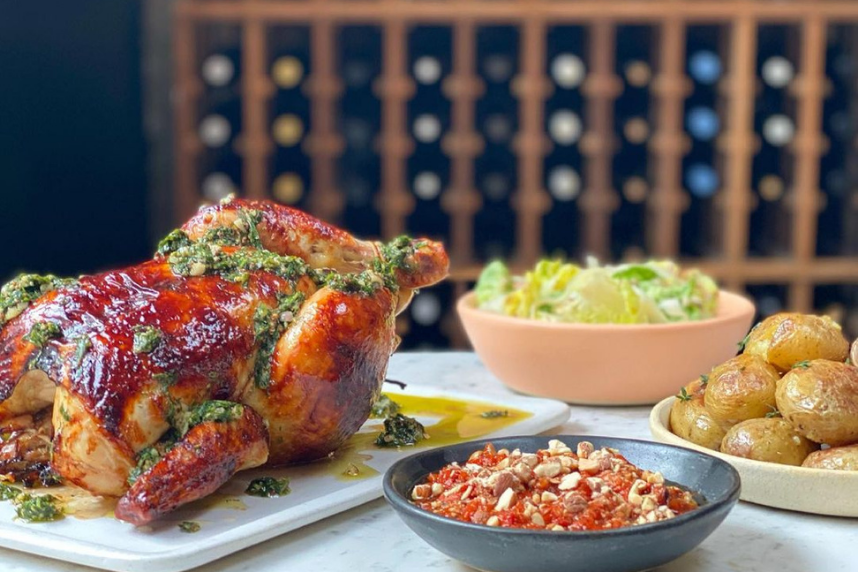 The biggest park in Brooklyn has an almost unlimited amount of perfect picnic places. But the 11th street entrance brings you close to the bandshell picnic tables, as well as lots of green grass on which to unfurl a blanket. Plus, just a few blocks away on 7th Avenue and 11th street is Winner, a great restaurant with fantastic to-go options.

At first glance, it’s hard to resist their Chicken Dinner, a rotisserie with all the sides, but then you’d miss out on the “Friends & Family” meal, a changing weekly menu created by a guest chef that includes wine or a cocktail. To give you a sense of what’s for dinner: At the time of writing, Chef Mark Ordaz was serving up a Pozole Verde, Escabeche, and Coctel de Camaron. To reserve your meal, email info@winner.nyc up to a week in advance. And don’t forget to include their infamous Monkey Bread, which is so sticky, it actually pulled one of my son’s loose teeth right out, arguably a way more satisfying experience than the string-and-doorknob method. 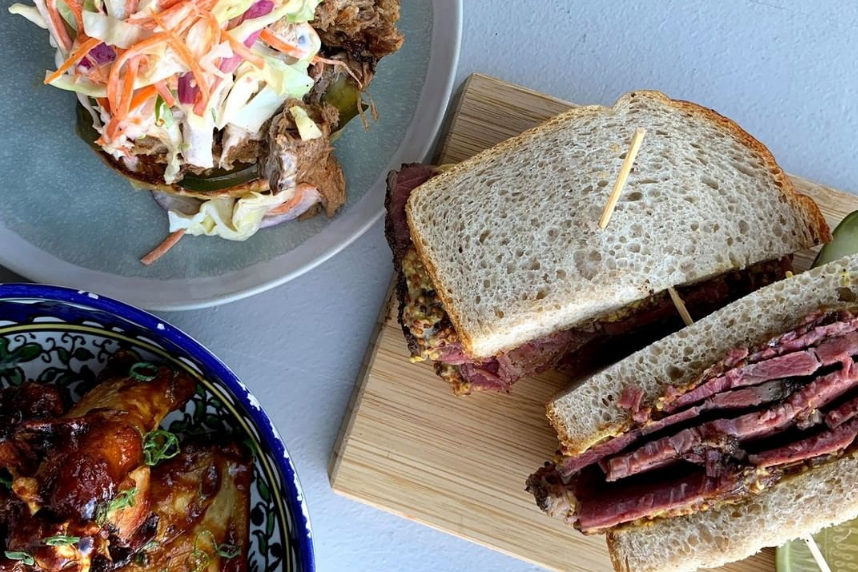 Carroll Park has a nice selection of large tables right next to the playground, which is extra convenient if you have children who’d rather run around than eat. Across the street is the restaurant, Emma’s Torch, a non-profit that empowers refugees through culinary training. We’ve written about the program’s origins already, but suffice to say that the food is delicious and your money is going toward a good cause.

Last time I was there, I ordered the Kabbouleh, a kale and quinoa salad that was both summery and hearty, but I had food envy at my friends’ Fried Chicken Sandwiches completed with slaw and a harissa-mayonnaise. You don’t have to order ahead, but be prepared to wait a while for your food if you don’t. 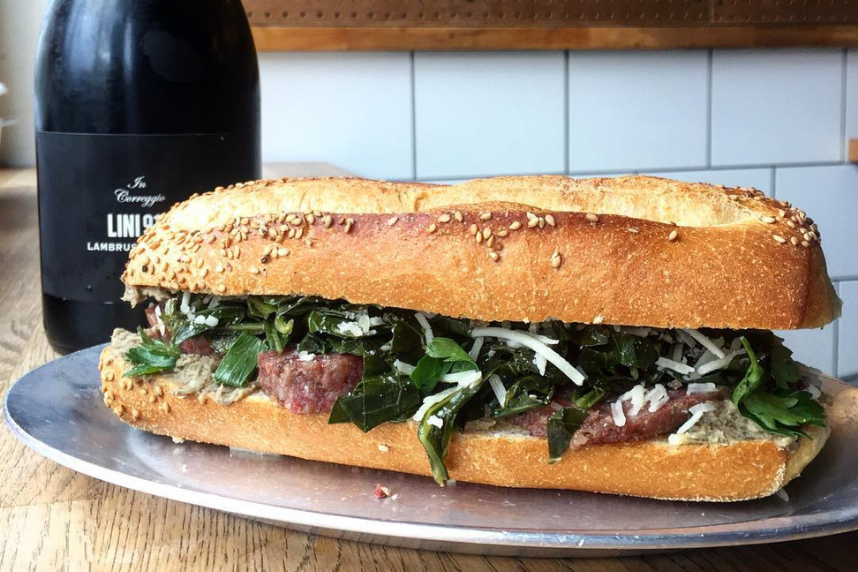 There is nowhere more romantic than Valentino Pier in Red Hook at sunset, in my opinion. Overlooking the water, this small park is isolated enough to feel like a secret, but crowded enough to remind you that you’re still in a city. A short walk away is Court Street Grocers, one of the best hero shops in Brooklyn. Mixing the old school with the artisanal, these sandwiches are all amazing.

Just be prepared to queue up and follow the shop’s Covid protocols—which include ordering inside and then waiting outside until your order is up; otherwise, you could find yourself the beneficiary of another truly New York experience: Being told off my an older Brooklyn gentleman who doesn’t care if you were just checking… Doing this resulted in me being herded outside like a stray cat. I haven’t gotten a scolding like that since I was a child, but damn, that Vegitalian sub was worth the dressing down. 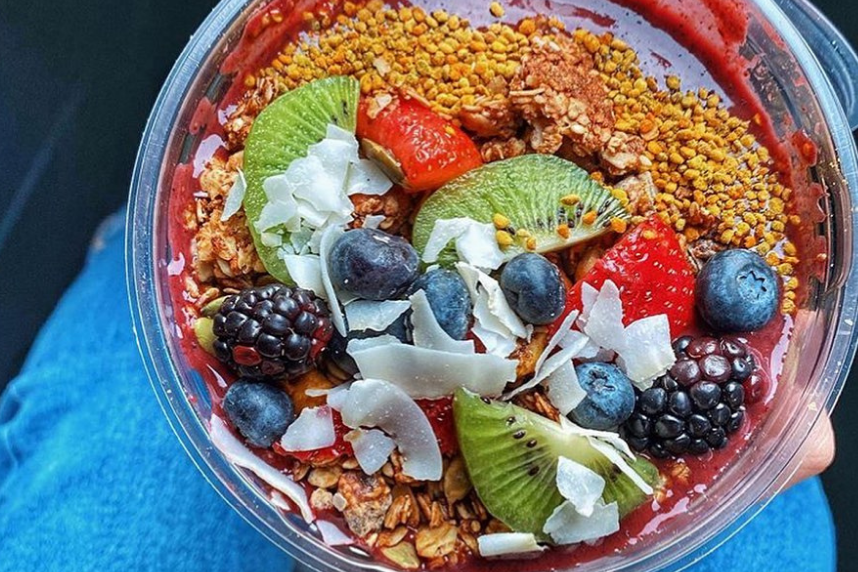 Since Domino Park opened in 2018, it’s been full of sunbathers and Instagrammers. But don’t let them dissuade you from occupying one of your own white circles spray painted on its lawn—and the epic views of the Manhattan skyline they afford.

On a nice day, it’s a lovely place for an impromptu get-together, and as a bonus, the park is literally surrounded by food choices. (Roberta’s Pizza even opened a location there during the pandemic, serving a limited menu of pizza and salad, with plans to extend to a full menu later in the spring.) For now, hit up Two Hands at the north side of the park, for deeply filling grain bowls and salads. An açaí bowl, smashed avocado sandwich, or breakfast roll on a picnic blanket is hard to beat.