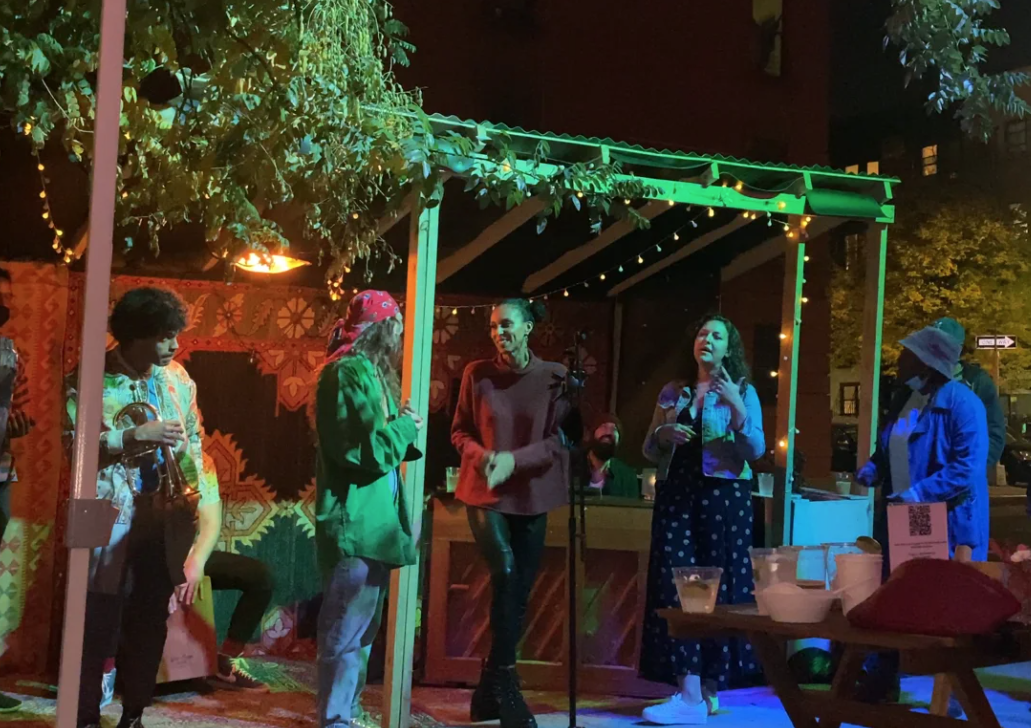 Like other social activities best enjoyed in close proximity to other people, going to live music shows all but ground to a halt during lockdown. But the wheels are once again turning. And the best proof of this forward momentum may just be the opening of Wild Birds, a bar and music venue in Crown Heights.

Its co-founders, Julian Klepper and Luke Bonner, were inspired to create a space with the energy of a house party—but enough square footage for people feel comfortable letting loose, even while socially distanced. “The idea is to be able to nurture the need to want to go out, and enjoy music, and move around and dance, and bump and grind, and meet people, and fully feel physically free, but also safe,” Bonner explains. Sounds like the dream, right?

From the start, they envisioned opening a place in the same vein as other New York live music venues like Bar LunÁtico in Bed-Stury and Barbès in Park Slope. “Monday would be rock steady night,” says Klepper. “Tuesday night was going to be Cumbia. Wednesday night was going to be Afrobeat. But Bonner adds that it wasn’t just the vibes of these spots that inspired them, it was their values too. “We were emulating other venues that make sure that musicians feel nurtured, and taken care of, and really valued for what they’re bringing to the table.”

When Wild Birds soft opened last summer, though, it wasn’t the fully realized dream that Klepper and Bonner had in mind due to Covid restrictions. Still, it quickly became a balm for a neighborhood that was aching for connection, especially the kind that music provides.

Since then, they’ve had bands featuring world-renowned musicians from Antibalas, the Skatalites, Charles Bradley and the Extraordinaires, Lake Street Drive, and more, come play outdoor sets in front of their space on Dean Street. “One of the nicest things to see during lockdown is that the whole sidewalk would be full of people just finally getting out of the house, and posting up, and working outside, and sitting in the sun,” Bonner recalls of the scene last summer.

And that’s still true a year later. On a recent visit, the sounds of Living Language, led by multi-instrumentalist Nikhil P. Yerawadekar, playing Fela Kuti could be heard wafting in the air from Wild Birds. The band was arranged on a street-side parklet, lined with colorful rugs, with tables spread out across the wide sidewalk, which Bonner called “their best friend.”

That outdoor space was the unexpected saving grace for opening during COVID. It spans an expansive block on Dean Street, just around the corner from Classon Avenue. The sounds of horns and drums made the still chilly, early spring night feel that much warmer. So did the hot toddy.

Now, after almost a year of outdoor-only shows, Wild Birds is settling into a new rhythm: From 4–9pm, bands play unamplified sets outside, then the indoor sets start, which can be amplified. Most of the shows, indoors and out, are suggested donation—only a few of the indoor ones will be ticketed.

Dancing however, is still yet to come, much to everyone’s frustration. It’s required Klepper, who used to host dance parties in his Brooklyn browntone, to play the role of enforcer, much to his dismay. “I still have to go up to people all the time and nicely tell them: ‘You can’t dance,’” he says. “It breaks my heart every single time I say it because, if you know me, that’s the antithesis of my general existence.” Hopefully, soon enough, he can go back to coaxing people out of the seats rather than asking them to sit down.