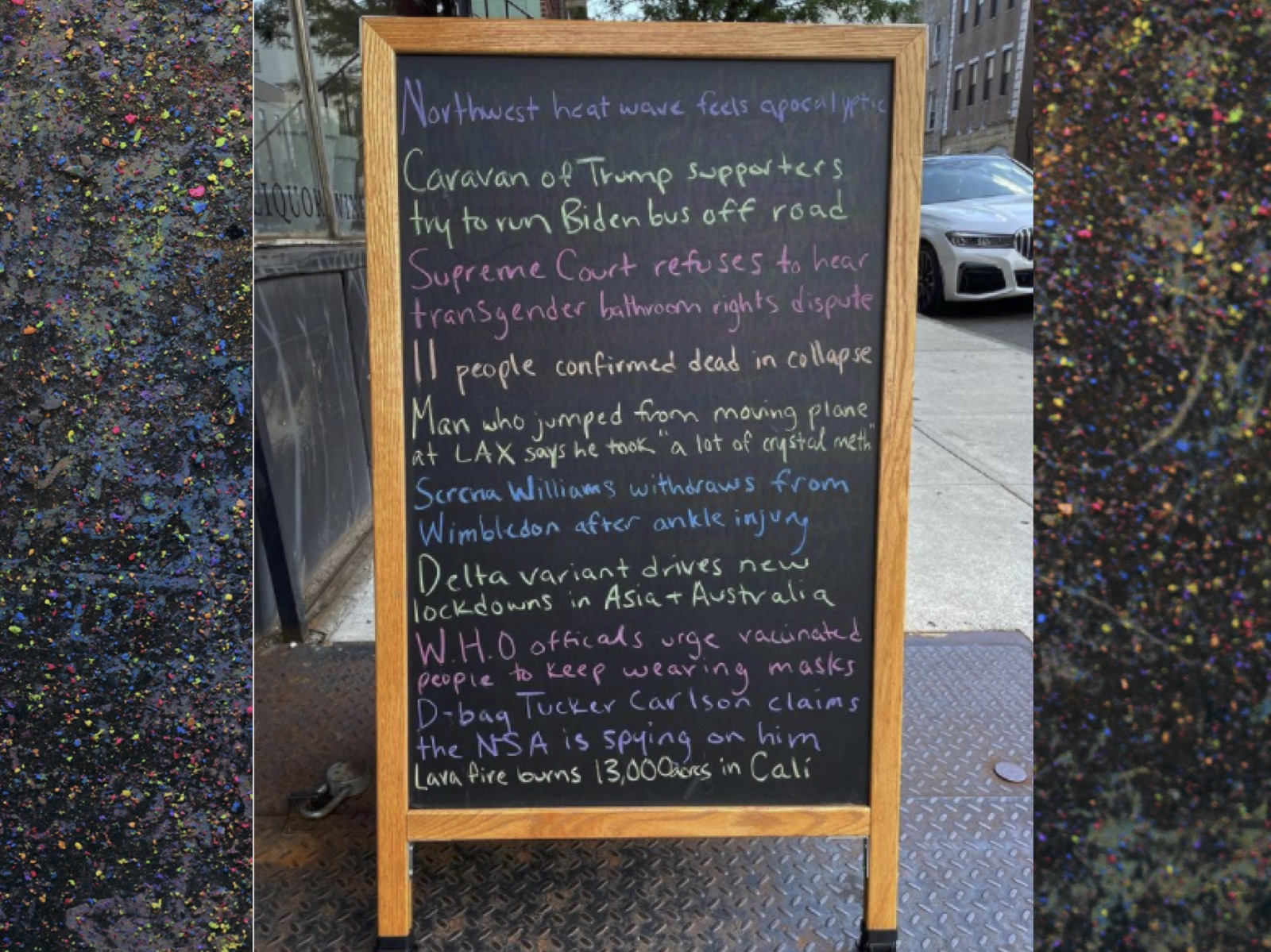 Every writer has their preferred medium, and for Talitha Whidbee, founder of Vine Wine in Williamsburg, it’s the chalkboard sign outside of her shop on Lorimer Street. There, she shares the pertinent news of the day (often a piece of her mind) with passersby—plus her Instagram followers, which number nearly 10,000. It’s a tradition she started at her former establishment, a café called TEN63 in Long Island City that served as a local gathering place on Jackson Avenue before closing in 2005.

“I felt like nobody would know we were open without some sort of street presence, but didn’t want to waste New Yorkers’ time with information on the soup of the day, or a terrible pun like ‘thanks a latte,’” she says.

By contrast, her signs are informative, full of fodder—and at times infuriating, depending on the politics and personal feelings of the reader. “We get a fair amount of abuse for the signs,” she says. “There is one person in the neighborhood who has threatened to kick it down; we also get DMs and comments from Texans explaining why we are wrong. Mostly I don’t care.”

What Whidbee does care about is the anatomy of an ideal A-frame, and over the years she’s managed to fine-tune the art of making a chalkboard sign people actually want to read. “It starts with listening to the BBC at night, and then I read numerous sources: The Guardian, Wall Street Journal, NY Post, and The New York Times,” she says. “After that, I dig through Reddit and Buzzfeed. I am a sucker for science news, so I try to keep a couple interesting science facts around in case I need one more item.”

And just like any good front page, the final product needs to be a mix of intel that appeals to a wide audience: “It should be filled with non-editorialized headlines that may start a conversation either among customers at home/work or in the store,” she says. (Same goes for the comments section of her posts.) “The sign should be a neutral balance of pop information—‘Naomi Campbell introduces world to her first child;’ ‘Bennifer is back and Boston is ecstatic’—with more hard-hitting news: ‘Nearly 240 Palestinians have been killed during the recent uprising;’ ‘Cuomo and de Blasio still arguing on how to reopen.’” All of which gets layered in alternating, neon-colored chalk, which she pre-soaks in water before writing so the colors really pop (pro-tip).

On occasion, Whidbee manages to create a chalkboard that really strikes a chord, attracting a couple thousand likes online as opposed to a couple hundred. “The signs that go viral are the ones that reflect my raw emotions at the moment,” she says. “The first was the ‘No Pope No Problem’ sign, where I listed all the things we could do while we were temporarily ‘popeless.’ It was meant to poke fun in a serious way at the ridiculous beliefs that the Pope upheld, it made it to the homepage of Reddit.”

Unsurprisingly, the signs that elicit the most attention tend to be ones on charged topics. “The BLM post, the F**k the NRA were both signs that got a ton of traction because I wrote the unedited version of what is rambling around my mind,” Whidbee says.

In a way, creating each days signage is as much an emotional outlet as it is a creative one. When I ask her to share her favorite part of the process, Whidbee gives pause: “That is a hard one,” she says. “Sometimes when the news writes itself—people in Florida being dumb, local politicians being dumb, etc.—I am excited to write the sign, but many times the sign is a complicated beast to try to find news for.

Yet somehow she always does.