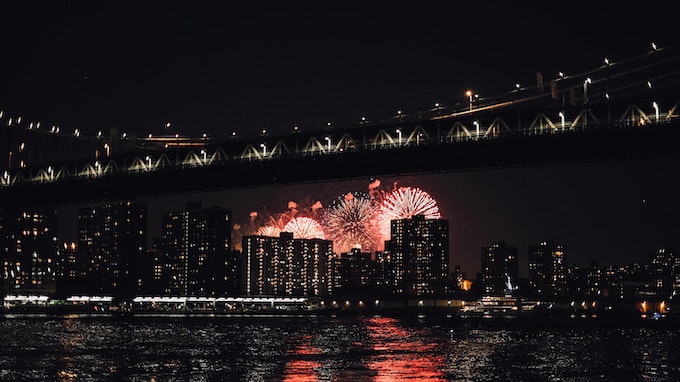 After one of the hottest stretches in memory, we are heading into a holiday weekend that looks, well, a little iffy weather-wise. If you were regretting not planning a nearby getaway before all the Airbnbs booked up, take solace in the fact that tomorrow looks like a washout, and you’re probably better off saving your cash and sticking around here anyway.

And, as anyone who has lived here for a while can tell you, a holiday weekend where you find yourself in the city with nothing on the calendar isn’t the worst thing: It’s the only time you even have a chance of getting reservations at restaurants you’re normally shut out of—and it can even be a good opportunity to do touristy stuff that may be slightly less besieged with crowds when people who are slightly more organized (ahem, no judgement, I’m staying local this weekend too!) are filling up your social media with pics of the Hudson Valley or the Hamptons.

IDK, call me crazy, but after a pandemic nearly wiped this city out, maybe it’s time for us jaded New Yorkers to embrace the cheesiness and go all in on beleaguered Midtown, as Eve Peyser posited in a recent op-ed in The New York Times.

By way of example, last weekend, I spent a sweltering afternoon in Hudson Yards of all places, with a friend who was visiting from out of town. We climbed to the top of The Vessel and peeped the crazy views from The Edge (although I was too scared to actually stand on the glass-bottom floor). Then we had lunch and frozen drinks at Mercado Little Spain and, honestly, it was really fun! Was it cheesy and overpriced and crowded? Sure, but once I accepted those inevitabilities I got into it, and when a total stranger got down on one knee to propose to his girlfriend from 100 stories above 11th Avenue, I was right there clapping and “woohooing” along with the best of ‘em. Is Little Island in my future this weekend? Never say never—there are still some timed entry slots available.

After all, you’re going to have to embrace the crowds this weekend if you want a good Fourth of July fireworks vantage point, unless you or someone you know has a well-situated rooftop. So why stop there?! Starting tonight, Governors Island is open until 10pm on weekend nights, which may be a good move if you’re looking for a change of scenery.

On Saturday night, check out a special holiday concert by Doll Parts, a Dolly Parton cover band, at The Bell House. Nathan’s at Coney Island will be hosting its annual Fourth of July Hot Dog Eating Contest on Sunday, and there’s a brand-new roller coaster called The Phoenix opening at Deno’s Wonder Wheel this weekend that you can check out while you are there.

On Sunday night, Skyline Theater is screening the classic summer blockbuster Independence Day outside on the waterfront in Greenpoint, which just happens to be a perfect place to take in the Macy’s-sponsored fireworks extravaganza. Later in the week, you may try to score a ticket to The Merry Wives of Windsor, the play that marks this summer’s return of the beloved Shakespeare in the Park series, which opens for the season on Tuesday.

I’m eager to watch Summer of Soul, a new, very well-reviewed documentary directed by Questlove about the 1969 Harlem Cultural Festival, which means I may make my first post-pandemic trip to the Alamo Drafthouse this weekend. And while I’m in City Point, the immersive installation there called Light Leaks looks like it’s worth a visit, and I can’t go anywhere near DeKalb Market Hall without buying a Kouign Amann from Cafe D’Avignon.

Monday looks like the only beach day of the bunch this weekend, but I’ll make a game-time decision on whether I’m up for the madness that will surely be the scene at the Rockaways. If not, I may hit up Pig Beach for some BBQ, the way that I did last weekend for a friend’s birthday, or meet people for drinks and a cheese board in the gorgeous new outdoor space behind Barely Disfigured. On Monday night, Butterboy, the comedy show hosted by Aparna Nancherla, Maeve Higgins, and Jo Firestone is back live and in-person at Littlefield, which may be the ideal cap on a lovely long weekend.

Have a happy and safe Fourth, everybody, no matter what your plans are!