12/18/09: Bye-Bye Botanica? This just in from the GM at Botanica: The Red Hook cocktail bar/restaurant is also on the verge of closing. See comments below for the full scoop.

12/17/09: Monkey Business Sad news comes by way of Monkeytown’s owner Montgomery Knott, who tells us that due to landlord issues the space will close on January 24, 2010. The venue brought dinner and a movie to next levels (like this week’s 6-course ski lodge meal with vintage ski movies projected on the four screens). 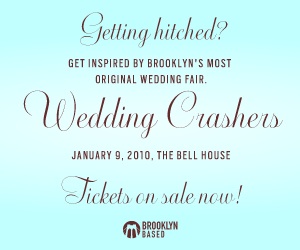 12/9/09: Early December Williamsburg Resto Shakeups Hot on the heels of the news of the new M Noodle Bar on Metropolitan, we hear that the original M Shanghai will move around the corner to the former Malta location on Grand Street. The Khim’s Millenium Mart empire is expanding–into the restaurant industry. The former market location on the west side of Bedford between Grand and North 1st will become an “American” restaurant called No Plate, so you’ll have to cross the street to buy your flowers from now on. K&M Bar is opening a resto on Bedford at North 9th. No word yet on the menu, but from the outside it looks like a standard gastropub. Zak Pelaccio and Robbie Richter’s S. 6th Street Fatty ‘Cue will open at the end of January (just a few blocks southwest of that other South Williamsburg BBQ joint we’re all drooling over an opening date of, Pies N’ Thighs). And, well, this one’s a doozie but you probably saw it coming. Freemans Williamsburg–just food, no clothing shop yet–is definitely happening. The location is almost decided and that’s all we’re saying for now. -CT 11/20 So the esteemed Robert Sietsema (who we super heart) just posted this list of the best restaurants in Williamsburg. Of course we have a few quibbles (why doesn’t anyone love Roebling Tea Room? Sure, Dennis Spina is a friend, but that doesn’t change the fact that he is genius in that tiny kitchen), but just one major complaint. Egg, which is number seven on the list, just cleaned house, sweeping out Millicent Souris (who has now taken over lunch service at Roebling Tea Room: scotch eggs, smoked trout on herbed lentils, biscuits to kill and die for) and Stephen Tanner of Marlow and Sons and Pies ‘n’ Thighs fame. It’s hard to believe that Egg’s southern fried menu is still as good without those two pirates in the galley.

10/19 The Woods, a bar owned by some of the owners of Savalas, recently opened on South 4th between Kent and Wythe. Lots of great cans, including Schlitz, and a pickle back shot for $6. And, the taco truck that used to park on Bedford near Metropolitan has taken up shop in the backyard, serving huge burritos for just $5. Call it the new BB headquarters. 8/10 The Brooklyn Kitchen is opening a cooking school at 100 Frost street (at Meeker). Get a sneak peek at the enormous space on Wednesday morning at their Kikuichi knife event. Mr. Ohe, a master craftsman from Japan, will be sharpening, demoing and engraving knives. A sushi chef from Blue Ribbon will also demo, and the event is free with RSVP. 6/19 The aptly named motorcycle shop “The Shop” on Metropolitan Ave. between Roebling and Driggs is expanding their business–to a morning coffee shop. The idea is that friends of the shop and neighbors will drop in for coffee and local pastries. Co-owner Dan Lyle even had 400 of his aunt’s iced oatmeal cookies express shipped in from the midwest for their launch tomorrow morning. We hear the plan will be to eventually have adult beverages in the evenings, too. 6/15 The north end of Manhattan Ave. in Greenpoint will be shut down tomorrow and Wednesday from Freeman up to Ash Street for a Fourth of July parade scene in a new Jennifer Aniston movie called The Bounty. They tried to get Cher to appear on one of the floats in a cameo, but she wasn’t able to fit it in, so now Bette Midler is taking her place. Also, the scene includes a car chase and van explosion. 6/9 Word on the Williamsburg street is that Stephen Tanner, one of the original owners of Pies ‘n’ Thighs and a cook at Egg, will be the chef at the new restaurant taking over Black Betty. Look forward to Tanner’s signature “Whopper-style” burgers (the secret is hot lettuce). Martha Stewart (who has been spotted hanging in Brooklyn quite a bit lately) sent producers to check out McClure’s Pickles today. They’re working on a Brooklyn segment and McClure is slated to do a demo for the cameras in their kitchen later this month. 6/5 We have it on good (if slightly intoxicated) authority that Michael McDonald approached Grizzly Bear about doing a cover. McDonald was spotted at their recent show at Town Hall. No word yet on which song the yacht rocker wants to have his way with. 5/26 Overheard Tuesday afternoon: Just in! Fancy pizza restaurant (think Roberta’s or Motorino) to open next week at Halsey and Lewis in Bed Stuy.

OVERHEARD THIS MEMORIAL DAY WEEKEND (Lots of Red Hook and Williamsburg Gossip Edition): Like last year, the Cunard cruise ships in Red Hook will launch fireworks before departing for their open sea cruises (so you can see fireworks from Brooklyn this summer after all)! The next dates appear to be July 1 and July 6, and we suspect they’ll go off around 7:30-8pm. The owner of Botanica also makes parachutes for DARPA (shhhh…). When the Red Hook Lobster Pound begins selling lobster rolls at the Brooklyn Flea sometime this summer, they’ll be made with authentic buns baked in Maine. Saipua is moving to Van Dyke Street in July–more room for their booming flower-arrangements-for-weddings business. And on the Northside, Cheeks (in Williamsburg) will soon be closing closed — Melanie Schrimpe is moving on to New Jersey “to be poor.” Guess we didn’t show her delicious carrot cake cupcakes enough love. Also word on the street is that Iona is opening something new in the spot on S. 6th and Bedford that has become a bit of a problem spot, having been a brief, troubled home to first Vinas and then Bedford and Berry. Down the block the East River Bar has a food truck parked in the backyard, and plans to turn it into an on-site, late-night kitchen solving their booze, but no food problem. They’ve been hosting informal country music Thursdays lately, complete with banjos and washboards.