Thanksgiving with Chef Esther Choi’s family is a true mash-up.

“Our spread was always a fusion of the traditional style Thanksgiving with hints of Korean flavors,” said Choi, the chef and owner of Mokbar in Prospect Heights. “Our turkey was always stuffed with sticky rice, an amazing recipe my grandmother created. We always had kimchi on the table but had all the traditional sides such as mashed potatoes, string beans, corn…”

This dish, which Choi calls “really special,” was inspired by the unique way she celebrated the holiday.

“Sometimes having the same old thing is boring,” she said. “If you want something new and exciting, cooking with kimchi is really fun and adds a flavor profile that is unexpected.” 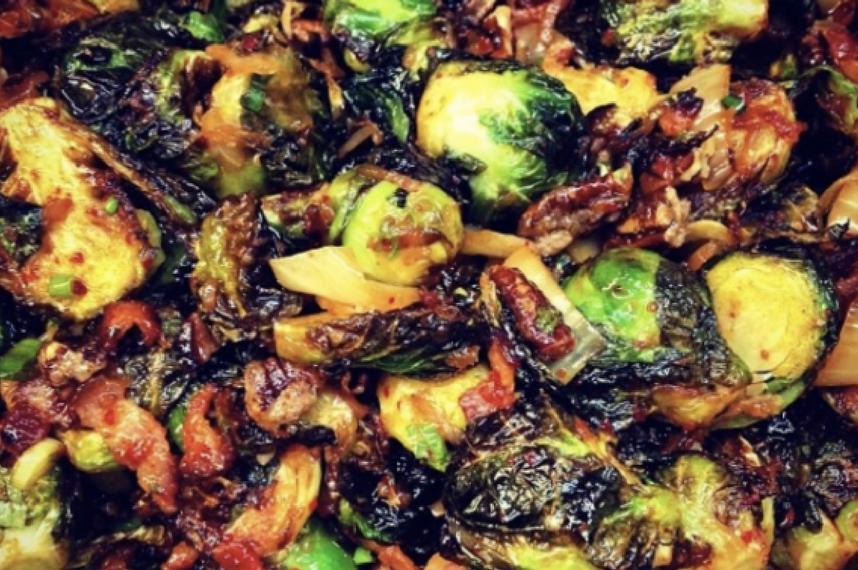 Place trimmed Brussels sprouts on a sheet pan and drizzle with sesame oil, salt and pepper. Roast for about 30-40 minutes until nicely browned and cooked through.

While Brussels are roasting, place a skillet over medium-high heat, melt butter and add bacon. Saute until very crispy. Take bacon out but leave the fat in the pan. Add kimchi and caramelize for about 7-8 minutes until nicely browned and soft. Add maple syrup.