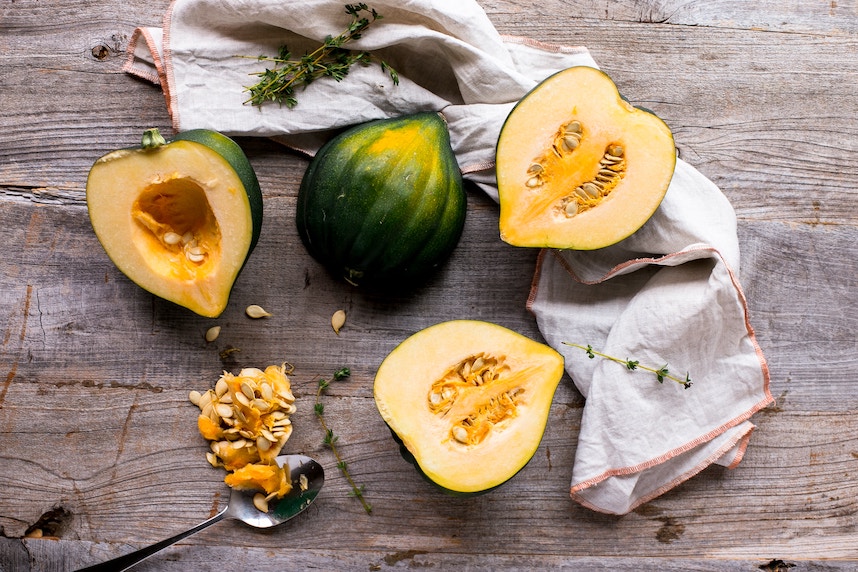 After years of serving a traditional Thanksgiving catering menu, Loren Michelle of Naturally Delicious in Carroll Gardens saw that her vegan clients only had a few options for their feast.

“We chose to go with the stuffed acorn squash as a vegan option to meet the demands of our clients seeking out a healthy alternative to the traditional Thanksgiving,” she said. An earlier version they prepared used feta, brown rice, cherries and chickpeas; to make this one dairy-free they swapped in tempeh and a few other in-season ingredients. “It’s a great dish that offers a taste of fall with aromatic vegetables, curry, pecans and cranberries.”

The presentation is equally eye-catching, and will easily be the most beautiful dish on the table. 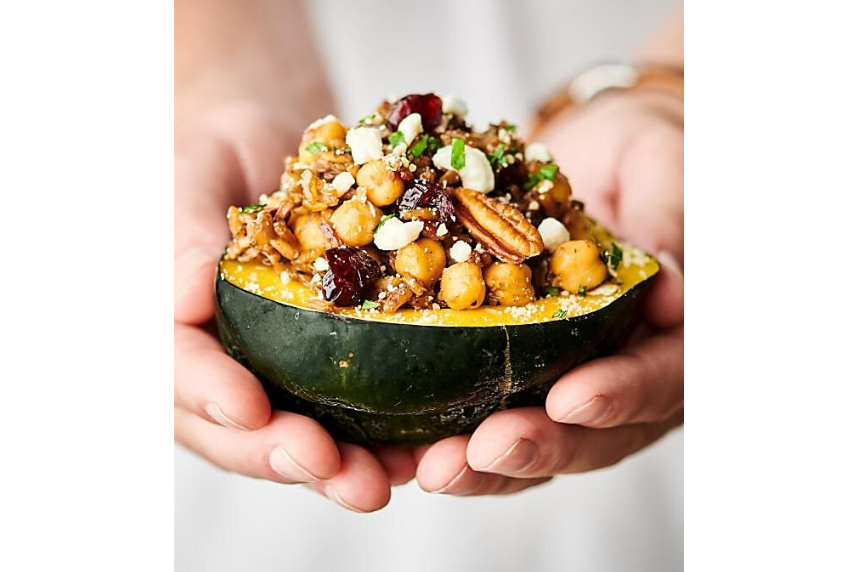 Position an oven rack in the middle of the oven; preheat the oven to 400°F. Cut each squash in half lengthwise and scoop out and discard the seeds. Arrange the halves in a large baking dish, flesh-side up.

Roast until the squash is fork-tender, 50 to 60 minutes. Poke the inside of the squash halves with a fork and brush generously with more of the maple mixture.

Meanwhile, heat the remaining 2 tablespoon oil in a medium saucepan over medium-high heat. Add the onions and crushed garlic and cook, stirring occasionally, until soft and golden brown, about 6 minutes. Add the quinoa, curry powder, cinnamon, and 1 teaspoon salt and stir until the spices are toasted, about 1 minute. Add the cubed tempeh and cook for another 2 minutes. Add 2 cups water and bring to a simmer.

Lower the heat, cover the pan and simmer, stirring occasionally, until the quinoa is tender and most of the liquid is absorbed, 15  to 20 minutes. Remove from the heat and add the chopped kale. Let sit, covered, for 5 minutes. Uncover and stir in the cranberries, remaining maple mixture, half of the parsley and half of the pecans.

Stuff the squash halves with the quinoa mixture and sprinkle with the remaining parsley and pecans.  Serve warm or at room temperature.

The squash may be baked and stuffed the day before and refrigerated. To reheat, cover the baking dish loosely with foil and reheat in a 350°F oven, checking the squash every 5 minutes until it is hot.