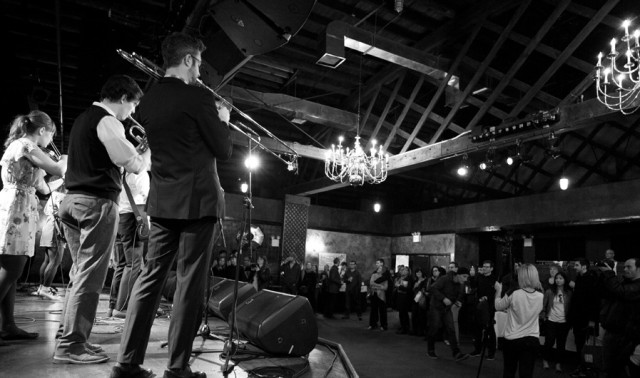 When it comes to your wedding, the most significant event you’ll ever throw, you don’t want an uninspired wedding singer. You need awesome musicians who can play everything you love, get your aunt on the dance floor and leave everyone with the lasting impression of your impeccable taste in music. To make it easy to find the perfect soundtrack to your big day, we curate a live wedding band showcase called Rock the Wedding Bells and our spring edition returns Wednesday, March 25 at The Bell House, with small bites from Red Table Catering.

Over the course of the night you’ll hear from a range of small ensembles and eight-piece bands, all of whom are not just great at playing weddings–these are kick-ass bands, period, filled with gigging musicians who’ve performed with the Psychedelic Furs, David Byrne, Jay-Z, Andrew Bird, Norah Jones, AIR and more. Whether your vision includes a pop string quartet who can cover the Smiths, a dance band that can play Janelle Monae and Johnny Cash, Prohibition-era jazz, 80s jams, classic rock, R&B or soul, you’ll hear the best bands in New York to rock your wedding.

Tickets, which include snacks from Red Table Catering, are $12 at the door but you can get em for $5 until 6pm today, here.

Baby Soda is an acoustic, energetic band that sings and swings. Their classic sound is rooted in Prohibition-era swing, New Orleans jazz, and southern gospel music. At weddings, their joyful performances resonate with all guests, young and old.

Tribute String Quartets’s interpretations of your favorite songs by Hall ‘N’ Oates, Elton John, Sam Cooke, and Journey set them far apart from the crowded world of wedding string quartets. Plus, if you take advantage of their ability to create custom arrangements of your own special requests, it’s like having a personal mini-orchestra for your wedding.

This gaggle of musician friends put The Affections together as a side project to play a family friend’s wedding a number of years back, but the invitations to play keep coming. Expect to dance to live, unhinged covers of Chuck Berry, Elvis, Sly Stone, Talking Heads, Michael Jackson, Sam the Sham & The Pharaohs, Kinks, Clash, Stones, James Brown, Blondie, and more.

Actively not your parents’ wedding band while still a band your parents will love, MIXTAPE is a disco-free zone with a mantra of “No to the Bee Gees, Yes to the Black Keys!” Comprised of conservatory trained musicians, the band ranges in size from a core six-piece band to ten-pieces with strings and horns for a fun and full sound and look and can also provide classical music for ceremonies and jazz or bluegrass for cocktail hours. Its infinite repertoire spans from modern indie darlings like Phoenix, MGMT, Arcade Fire and Beck, to classic and glam rockers like the Rolling Stones, David Bowie, AC/DC, and Queen, to ’80s and New Wave gems like Devo, The Cure, Talking Heads and The Clash, to ’90s and grunge favorites like Weezer, Nirvana, The Pixies and Pavement to those special pop, Motown and soul hits that we all can agree are awesome like Paul Simon, Hall & Oates, Stevie Wonder and, of course, Michael Jackson.

Brooklyn cover band The Loyales offers a multitude of musical genre options (with the exception of contemporary Top 40). Lead singer and bandleader Milton easily shifts from rare oldies, to classic rock, to soul, or even country.

The Joe McGinty Seven’s live shows are the engine behind the Loser’s Lounge, one of the most exciting on-going parties in New York City. Their fun and energetic performances always get everyone up and dancing. The Joe McGinty Seven have also provided entertainment for some of the most prestigious private events in New York, including: The Gala for The New Museum, The Gala for Am Far (backing Stevie Wonder, Elton John and Dionne Warwick), the closing ceremony for The Tribeca Film Festival, The Directors Guild Awards at The Waldorf Astoria, and many more.  Their music was featured in the wedding reception scenes in the Dustin Hoffman film “Last Chance Harvey.” The Joe McGinty Seven are known as one of the best party bands around because they always deliver unforgettable music and entertainment for every occasion.

9:45pm Kinky Spigot and the Welders

Kinky Spigot and the Welders has been serving the New York City area since 2006 when its eight members–musicians who had known each other for years from playing around New York City – decided to form a band to perform some of their favorite music: the sweet Motown of the ‘60s, the ground-shaking funk of the ‘70s, the soulful R&B of the ‘90s, and the eclectic indie sounds of today. The idea was this: when you play music you love with top-line musicians, the music will always sound fresh as the day it was written. And that freshness is what makes or breaks a good dance party. Unlike the many tired veterans who roll out dead-sounding wedding favorites, Kinky is a bold, sassy, and stylish band that will ignite the dance floor at your event. They genuinely love playing music together, and it shows.