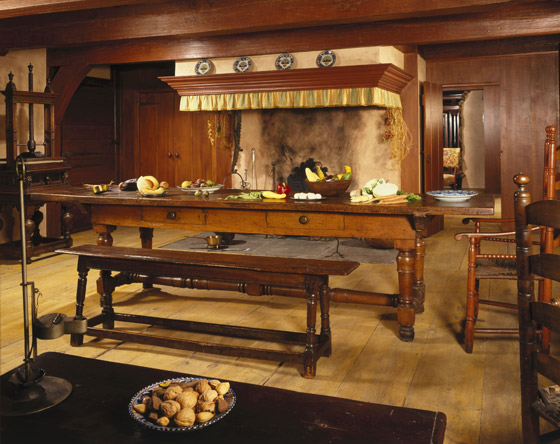 The interior of the Schenck House at Brooklyn Museum

The historical homes of Brooklyn share tales of survival—some endured wars, others display the wounds of war, and still others sat for years abandoned by their wealthy families who up and moved to Long Island, like the Lefferts House in Prospect Park. Meander south through the borough from the Queens border through Crown Heights to the heart of Prospect Park and treat yourself to a hands-on lesson in Brooklyn history.

The Vander Ende-Onderdonk House, referred to simply as the Onderdonk House is, one of the oldest historical houses in the area. Officially claimed by Queens, it sits on the borough border at the intersection of Bushwick and Ridgewood. It is, as Linda Monte, president of the Ridgewood historical society explains, “a rare example of a Dutch-American gambrel roof farmhouse, incorporating stone construction.” Its Dutch-style construction is even more uncommon considering that English settlements were much more prevalent along the Queens and Brooklyn border when it was built. Perhaps because of this, the Onderdonk house played a role in establishing the divide between Queens and Kings counties in the late 18th century.

Adrian and Ann Wyckoff Onderdonk added a frame addition to the structure around 1821 when they purchased it on what is now Flushing Avenue, a pathway originally traversed by Native Americans trekking the area before boroughs existed. As Monte points out, Flushing Avenue “in modern times continues to be a main thoroughfare between Brooklyn and Queens.”
The Vander Ende-Onderdonk House, 1820 Flushing Avenue, open Saturdays, 1 to 5pm, info@onderdonkhouse.org for appointments 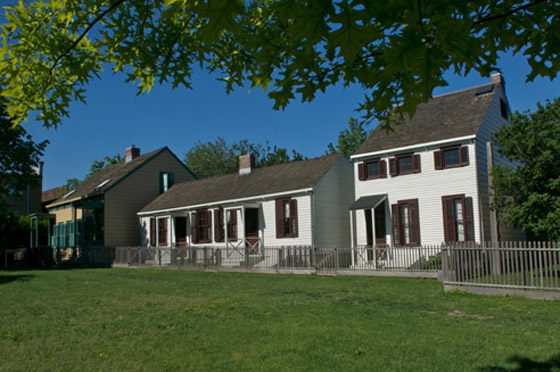 The Weeksville Houses in Crown Heights

To the south in Crown Heights, the Hunterfly Road Houses stand in homage to Weeksville, an early community of African Americans who settled in Brooklyn in 1838, just over a decade after slavery was outlawed in New York State. The trio of houses, which are maintained by the Weeksville Heritage Center, were built between 1840 and 1880 and have been decorated with period pieces to represent three distinct eras in the life of the Weeksville community: the mid-1800s during the Civil War, the turn of the century in the early 1900s, and the 1930s Depression era. The three eras “provide a sense of continuity of the original Weeksville community,” says Pam Green, Executive Director.

The community thrived for many years, and many Weeksville residents were able to vote, because of their status as property owners. The original inhabitants of these three homes likely read one of the two newspapers published by the community and sent their children to one of the nation’s first fully integrated schools. “An intentional community is unique in that they planned how they wanted to live, to thrive,” says Green. “Remnants of it still survive today.”
Weeksville Heritage Center, 1698 Bergen Street, walk-in tours, Tuesday to Friday at 1pm, 2pm and 3pm, info@weeksvillesociety.org for appointments

On the fourth floor Decorative Arts Gallery of the Brooklyn Museum stands the Jan Martense Schenck House, far removed from the rural island off the shore of Brooklyn where it once stood. Mill Basin, then an island, was owned by Schenck in 1675 when the house is thought to have been constructed. The urbanization process began in the 1920s and the creeks were filled in to create more space for building homes, turning the island where the Schenck House stood into mainland.

Characterized by its steep roof and V-shaped anchor braces, the house marks a shift in Dutch design. “This is when Dutch architecture began to not look like the Netherlands and start looking like America,” says Kevin Stayton, chief curator. The structure survived on-site in far South Brooklyn until 1952 due to several additions. “It’s like you have the old original house buried inside the remodeled exterior,” Stayton says. Even after the remodeling, bed boxes and a jambless hooded fireplace sticking out from the wall illustrate some of the cornerstones of early Dutch architecture and design.
Brooklyn Museum, 200 Eastern Parkway, Wednesday, Saturday and Sunday 11am to 6pm, Thursday and Friday 11 am to 10pm 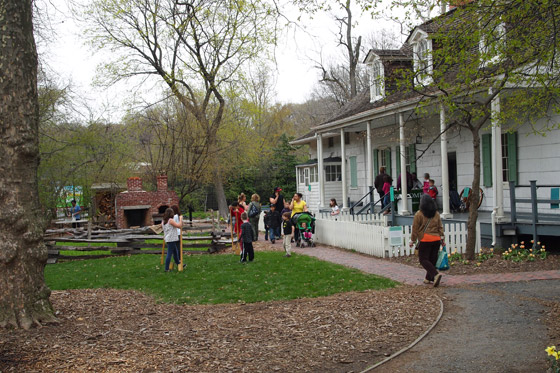 The Lefferts House in Prospect Park

If you’re looking for an educational place to bring the little ones, take a break from the BBQ or the frisbee and visit the Lefferts Historic House in Prospect Park. “It’s a comfortable family environment for kids to explore,” says director B.H. Holliday.

Built in 1783, the white oak timber frame structure was preserved as the last farmhouse from the village of Flatbush during a colonial revival period. The Lefferts family can trace its Brooklyn roots back to 1660 when Pieter Janse Hagewout arrived in the New World. His son, Leffert Pietersen, bought the land the Lefferts House originally stood on in 1687, which was then continually inhabited by Lefferts until 1918, when the farmhouse was moved just six blocks from its original location. The reasoning? “[The] Lefferts wanted to donate the house [to the city], but they did not want to donate the land,” Holliday explains with a laugh.

The current house was built on the foundation of an earlier Lefferts house that burned down in the Battle of Brooklyn in August 1776. “The interior reflects remodeling from the early 1820s, but the footprint, exterior, and bones of the building reflect the original 1783 construction,” Holliday explains.
Lefferts Historic House, children’s corner Prospect Park, by the zoo, open Thursday through Sunday, noon to 4pm from April through Labor Day, Saturday and Sunday the rest of the year, closed in January