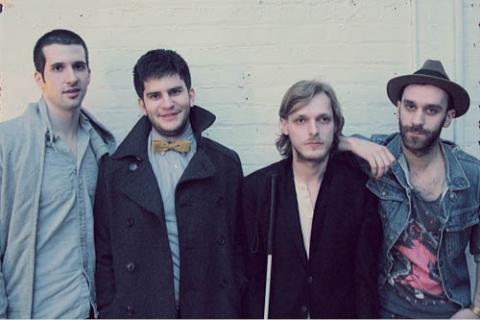 I think we are all blessed to live in a city that has a progressive music scene, but sometimes that makes it hard for certain bands to stand out. Ambassadors does not have this problem, and I’m not sure they could blend in even if they tried. Drawing from many different genres–blues, dark electronica, gospel, rock n’ roll–this is the type of music you really feel. The group is made up of four Brooklyn residents: brothers Sam (lead singer/songwriter and multi-instrumentalist) and Casey Harris (keyboardist), Noah Feldshuh (lead guitarist, co-songwriter), and drummer Adam Levin. I spoke with Sam about their history, respective influences, and one of their songs to have sex to (really).

When did Ambassadors come together and how? What’s the origin of the name?
Noah and I have known each other since kindergarten and have been playing music together since middle school. Casey and I grew up in a very musical household (our mother was a caberet/jazz singer, our dad an ex-country songwriter). We were constantly practicing our respective instruments on our own, so when I formed my first band with Noah, Casey almost immediately started playing along with us. We brought on Adam as our drummer after the three of us relocated to New York where Noah and I were attending the New School. The band as it is now has been in existence for around 2 years. As far as the name, Ambassadors was completely random; we took it off the name of a cymbal on Adam’s drum kit ’cause it sounded sweet.

How would you describe the style of music you guys play and the influences you draw from?
We play dark, tribal, dance rock n’ roll. Very groove-oriented and melodic, steeped in a lot of gospel, blues and soul. I have always idolized singers like Nina Simone, Garnet Mimms, Ray Charles, Mavis Staples, and Sam Cooke. In high school I was heavy into The Stooges, The Clash, and The Damned while Casey was heavily into bands like The Meters, Sly, Ohio Players, Kool & the Gang, and Herbie Hancock. It wasn’t until a little later when I started listening to a lot of electronic stuff like Jason Forrest, DJ Shadow, and Black Moth Super Rainbow that we started incorporating that type of sound into our music too.

What’s your music-making process?
I feel like the way we write isn’t too different from the way most bands do it. Most of the time one person comes up with either a riff, some chord changes, lyrics, or a even just a simple melody and we build from there, each person adding their own texture to it. Or we pay Dr. Luke a million dollars to write us a song and kick back.

When’s your debut LP Litost scheduled to be released?
No set release date for the record yet; we’re talking to a few different labels right now, but who knows? Maybe we’ll just politely tell everyone to fuck off and put it out ourselves like every other band is doing these days, haha.

What track are you happiest with?
We are equally happy with ALL the tracks on the record… But right now my “Unconsolable” has a special place in my heart because my friend told me he had sex to it the other day. Which is kinda cool, but also kinda weird.

What’s next?
We’re doing a ton of shows here in New York; Tomorrow night, 5/24, at Tammany Hall in Manhattan, June 7th at Mercury Lounge to name a few…And we’ll be doing three East Coast dates with The Dig and The Postelles in Boston (TT The Bears Place), Philly (Kung-fu Necktie), and DC (The Red Palace). Other than that, we’re looking to get back on the road full-time most likely sometime in September.

I saw you guys perform at at Cameo Gallery on the 7th–great show, everyone was dancing around and singing. Seems like you guys have a pretty loyal fan base. How can soon-to-be fans gain access to your music?
We’ve got an awesome fanbase here in New York who have been so incredibly loyal and proactive when it comes to spreading the word to their friends about us. We have a bandcamp, twitter, tumblr, and facebook, that we check and update regularly. Right now, we’re releasing free mp3s of a new cover song every week that we put up on all these sites; they’re all super weird and really fun and everyone seems to dig em. Last week we did a cover of Ginuwine’s “Pony” which was my favorite song in, like, 5th grade.