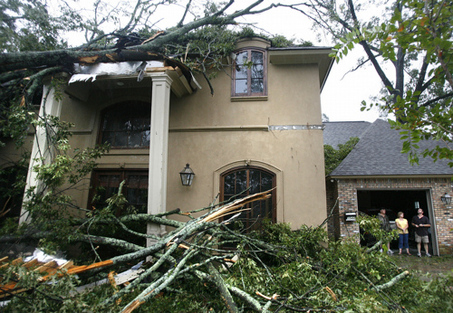 Gustav vs. Irene: No contest

I moved down to Louisiana a lifelong Northeasterner, and moved back three years later at least part Southerner. The pivot point was Hurricane Gustav.

I suspect some of us in Brooklyn got a kick out of our home being the center of attention (again/still) when Irene loomed, causing mandatory evacuations. At least it was something new to complain about. I enjoyed the permission to laze all weekend, as long as it was pretty certain nothing bad would really happen. But in late August 2008, after my first year living in Baton Rouge, when Hurricane Gustav approached as a Category 4 storm, this was not at all so sure.

One thing was certain: Anderson Cooper was in town. My fiance Tom and I got this tip from our friend Jonathan, who was working 20-hour days in meetings with Governor Jindal and other officials to prepare for the emergency. Fox News, CBS, NBC, and ABC had all also set up shop at the disaster management headquarters in Baton Rouge, and from there they commuted the 70 miles down to New Orleans, our nation’s tragedy outpost, to report.

To locals, this was just hurricane season, but from the concerned previews on the national news, there was a ratings-teasing question: “Could this be another Katrina?” This particular hurricane took mercy on New Orleans, bypassing the Crescent City. However, in Baton Rouge Gustav became the worst hurricane in memory. (And memory is pretty good down there, because the past? You’re soaking in it.) The damage to the capitol city was more wind than water: practically every other Craftsman home in the lush Garden District now had a majestic 300-year-old live oak through its roof. Nearly all business was shut down for the first few days, with some remaining closed for about a week. Before the storm even got started for us in Baton Rouge, though, Anderson Cooper went home. (Good-bye! Off you go in your private helicopter to the Vanderbilt Estate!)

Our artist friends next door, Ashley and Stefan, told us that Katrina hadn’t hit Baton Rouge hard, storm-wise (population-wise was another matter). Our side of the street had no electricity for three weeks, but that was less due to emergency and more just due to the Baton Rouge Fuckup Factor™. Ash and Stef had to use extension cords strung from homes across Hearthstone Drive.

This is what you talk about during the hurricane: other hurricanes. “The hurricane” period was the next five days that we sat without power, marinading in our sweat. We had the same conversations every night in slightly different locations (this can be extrapolated to describe our whole relationship with the neighbors): around our dining room table by candlelight, or in their living room by hurricane lamp, with their wall-mounted longhorn skull casting jagged shadows, or outside in the grass driveway between our yards, drinking canned beer in koozies, and whatever whiskey poor frazzled Jonathan brought over when he finally escaped the clutches of Jindal and the gang each night.

We started each evening’s hurricane party playing the Hold Steady album Stay Positive on the iPod speakers, which we charged using the line from our other neighbor’s genny. Other than just being great and Springsteenesque, there was a sense that this band cared about slobs like us stuck in the swamp. They played the local restaurant Chelsea’s and they killed it! “Subpoened in Texas, sequestered in Memphis.” This was about us, kind of!

To use up the contents of our freezers, we grilled fish that Ashley and Stefan had caught, with sides and even a toaster-oven eggplant parm, and always there was beer (this too can be extrapolated to describe our entire time in Louisiana: And Always There Was Beer).

When it was time to sleep you better hope you could sleep. We camped in the office, the only room with screened windows that weren’t painted shut. During a post-hurricane late night thunderstorm I awoke to extreme humidity that was thickening from the mist filtering in through the screens. I pictured everything I owned, my school papers, journals, mementos, slowly moistening. I considered what it must have been like in New Orleans during Katrina, then scaled back to the more manageable anxiety of what it must be like for the people one neighborhood over in the Garden District who now shared their living room with a live oak.

(During this time, not a single bead of sweat was drawn on Anderson Cooper’s fitted black T-shirt.)

The days were thick and hot, the air a wet, enveloping mass. Time stood so still it might have actually gone backwards. Nothing moved. We listened to the radio, we read, and we concluded that the pre-air-conditioned South was the reason Southerners became slower in speech and movement.

My day-long silent, and occasional vocalized shout was, “WHY DO PEOPLE LIVE HERE?” How did this wretchedly hot and humid swamp ever get settled? God! Damn! It!

(Meanwhile, Anderson Cooper was most likely enjoying a Thai foot massage from George Clooney, whom he had gifted a new yacht in exchange for this service.)

And then evening would come and we’d have fun and forget for a while again.

Weeks after I considered Gustav mostly over, other than the piles of debris, blue tarps on roofs, and the young rescue dog we had acquired, I stood on line at Walgreen’s. I overheard an African-American woman, who I assumed to be from the north side of town, the area I got regular warnings to avoid. Three weeks or so after the storm, her house still had no power.

I was not the biggest fan of my temporary city of residence. But there’s something about the Gustav experience I could never shake: the national media came to report one story that never materialized, then they departed, willfully leaving behind a less glamorous story of suffering in an unpopular place. We were unimportant. When you’re living through a statewide disaster, it’s alienating when it doesn’t matter elsewhere. It was especially noticeable having moved there from a borough where every micro-trend merits an eventual mention in the New York Times. And so something shifted. I began to understand why some Southerners resent the Yankees, even among the many Southerners who are not, like my block captain, re-enacters of the “War of Northern Aggression.” I began to feel like one of them.

I haven’t seen my home and my people quite the same since. A friend from home later said, “Oh yeah, you had that hurricane or something, right?”

OR SOMETHING?! (And then I flashed back to my WHY DO PEOPLE LIVE HERE heat rage zone.)

Now I’m mindful when a far-off disaster gets a mention on the news. I also can’t help feeling a little more worldly than my Northern neighbors when there’s a hurricane warning and, as my friend Stefan put it, the Yanks are panicking like a coonass when it snows.

Colleen Kane is a writer and sometimes tweets helpful and/or disturbing messages into the ether. Check out her previous Brooklyn 2.0 columns here.