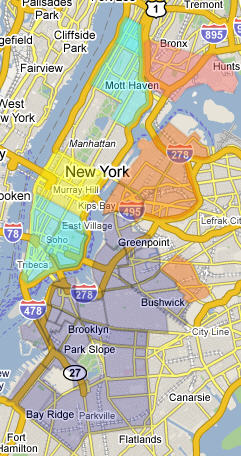 Today the NYPD arrested a suspect they say is connected to at least some of the sexual assaults that have occurred over the past six months in South Slope, Windsor Terrace and Sunset Park. Federico Chamorro Yax was charged with assault, sex abuse and forcible touching, and connected to three women who reported attacks. The most recent two identified Yax in a line-up after they were attacked, and fought off their assailant, early Sunday morning.

Any sigh of relief the community may be breathing is a tentative one at best. Police have not linked Yax to all of the attacks, and he does not match some of the descriptions given by other victims.

Until recently I lived in Sunset Park, and this series of assaults eradicated the sense of safety I once had in regards to my nocturnal travels.

I somehow convinced myself in college that walking alone at night was safe as long as I had a lit cigarette to protect me. Fortunately, I grew a brain, and have since sought out more practical safety precautions than a pack of Camel Lights.

As an adult, I’ve taken many a taxi trip or subway ride after hours and wound up walking at least a few blocks by myself to my apartment only to arrive home safe, sound and unscathed. Even a lifetime of watching Law & Order reruns couldn’t convince me to carry the pepper spray my older brother so lovingly gifted me for Christmas a couple years ago. It took something much closer to home to make me question my caution-to-the-wind comings and goings.

But the attacks in the South Slope and beyond rattled my sense of assurance, as I learned more about them in the course of researching Brooklyn’s Personal Safety Scene, an article about safety resources in Brooklyn and community reactions to string of assaults. Luckily, in my reporting, I also found out about Right Rides.

For women in the city, such as myself, Right Rides is like having a friend on call every Friday and Saturday night to make sure you get home safely. Pairs of volunteers–one of whom always identifies as female–offer free rides home for women and LBGQT individuals in cars donated by Zipcar. The details are outlined in the article, which also includes several other buddy-system services currently operating in Brooklyn.

When the time came to email founder Oraia Reid about setting up an interview, I couldn’t help but ask: “Is it possible to do a ride-along?”

I credit this impulsive inquiry to watching one too many episodes of COPS, though I’d heard the term used enough on primetime television too, to feel confident that it was indeed a real request made by reporters or at least the actors who portray them. I was surprised to receive a positive response from Oraia, and quick to take her up on her offer, which is how I wound up walking toward a car garage on 26th Street in Chelsea at 11:30 on a recent Saturday night. Though Right Rides is based out of Court Street in Brooklyn, it operates Zipcars from two garages in the city on the weekends: one in Manhattan and one in Brooklyn.

After walking past our meeting place once and awkwardly waving to a couple of women, who showed no signs that they were expecting me, I finally called Kristine Shook, one of the two volunteers I would be riding along with that night. The other volunteer, Rachel Morrison, was the only one among us who’d managed to arrive on time. After quick hellos, Rachel went inside to pick up our car, while I accompanied Kristine to a locked box inside the garage that contained three Right Rides’ messenger bags, one for each team operating out of Chelsea. That night we were the red team. Our bag contained clipboards, contact information and cell phones with which to log passenger pick-up information and keep in contact with the dispatcher delegating where to pick up riders.

Kristine, 33, and Rachel, 34, took to the idea of having a reporter along for the ride with aplomb. They are friends from high school in Detroit, Michigan, who now both live in Astoria, and volunteer once a month or so with Right Rides, so long as their schedules allow. Kristine, a bubbly blonde content to coordinate with the dispatcher and passengers, sat shotgun, while Rachel, the more reserved of the two, mustered up the nerves of steel necessary to navigate a car through New York traffic on a Saturday night. She stayed perfectly calm, no matter how many people walked out in front of our Volvo in the East Village.

It was the first night either one had used the new Android phones that Right Rides recently acquired to chat online with dispatchers, and as such, it took about a half hour of cruising around lower Manhattan before we received our first pick up at little after 12:30 am; plenty of time to question them about who uses Right Rides’ free service. I’d assumed it was a lot of intoxicated women wanting a free ride home; however, I was mistaken. According to Kristine, in the year or so since she and Rachel began volunteering for Right Rides, the two have only picked up a couple of people inebriated enough to raise eyebrows. The majority of the calls they respond to come from women working late who aren’t in a hurry to get home because it can take a while to get picked up.

“We can’t guarantee a pick up in five minutes of less,” Kristine explained. At most, Right Rides operates six cars on a given night, though there were only three out that evening, which is why when we got our first dispatch to a Starbucks on Wyckoff Avenue and Court Street in Cobble Hill, Kristine called the passenger, Alicia, to let her know it would be about 25 minutes and that there was a reporter on board. Alicia was okay with me accompanying her home under one condition: no pictures. As I’d forgotten my camera, this was an easy request to honor. It turned out Alicia was a Right Rides volunteer herself, which is how she’d heard about the service. As Rachel steered the car toward Clinton Hill, Alicia and I began discussing the recent slew of sexual attacks occurring in the borough. Petite and white with a bird-like bone structure, I couldn’t help thinking about how much she fit the description of women being targeted a few neighborhoods away from her own as recently as September 21.

Alicia herself had survived an attack in the past, which eventually led her to volunteering with organizations such as Right Rides, as part of her healing process. She is also a crisis counselor for the Rape, Abuse and Incest National Network better known as RAINN.

“What I love about Right Rides is that its preventative,” she explained. “It’s so much harder after something happens with all the healing that has to take place.”

Sitting in the car with Alicia and Kristine, who’d survived a mugging in London years ago thanks to a strong set of lungs, I felt fortunate that the worst I’ve encountered coming home have been uncooperative cab drivers and extra fares. When Rachel and Kristine offered to drop me off at home in Fort Greene on their way back to the city, I quickly acquiesced not wanting to chance a trip home from Chelsea so late.

As with all their riders, the two dropped me off at my door and stayed to make sure I got inside okay, which is more than I can say for most cabbies. I thanked them both for their trouble and took a mental note to store Right Rides’ number in my cell phone, having found a stronger appreciation for arriving home safe, sound and unscathed, if you don’t count stepping in dog excrement as I opened the car door.