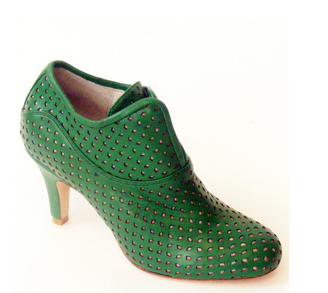 Sometime during the late 15th century, the word “cobble” came to indicate a clumsy repair job. This derogatory connotation deepened the divide between cobblers, those who worked with old leather to repair shoes, and cordwainers, those who fashioned new footwear with fresh and pliable leather. As any modern day cordwainer can tell you, the process of making a shoe has become even more fragmented post-Industrial Revolution. The creative process begins with a design concept and often ends not with meticulous attention to detail, but with large-scale manufacturing far from where the operation began.

It may be unsurprising to learn that there are a number of designers producing shoes in Brooklyn, where we handmake everything from salt water taffy to soap, who are countering the trend toward industrialization. These shoemakers are part of what Keiko Hirosue of k* Shoes says is, “like a knitting circle, a shoe circle” of entrepreneurs who specialize in the art of making feet look good and feel even better. 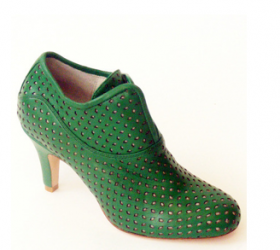 The Glory Oxford from k* shoes.

Keiko Hirosue, k* Shoes
“The beginning was, selfishly enough, designing for myself, and making for myself,” designer Keiko Hirosue explained. With Emily Putterman, a shoemaker and teacher at FIT for a muse, Hirosue got her start in 2003 teaching shoemaking at Brooklyn Artists Gym in Gowanus. She found that designing shoes for others was more challenging than designing and constructing them for herself. “After all, if it’s for myself, I can close my eyes to some mistakes, but it should be flawless if I want to sell them,” she said. Hirosue’s vivid women’s styles, which she say have been inspired by farmers markets and apple picking, range from flats to boots to wedge sandals. Their bright hues have caught the attention of celebrities like Gabrielle Union of Bring It On fame, who was spotted on the red carpet wearing the yellow Glory Bootie with a black miniskirt.

When she first got started, k* Shoes were designed locally and then outsourced. “With the contacts [I had] and the timing of things, I started to sample and produce in China,” Hirosue explained. The quality of the production was not a high as Hirosue had hoped, and she was paying seven to eight times the price that large manufacturers pay to have their shoes produced. She now works with a team of manufacturers in New York, which has condensed the process of pattern making, cutting and sewing material, lasting (or shaping), and soling to ten to twenty hours per pair, plus one night to allow the shoes to sit (she was spending 30 per pair to create samples to send to China for production).

Hirosue is also in the process of forming an incubator for start-up shoe designers to collaborate, show and sell together. As the project expands she envisions Brooklyn becoming a go-to destination for shoe designers who embrace her philosophy that, “If I can’t find it, then I have to make it!”

k* Shoes are available online in very limited sizes. Hirosue is currently between collections, but is planning to start selling her new collection early next year, online and at local stores like Shoe Market in Williamsburg, which has carried her shoes in the past. And, for bargain hunters, Hirosue sold her leftover stock from the year to Daffy’s, so you may be able to track down a pair or two, at steep discounts. 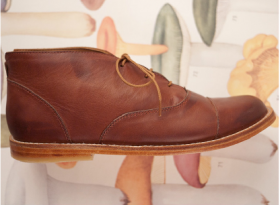 Ariana Bohling
With a penchant for gadgetry–and for growing her business–Ariana Bohling develops glossy leather into boots and sandals for women, that are begging to be worn by backpackers and fashion freaks alike. “I really like hardware stores, industrial workshops, and machinery,” said the designer, whose handiwork can be purchased in Boston, Los Angeles, Seattle, Manhattan, and Brooklyn but are made strictly in New York and at a small shop in Peru that Bohling has developed a partnership with.

Though it may seem counterintuitive for a local shoemaker, Bohling embraces the mechanization of the trade. “Shoe designers are building shoes,” she said, explaining her fascination with footwear as opposed to other apparel. “I like the fact that you need a hammer, nails, glue, leather, sanding machines, et cetera to physically make a shoe.” Bohling begins building a shoe with a broad concept in mind, then fills in the storyboard with her selection of materials, and then with the construction in a design process that takes two to four months. Several other Brooklyn designers have collaborated with Bohling in the past, in various steps of this process, and she echoes Hirosue in claiming the collaborative nature of the industry, at least in New York, as a source of creative affirmation. “No matter how industrialized the shoe making process becomes, there will always be hands involved in making that shoe,” she said.  And, it’s likely those hands will be involved again in new projects down the line.

Ariana Bohling shoes are available in Brooklyn at Steven Alan on Atlantic Avenue, Jumelle in Williamsburg, and Stuart & Wright in Fort Greene. 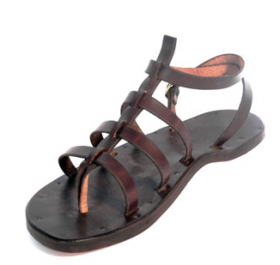 The gladiator sandal from Kika NY.

Kika Vliegenthart, Kika NY
“As a kid, I was crazy fascinated by shoes,” confesses Kika Vliegenthart of Kika NY, a Brooklyn-based sandal and accessory maker. “I couldn’t believe that one day, it would be possible to make my own shoe that I could wear.” After a stint at film school, Vliegenthart actualized these dreams when she strolled into Barbara Shaum’s leatherwork shop in the East Village. Shaum, a leatherworker in New York since 1954, and one of the rock stars of the handmade shoe scene, turned down Vliegenthart’s offer to work for free. So she showed up the next day to unabashedly offer again. As a result of her persistence, Vliegenthart began a mentorship with Shaum, and went on to create her own style, using the expression and movement of the human foot for inspiration. “As a woman, I never liked women’s shoes. My shoes are not feminine but very elegant,” she said. “Feet move, so my shoes are made for motion, which is wonderful.”

While working in Europe, Vliegenthart met her wife Sabine Spanjer, got married, and moved back to New York to cultivate her designs for men and women. Kika NY began selling shoes locally and internationally. The space and freedom of of Brooklyn, however, keep Vliegenthart based in the borough, designing her ever-expanding line. Belts, wallets, suspenders, bags, and even laptop covers round out the finely-tooled leather products she handcrafts.

Kika NY is currently selling leather goods at Deck the Halls, a pop-up flea market in Nolita; sandals can be ordered online, and can be customized to your foot–in the detailed instructions you are prompted to trace the outline of your foot and send it to Vliengenthart’s Brooklyn studio.