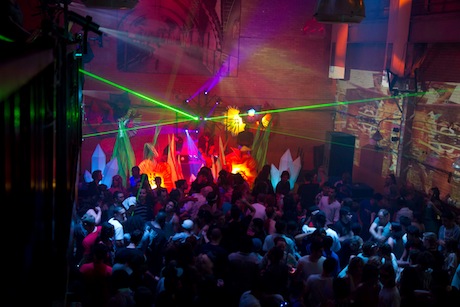 UPDATE: Check out these spectacular ways to ring in 2013

Just another night at The Electric Warehouse (photo by Maximus Comissar)

If your New Year’s Eve dream party includes costumes, dancing, and an undisclosed locale,  we asked Oriana Leckert, who has made it her job to check out every great under-the-radar and popular venue and party in Brooklyn, to suggest a few. The freelance book editor launched her site, Brooklyn Spaces, earlier this year because she was amazed that for every cool new DIY venue she found, “another was getting shut down, or burned down, or flooded, or evicted.”

Determined to preserve more than the memory of these places and the parties they housed, Leckert has been documenting each space online since February, with the intention of one day turning her photographic archive into a book. Her definition of spaces has since expanded a bit, but her rules for inclusion are simple: “If I want to cover it, I do…but the spaces I’m most interested in are the ones that are art for the sake of art, spectacle for the sake of spectacle. Anyone can get a keg and throw a house party, but I’m most fascinated by the people who just go crazy with it, covering the walls with insane decorations, picking exotic themes, serving intricate meals, pairing musical acts with burlesque performers and fire dancers and contortionists.”

Given that a few popular parties, like Gemini & Scorpio’s Glitter Ball, are already oversold, below are Leckert’s top picks for an underground Brooklyn New Year’s Eve. None are sold out (yet). And for year-round event inspiration from Leckert, sign up for her newsletter and follow her on Twitter and Facebook.

Electric Circus at the Electric Warehouse
1428 Fulton Street at Tompkins Ave, Bed-Stuy
9 pm, $35, tickets
Unicorn Meat NYC are throwing their most ambitious event yet, with a surprisingly low NYE price tag.  Their take: “We believe a good party is like a story you can dream your way through. This is a full-on immersive experience with different types of visually and musically diverse environments and the best performers we can afford.” The eleven-hour party will have two floors of installations and art, fifteen different bands and DJs (Nigel Richards, Hobotech, Joro Boro, Arrow Chrome, MUN, and more), seventeen exotic performers (trapezists, stilt-walkers, ballerinas, contortionists, aerialists, acrobats, firedancers), Oompa Loompas serving tea, and a real unicorn. Costumes encouraged. 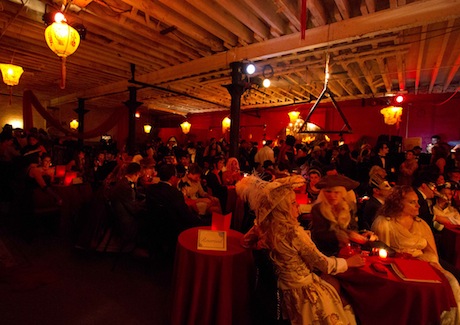 Shanghai Mermaid at the Red Lotus Room
Crown Heights
9 pm, $50–$75, tickets
Easily the most immersive party in the Brooklyn underground scene, Shanghai Mermaid is a riot of feathers, ruffles, sequins, and fringe. The mostly-monthly soiree is generally themed around a decade and a city, but for New Year’s it’s a mix: plan your costume (no one admitted in street clothes) around 1930s Paris, Berlin, Shanghai, New Orleans, or New York. In addition to gawking at other attendees’ spectacular attire, relax on red velvet couches and enjoy cabaret performances all night long (burlesque, aerial, contortion, and fire-spinning are standard fare), interspersed with period bands and DJs. 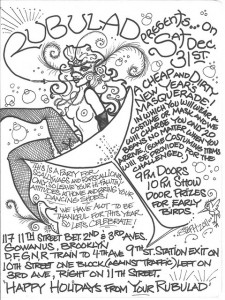 Rubulad NYE
117 11th Street between 2nd and 3rd Aves, Gowanus
9pm doors, 10pm show
$20 at the door
Fresh off their successful Kickstarter campaign, Brooklyn’s longest-running underground art-party-throwers bring you a reasonably priced, down and dirty bash. In their words: “This is a party for scallywags and rapscallions only, so leave your hi-falutin’ attitudes at home and bring your dancing shoes!” Wear a costume, or at least a mask, and dance the night away to DJs ($mall ¢hange, DJ Shakey, DJ Soundman Cody) and bands (The Drunkard’s Wife, Friend Roulette, Hungry March Band). Bastard Keith will host, and there will also be delights like puppet burlesque, nonstop films, a light circus, and truck fun from the Lost Horizon Night Market.

Time’s Up 12th annual NYE Bike Ride
Meet either on the Brooklyn side of the Williamsburg Bridge or in Washington Square Park
10 pm, no cover
Bike to Belvedere Castle in Central Park for an outdoor dance party and fireworks.

For more ways to ring in 2012, check out this week’s Tip Sheet