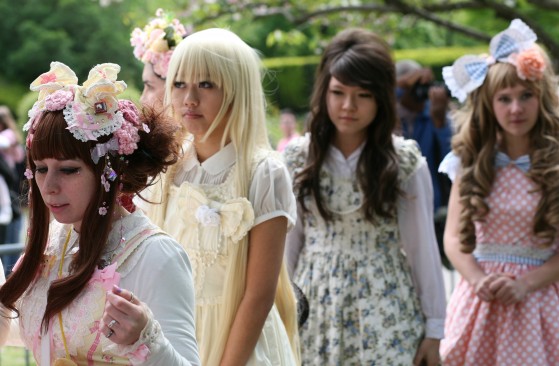 The BBG Parasol Society on parade

I spent a summer in Japan growing up and still count my time there amongst my fondest memories. Even then, I found the juxtaposition of old and new Japanese styles displayed on streets in cities such as Tokyo and Kyoto especially interesting. Japan’s  food, culture and of course fashion are unlike anywhere else in the world. So when I checked the tip sheet last week and saw the Sakura Matsuri Festival, a celebration of traditional and contemporary Japanese culture, was taking place this past weekend at the Brooklyn Botanic Garden, it brought back a flood of flashbacks from my time overseas, and I decided to take a trip down memory lane by testing it out. 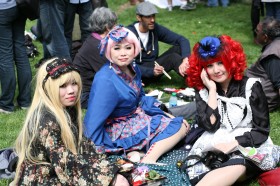 Even though the cherry trees had lost most of their blooms by the time the festival started Saturday morning thanks to an unseasonably warm March, Sakura Matsuri–Japanese for “cherry blossom festival”– is still considered the grand finale of cherry blossom season.  The last few of the pink flowers were already falling like confetti from the trees by the time attendees started arriving; however the throngs of people streaming through the festival Saturday and Sunday still had plenty to look at. Fashion was in full bloom, even if the flowers were not.

The sun hand finally began shining by the time I got to the botanic garden Saturday afternoon, and several people were buying paper parosols for $8 outside the entrance to shade themselves. The sun blockers, which looked like oversized cocktail umbrellas, added polka dots of color to the crowd. 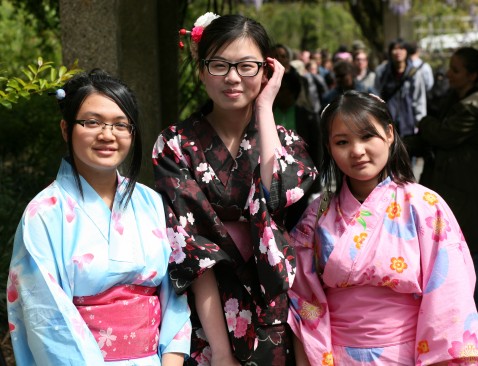 Blooming cherry blossoms could still be found on kimonos

I came across my first kimonos walking down the lilac-tree-lined path to the Cherry Esplandade, an open expanse of acreage in the center of the botanic garden lined by double rows of cherry blossom trees that serves at the central focus of the festival. They were being worn by a trio of Japanese teenagers dressed in traditional attire–kimono robes and obi (the traditional sashes used to close kimonos)–who were kind enough to pose for a picture. As I made my way farther through the festival, I began to see other types of Japanese street fashion crop up in the crowd, such as anime-influenced outfits, ultra-girly Lolita looks and Harujuku Girl clothing Gwen Stefani would have appreciated. 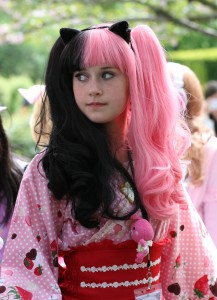 Fashion was still in full bloom at the Sakura Matsuri Festival

Nothing however compared to the BBG Parasol Society, whose members were outfitted in the type of Japanese street style not often seen outside of the country itself. Two dozen or so of its members were corralled outside the main stage at the Cherry Esplandade waiting to take their turns on the catwalk as part of a fashion show. Most were wearing frilly baby doll dresses or full skirts and petticoats in an array of pastel colors and patterns with ribbons and bows finished off with knee-high socks. Some had even imported their outfits from Japan where this street style, known as a Lolita Fashion, is extremely popular among the countries youth culture.

My romance with all things Japanese rekindled, I grabbed a bushel of lilacs at the Fort Greene Farmers Market on my way back home, ordered yaki soba noodles for dinner and spent the rest of the evening watching a marathon of Hayao Miyazaki movies and perfecting my top knot.