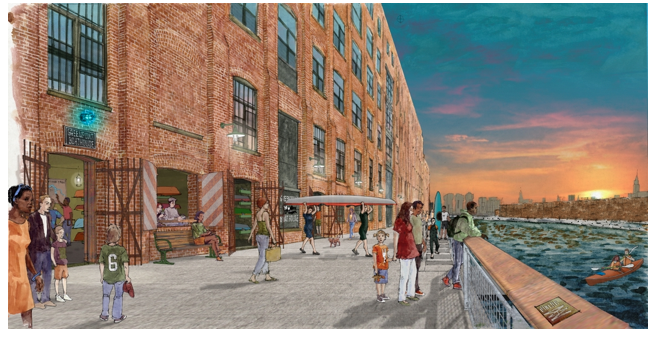 A rusted old barge that has been stuck in Dutch Kills for over 20 years.

A view of the water from the 49th Avenue Bridge in Long Island City, Queens.

Industry along the Newtown Creek, from Long Island City.

Newtown Creek as seen from the Greenpoint Avenue Bridge.

Words of caution at the Newtown Creek Nature Walk.

A rendering of the proposed boathouse and esplanade.

The end of Manhattan Avenue in Greenpoint marks the northern tip of Brooklyn, a spot on Newtown Creek with a magnificent view of the Manhattan skyline. It’s prime waterfront real estate that residents and visitors would surely take advantage of, if only they could get to it–and if it wasn’t quite so polluted.

Industrial rubble and fences litter the banks of the creek, and the water itself is a soup of chemicals and bacteria. The scene is the result of an industrial legacy that spans more than two centuries, during which conservation took a distant back seat to economic development. Recent legal battles over pollution, and two sizable settlements, have inspired plans to revitalize Newtown Creek, starting with a community boathouse and creekfront esplanade.

Community advocates want to reclaim Newtown Creek by constructing a boathouse in the ground floor of the Greenpoint Manufacturing and Design Center (GMDC). The project would also include a repaired bulkhead and an esplanade along the waterfront. For boaters and the kayak-curious, it will mean storage space for non-motorized watercrafts and a training center for recreational boating. For all other visitors, it will provide a place to enjoy the waterfront, as the development would create a public gathering spot that is more of a park than a club.

If all goes according to plan, Greenpoint will have this new waterfront park by 2014.

The larger goal, according to the North Brooklyn Boat Club’s proposal, is to expand public open space, assist in the GMDC’s mission to retain and create new local jobs and create an educational facility for studying the creek and the surrounding area.  It would also develop the northernmost piece of a waterfront public esplanade, which would eventually go from Manhattan Avenue Street End Park all the way down to South Williamsburg.

Dewey Thompson, president of the North Brooklyn Boat Club, was one of the first in the community to lobby for the project. “I always had an interest in trying to open up the waterways to community access,” he says.

Yet developing green spaces in North Brooklyn continues to be an uphill battle. Plans for a park at the Transportation Authority site on Commercial Street have been delayed indefinitely. The spot currently provides storage for MTA buses and emergency vehicles, and the Department of Transportation will not allow the MTA to relocate them to a city-owned site under the Williamsburg Bridge.

Brian Coleman, president of the GMDC, says that under these circumstances, the 374 feet of waterfront park that the boathouse project would provide are especially vital. “I see the extension of the park as a great opportunity for the Greenpoint community to take advantage of a relatively small amount of open space, particularly open space with access to the waterfront,” Coleman says.

The banks of the Newtown Creek were home to the country’s first kerosene and oil refineries, and by the end of the 19th century Standard Oil had more than 100 distilleries on either side of the waterway.  There was little government regulation or oversight until relatively recently, leaving the area with the remnants of underground oil spills, hydrogen sulfide and undissolved oxygen, garbage and old tires.

As part of an agreement to bring the Newtown Creek Wastewater Treatment Plant up to code in 2008, the New York State Department of Environmental Conservation (DEC) allocated $10 million dollars to environmental benefit projects.

“When I heard about the money and the very narrow definition of where it could go, I had this idea that the GMDC building would be a great place for a community boathouse,” said Thompson, the boat club president.

The City Parks Foundation (CPF) is in charge of administering $7 million of those funds, from which the boathouse project, with a projected budget of $3 to $5 million, will receive its share. CPF will keep 10 percent for administrative costs, a $700,000 cut. The Hudson River Foundation was allotted $1 million, and the remaining $2 million originally went to the New York State Energy Research and Development Authority.  This was later redirected, and will now be administered by both the CPF and Hudson River Foundation.

A second pollution settlement was reached with Exxon Mobil in 2010. Promising $19.5 million to correct damage stemming from more than 2000 oil spills that polluted the Newtown Creek and surrounding areas over the years, the distribution of the settlement funds is in the infant stages. The money will be dispersed once an agency is assigned to handle the process, and then projects will be selected to receive funding.

After the first settlement was reached, the DEC reviewed community-proposed projects, which were required to meet specific environmental criteria such as installing green infrastructure, creating or improving open space and creating ecological stewardship through educational programs. Residents of Greenpoint, Maspeth, Long Island City and Blissville, the four communities most affected by the treatment plant, were invited to vote on several dozen of those projects. The DEC used that public input to decide which projects to fund.

Though the GMDC does not yet have cash in hand to start building, of all the projects in play the boathouse has the most traction. The number-two contender is a park in Dutch Kills, across the creek in Queens, a prospect that has been stalled because the landowner has not agreed to sell. Hot on its heels is a phytoremediation project, which would use floating plants to naturally remove contaminants in Newtown Creek.  Sarah Durand, an associate professor of natural science at LaGuardia Community College, is leading the phytoremediation charge.

For now, with the boathouse and esplanade at least a year-and-a-half away from completion, the best way to explore the waterway is with the Newtown Creek Alliance’s resident historian Mitch Waxman. He guides tours along the creek, educating visitors about the thriving industrial engine that laid waste to the natural environment.  The tour winds through the railways and warehouses of Long Island City, over the Greenpoint Avenue Bridge and through the Newtown Creek Nature Walk, a walled path that resembles the inside of a ship. It concludes on concrete steps that descend into the creek, with a dramatic view of the Manhattan skyline beyond.

On a recent Saturday tour, Waxman posed with tall buildings in the far background, industrial flotsam and jetsam surround him, and stopped to make a dramatic connection between the gleaming skyscrapers and the filthy water.

“The cost of that city of towers is Newtown Creek,” he said, shaking his finger at Manhattan.  “You don’t get to have that without this.”

Leave a Reply to Shannon Firth