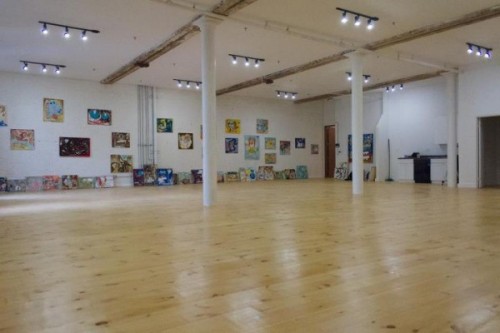 Next Thursday, August 16, we’d like to invite you to our “office”–the shared workspace Bitmap Creative Labs, and its brand-new offshoot, Syndicate Gallery at 175 Powers St. in Williambsurg, for an art opening, Brooklyn Brewery beer and snacks from Mesa Coyoacan.

Bitmap is where we broke our home office habit this summer. After years of g chatting throughout the day from our apartments, we discovered it’s far more productive to work side by side. It’s also easier to conduct business–instead of meeting with each other and potential collaborators in a coffee shop, we can actually sit in a quiet conference room. And considering the creative folks at Bitmap–which was founded by Nick Robalik, the Principal/CCO of New York creative firm HERO and is filled with designers, developers, architects, animators, and motionographers–working there means that a conversation with a stranger by the coffee pot could lead to an exciting project together.

Right now, Bitmap has a very cool project that we are excited about: they are doubling their Graham Ave. office size. Initially it will be called Syndicate Gallery and will showcase visual art. When it opens on Thursday, August 16, it will feature the prolific, six-month painting project of up-and-coming artist Nitzan Salomon, who has been the driving force behind the Gallery portion of event. When it’s built out, it will mean more desks and more room for classes, like primers on copyright law, for those working in creative industries. Bitmap just launched a campaign on Smallknot to make this possible–contribute to it, and you’ll get to enjoy the space as we have.

Even if you don’t intend to work at Bitmap, come join us at the art opening on Thursday from 7 to 11pm, and schmooze with other bloggers, designers, and artists. We’ll have cold Brooklyn Brewery beers for you, and delicious Mexican fare from Mesa Coyoacan. RSVP on Facebook for directions and to let us know you’re coming.