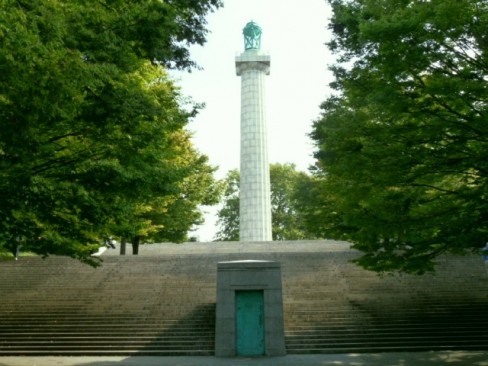 Tomorrow morning at Fort Greene Park, amidst the farmers market, games of fetch and soccer scrimmages that are sure to be happening, another timeworn tradition will also take place–one that dates all the way back to 1908.

Saturday at 10am, members of The Society of Old Brooklynites, a club founded by well-to-do Brooklynites back in 1880, will gather around the base of the Prison Ship Martyrs monument to pay their respects for the 104th time. The monument is a tribute to to the 11,500 American colonists who died aboard British ships during the American Revolutionary War. The remains of some of these men and women are actually interred 40 feet below Fort Greene Park’s surface.

“Their bones were scooped up from Wallabout Bay along the shoreline there where the waves had exposed them after a while, and they were put into this crypt in Fort Greene Park,” says Ted General, a member of The Society of Old Brooklynites, which has hosted an annual memorial for the martyrs every year since President Taft dedicated the monument in 1908.

Membership in The Society of Old Brooklynites is open to anyone who has lived or worked in Brooklyn for at least 25 years.

The tribute includes a maritime piping ceremony, in which the names of the prison ships are read aloud to musical accompaniment. An invocation from historian Susan DeMark will follow, as well as an interpretive dance performance, a trumpeting of “Taps” and an operatic selection.

Fort Greene Park is actually the largest American Revolution burial ground in the nation, and perhaps one of Brooklyn least known history lessons—as well as the final resting place of thousands of the city’s most patriotic people.

“To get off the ships, all they had to do was swear allegiance to the British Crown, and they absolutely refused to do it, so a lot of them died aboard those ships,” General says. “It’s crazy to think that all this is in a public park. Fort Greene Park has a lot of history surrounding it.”