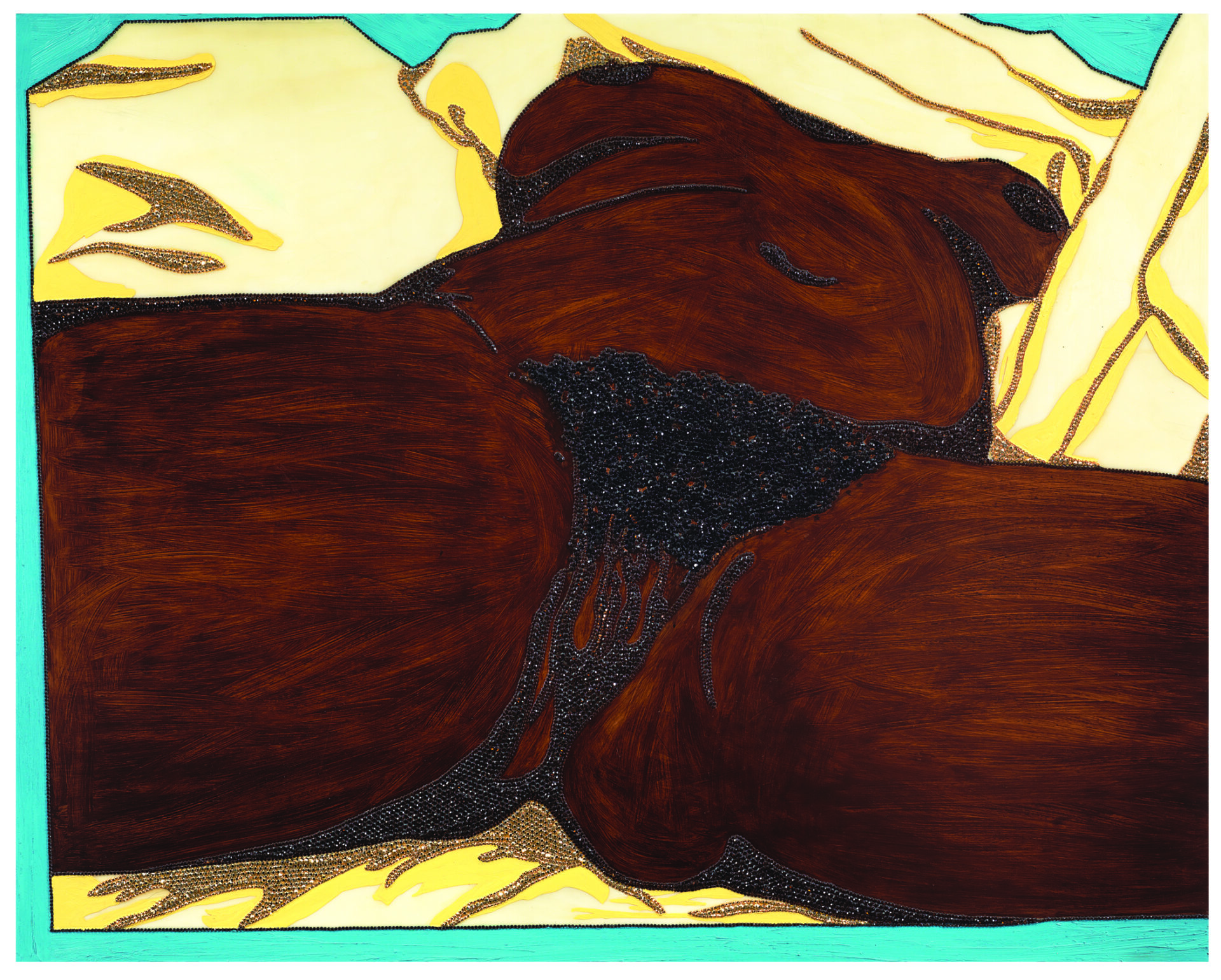 The French impressionists would never know what hit them if they were around long enough to see Mickalene Thomas’s reworkings of Gustave Courbet’s “L’Origine du monde“ (1866). The nude women in “Origin of the Universe 1” and “Origin of the Universe 2” (2012) form the title of Thomas’s first solo show at the Brooklyn Museum, which is more like a state of the union than a retrospective. Now open through January 20, the exhibit concentrates mostly on Thomas’s paintings, collages and photographs from the past two years, which incorporate influences from landscape painting, impressionism, portraiture and interiors to examine contemporary issues of gender and race.

Thomas is more than sum of her inspirations, however; she’s mastered the older rules well enough to be able to break them. Often the paintings add African-American women to a scene that is traditionally remembered as having no women at all, or a seemingly faceless white woman, as in “Le Dejeuner sur l’herbe: Les Trois Femmes Noires, Fractured” (2011), Thomas’s interpretation of Manet’s “Le Dejeuner sur l’herbe.” The reworking opens the possibility of the two paintings, and really history, to have a conversation with each other, and tweak the nineteenth century painting scenario which usually involved the woman as subject, and the man as the brilliant visionary painter. In Thomas’s work, the woman may seem to be the subject, but the look on her face reveals she’s running the show.

This exhibit also allows us to see Thomas’s process, to see a work through various stages, including photographs, paintings, and collages. The paintings are often emblazoned with rhinestones and sequins, in addition to enamel, and colorful acrylics, as in “Qusuquzah Une Tres Belle Negresse” (2012), which begins with a photograph of the subject unsmiling, in front of a staircase. In its painting incarnation, everything is more prominent; her eyes and lips and nose, even her posture. The photographs and collages don’t feel like mere drafts, but like an opportunity to see the work that accompanies inspiration.

While the rhinestones and other embellishments may seem garish or distracting at first, there’s a refreshing defiance in the way they say–or really demand–“Look at me.” Whether they are smeared across the subject’s lips, or tightly and sharply applied to define the borders of a landscape or the leaves of a tree, they’re often startling, but always effective. Thomas is not only reinterpreting the work of French of 19th Century painters, but also allowing the viewers to reconsider the power of the humble rhinestone. As for the subjects themselves, there may be a slight smirk or playfulness, as in the eyes and head tilt of the woman in “Din Une Très Belle Négresse 3” (2012), but strangely the emphasis that the rhinestones put on various body parts actually gives them their power. Thomas similarly reinterprets the positions of her portrait subjects, which in older paintings might have made the women look like victims, or at least emphasized the painter-subject power dynamic, with the painter firmly in control.

The same is true of “Mama Bush: One of a Kind” (2007), a portrait of Thomas’s mother as an odalisque. The reclining position is not one of weakness or submission, but in Bush’s eyes, secret strength. The brightness of the fabrics and furniture behind her, and most of Thomas’s subjects serve to highlight this vibrancy and strength. The thickness and smoothness of the acrylics, and the shapes of the flowers and patterns on the fabrics are pretty stiff competition for a person, but the inner strength of these women can stand up to even the most colorful of wallpaper.

These interiors, including an installation of Thomas’s studio, are the focus of the final room of the exhibition. While Thomas has the technical skills of an interior decorator–in her paintings she creates sofas and pillows so vivid you want to take a nap on one–the last room doesn’t have the same emotional pull as the rest of the exhibit. It’s technically impressive, just not emotionally so, perhaps because it lacks the human touch that the women in Thomas’s other paintings give to their surroundings.

Interiors aside, “Origin of the Universe” is impressive not only because of the content, but because of its timing with Thomas’s career and her rise through the art world. Now in her early forties, she simultaneously inhabits the tropes of a late bloomer and an overnight success, having come late to painting after originally setting out to be a lawyer. Once she decided on painting however, her success came fast. Thomas earned her MFA in painting from Yale in 2002, and made her gallery debut in Chicago in 2006, and New York in 2009. Now, three years later, she has a solo show at the Brooklyn Museum.

For another artist it might seem like too much too soon, but the power of the work in “Origin of the Universe” shows that Thomas is up to the challenge. This is not only an excellent exhibit, but also an excellent pairing of artist and institution. Thomas is a Brooklyn native, and her work reflects the brash energy of the borough.

Leave a Reply to Fan