Whether you plan on heading to your favorite bookstore and loading up on holiday gifts all in one go, or you just need some reading material to curl up on the couch with while sipping eggnog (or to lose yourself in during holiday travels), it’s been a great year for books. Here are a few favorites–for gifts or for yourself–from BB columnist, Jon Reiss. The list is mostly from the past year, by mostly Brooklyn authors. 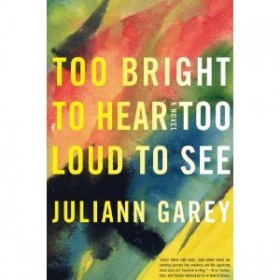 Too Bright To Hear to Loud To See by Julliann Garey, Soho Press
A Hollywood executive loses his mind in the most amusing possible way. If Chuck Palahniuk were a woman with an unassailable knack for encapsulating mental illness while also somehow managing to have some fun, Julliann Garey would but the end result.  Of all the fiction coming out around holiday time, this belongs at the top of any serious reader’s list.

Bobby’s Book as told to Emily Haas Davidson by Bob Powers with photos by Bruce Davidson, Seven Stories Press
Today, Bob Powers is a respected addiction counselor. Bobby’s Book offers his reflections on his drug-laden, gang-banging past, as told to Emily Davidson, the daughter of a photographer who once documented Powers’ life. This book makes for the perfect gift for any fan of the work of Eddie Little or Ed Bunker. With chapter titles like “Cocaine” and “Voted Most Likely to Be Dead Before Twenty One” Bobby’s Book may also serve as a reminder of how different the Brooklyn we live in once was. 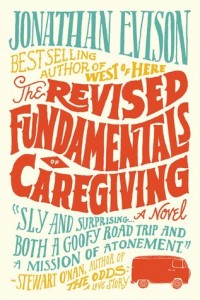 The Revised Fundamentals of Caregiving by Jonathan Evison, Algonquin Books
This out-of-the box, upliftingly weird road comedy feels like the 2012 equivalent of Everything is Illuminated. Not because the two books have similar plots or tones, but because this is the book that everyone is talking about right now. Evison’s novel has a flair that is distinctly modern, a book for this moment in time, that manages to be uplifting despite an onslaught of harrowing circumstance. The novel’s protagonist, a psychoanalyst, takes one of his patients on the road to try and understand the true responsibilities of caregiving.

Seven Days in Rio by Francis Levy, Two Dollar Radio
Levy’s literary voice has been compared to Sam Lipsyte’s but I tend to disagree. While this is indeed one of the funniest, most entertaining novels of the year, Levy strikes me more as a modern day Henry Miller with a touch of Dennis Cooper’s eloquence. It’s your favorite, dark and edgy writer with a lethal dose of funny thrown in the mix. Seven Days In Rio is a psychoanalytical sex romp through Rio that will help you get the poison out of your system without having to do anything self-destructive. This is one of the many books on this list from indie publisher Two Dollar Radio, which has also recently published the literary magazine, Frequencies. The debut issue features work by Anne Carson, Joshua Cohen and Blake Butler and makes one hell of literary stocking stuffer or Menorah level.

Damascus by Joshua Mohr, Two Dollar Radio
As a person who writes about the book world, I like to sometimes pretend that up-and-coming authors are horses and I am an old ornery man at the track placing bets on these horses. In that scenario, Joshua Mohr is my favorite horse, I call him Count Chocula, and he’s poised take first in the Kentucky Derby of the literary world. In all seriousness, Mohr is a name that I believe will soon be on the lips of not just fiction enthusiasts, but the greater reading public at large. Damascus is the perfect entree into his work, as it tells the tale of multiple characters in different walks of life, all trying to find some kind meaning in their Bay Area existence. Be it by caring for pet snakes, nailing fish to the walls of a bar or dressing as Santa Claus year round, the characters of Damascus are constantly reaching out to connect.  Mohr’s style is accessible for any kind of reader, yet exciting and dangerous a la Charles Bukowski or Bret Easton Ellis. He’s the type of author likely to get a young person excited about reading and Damasucs will perfectly prepare you for the release of Mohr’s new book, Fight Song, in February. Check out my review  on Vol.1 Brooklyn for more.

Nine Months by Paula Bomer, Soho Press
I’ve raved about this book on Brooklyn Based quite a bit in the past few months, and even have fellow staff hooked on its darkly comic charms, and therefore it would be crazy to leave it off the list. A Carroll Gardens mother accidentally becomes pregnant with her third child, freaks out, runs away for a spell, and even has some hot sex on the road.  It’s a funny, exceptionally non-sentimental window in pregnancy, and motherhood. 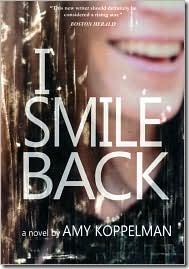 I Smile Back by Amy Koppelman, Two Dollar Radio
I Smile Back is a middle-class mother’s harrowing journey to re-assimilate from soul-crushing despair in a way that feels akin to a soldier returning from war.  Going through a William Burroughs-style journey of sex, drugs and insanity, Koppelman’s novel will keep any reader cringing and turning pages until the novel’s end. Koppelman writes beautiful sentences. She describes a woman’s descent so viscerally it will put your experience reading A Million Little Pieces to shame.

Accelerated by Bronwen Hruska, Pegasus Books
Browen Hruska’s debut novel is the perfect gift for parents dealing with the seemingly earth-shattering decision about where to send their child for school.  Though I’ve not experienced this personally, I’ve observed it first-hand and seen how something that might seem status quo to others feels life altering to parents. Hruska’s book takes the kind of high-octane feelings that often surround this venture and personifies them into a thrilling journey of cover-ups and conspiracy. It’s a private school thriller you won’t be able to put down (even if you don’t take focus meds). 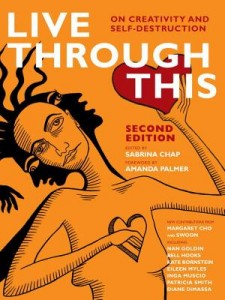 Live Through This: On Creativity and Self Destruction, edited by Sabrina Chap, foreword by Amanda Palmer, Seven Stories Press
This is a really cool book.  In fact, if I were to update my Books On Writing Worth Reading list, this would absolutely be included.  Though it’s not entirely about writing, it is about the creative process and all of its foibles.  The introduction by Amanda Palmer wherein she recounts her husband Neil Gaiman’s observation that the most well adjusted writers he knows are the gruesome horror writers, is worth reading many times over.  The book also includes contributions from Margaret Cho, Nan Goldin, bell hooks, Eileen Myles and more. 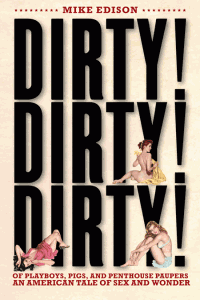 Dirty! Dirty! Dirty! by Mike Edison, Soft Skull Press
Mike Edison is New York’s patron saint of punk rock and porn writing. His last book I Have Fun Everywhere I Go was, cover-to-cover, one of the most entertaining books I’ve ever read. Edison seems to live by a directive that I truly admire–write about what is fascinating.  In Dirty! Dirty! Dirty! he does just that by sketching out the history of each of the holy quartet of the dirty magazine world: Hustler, Penthouse, Playboy and Screw. With appearances from icons like John Lennon and Lenny Bruce, Edison has managed to produce another book of tales that is truly difficult to shove a bookmark in.  Along with Sexytime, this book could make the perfect gift for that special perv in your life.

Shitty Mom: The Parenting Guide for the Rest of Us by Laurie Kilmartin, Karen Moline, Alicia Ybrarbo and Mary Ann Zoeliner, Abrams Image
There seems to be a new trend toward frankness when it comes to parenting, perhaps set off by the popularity of Go the Fuck to Sleep. This book functions as something as a travel guide for the new or expecting parent, written by a team of witty comediennes.  With chapters like “How Not to Let You Kid Become a PDA-Hole” and “How to Leave Your Baby in The Car While You Dash into a 7-11” Shitty Mom is both funny and practical and it comes complete with a quiz to find out if you are indeed a “shitty mom.” 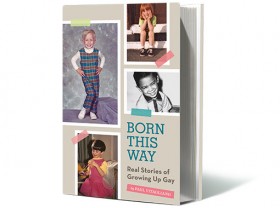 Born This Way: Real Stories of Growing Up Gay by Paul Vitgliano, Quirk Books
As a rule, blogs that become books are annoying. They make you look up to the heavens and ask “why?” But this book to blog is an absolute exception, complete with stories of same-sex dating from the 1940s to the present as well as funny and often-heartbreaking stories of growing up gay. It’s a vibrant book that makes a great uplifting gift for anyone who ever felt like an outcast growing up.

Invisible Murder by Lene Kaaberbol and Agnete Friis, Soho Press
The consensus seems to be that this book, along with The Boy in the Suitcase, is the new Girl with the Dragon Tattoo.  Is it because both of them are Nordic crime thrillers? Perhaps, but in both novels there’s a sense of cultural tourism that feels more prevalent in this series, as well a more Orwellian critique of social injustice. Invisible Murder is a crime book that the more literary among us can also enjoy.

We Got Power by David Markey and Jordan Schwartz, Bazillion Points Books
For the punk rock enthusiast, the music nerd, or the friend who is too cool for any gift you can think up, We Got Power is the perfect book.  It’s the one punk rock history that is not a coffee table book or a narrative music history book but both. Instead of keeping with the trend of oral history music books, it simply puts some of punk and hardcore’s greatest legends to work, writing essays about one of the most influential music movements of the last century.  Including essays by Henry Rollins, Chuck Dukowski, Pat Fear, Keith Morris, Mike Watt and more, this book is like a Richard Hell, Jim Carrol or Joe Meno novel wrapped into the perfect punk rock coffee table book. In other words, this capsule review should be the equivalent of a person screaming at you, over and over again, “Buy this!“

Two more from the BB editors: 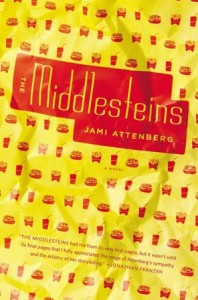 The Middlesteins by Jami Attenberg, Grand Central Publishing
We are, in general, a fatist society. When face-to-face with the morbidly obsese, we tend to look away. But in Jami Attenberg’s The Middlesteins–considered to be her breakout book–she gives us a glimpse of what it feels like to truly bury yourself in food, and it was hard to peel myself away from the page. Edie Middlestein, a seriously overweight mother, is the central figure of this Jewish family in Chicagoland that has been shaped by her bottomless appetite. The chapters alternate perspectives among the family members–a narrative trick that is very satisfying to my digital-age brain–and hop around Edie’s life as she fluctuates in weight (Edie, 202 Pounds. Edie, 160 Pounds). The father who leaves Edie and starts online dating, the daughter-in-law who takes all of the fat, salt and joy out of her own dinners, the alcoholic daughter and sullen granddaughter–they are all as engrossing as Attenberg’s sympathetic, three-dimensional portrayal of Edie’s life of eating.–N.D.

Laura Lamont’s Life in Pictures by Emma Straub, Riverhead Books
This is a classic American story about leaving your small town behind, making it big and discovering that you can’t go back home again, but that you can build a new and surprising home of your own. Painstakingly researched, Laura Lamont is studded with exquisite details about life in the Hollywood studio system from the first half of the 20th century. There’s something a little McMurtry in the way that Straub writes about Hollywood melancholia in this lovely novel. My mom and my nana are both getting a copy this Christmas. –A.G.