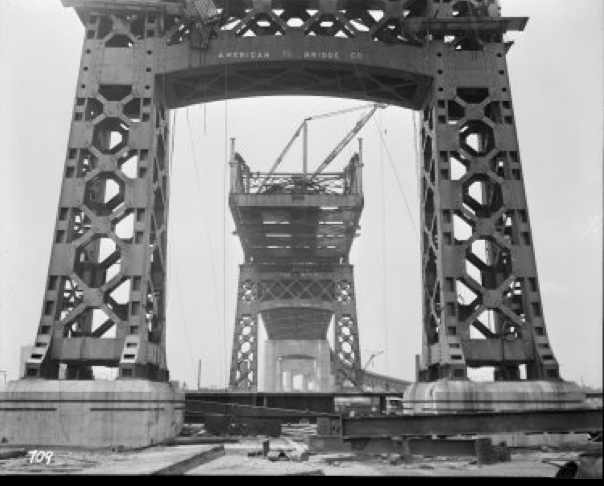 A view during construction during the 1930s. Photo: NYC Department of Records

Widely dreaded for its gridlock traffic, infrequently loved for its colossal steel form, the Kosciuszko Bridge, a more than 70-year-old icon of Brooklyn’s infrastructure, will soon disappear from its towering arc over Newtown Creek. The looming demolition [construction on the new bridge will start in the spring, demolition will not begin until the new bridge is completed] will make way for a new Brooklyn-to-Queens link that will keep the old bridge’s often befuddling and widely mispronounced name (“Ka-SCHUSH-ko”), a tribute to one of Poland’s most celebrated national heroes that was made at a time when that country itself was invaded, divided, and annexed.

The bridge opened as the Meeker Avenue Bridge on August 23, 1939, but in July of 1940 it was renamed after Tadeusz Kościuszko, a hero of the American Revolutionary War. At that moment, the Nazis and Soviets controlled Poland in the ongoing world war. According to the New York Times, the state attorney general John J. Bennett Jr. said to a mostly Polish crowd of 15,000 at the dedication: “The Polish people may be captive, but the flaming spirit of Polish liberty will never be destroyed.” A plaque from the dedication is mounted in the center of the bridge and two metal eagles perch on its towers, one American and one Polish. 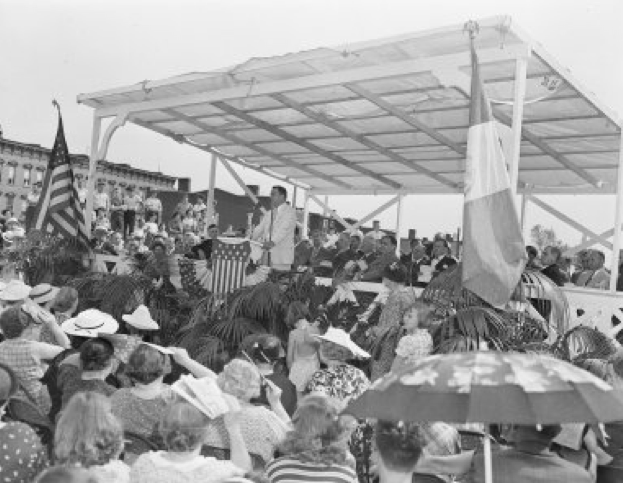 The grand opening was held on August 23, 1939. Photo: NYC Department of Records

Compared to a mountain in Australia, an island in Alaska, and numerous monuments and monoliths in Poland, the soaring bridge could actually be seen as one of Kościuszko’s lesser tributes. Born in 1746 in what is now Belarus (a division formed after the Soviet invasion in 1939), the Polish general and military engineer played an important role in the wars of independence in both his home country and the new United States, where he served in the Continental Army. Said to have been moved to tears by reading the Declaration of Independence, he worked to fortify American defenses throughout the revolution. 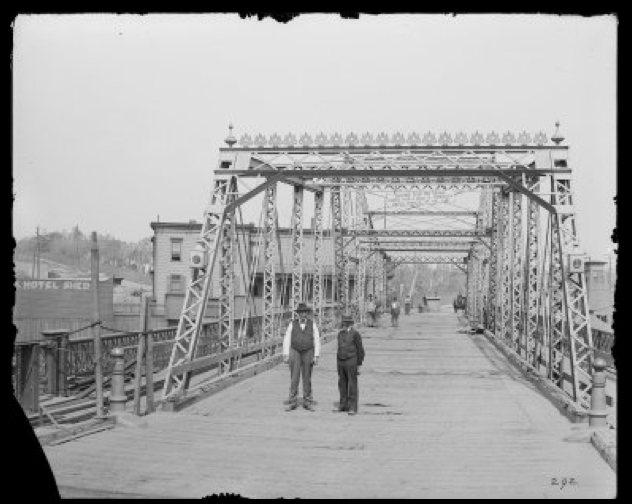 The Meeker Street Bridge, which the Kosciuszko replaced. Photo: NYC Department of Records

Kościuszko would return to Poland after the war and go on to fight in the Polish-Russian War of 1792, and was wounded and then captured by the Russians. After a pardon in 1796, he went back to the United States for a time and then returned to Europe, dying in Switzerland in 1817. Curiously, his body doesn’t rest all in one place, and while his corpse was interred in a church, all his internal organs were buried in a separate Swiss cemetery, save for his heart, which was embalmed and placed in an urn that’s now at the Royal Castle in Warsaw. In his will, he gave his military back pay to Thomas Jefferson, asking that it be used to free slaves and give them the opportunity for an education (it appears Kościuszko’s wishes were not carried out, the wealthy slave-owner Jefferson probably being a bad choice for an executor of such a wish). His lifelong struggle for freedom has made Kościuszko enduringly popular, and his name must have evoked some hope in 1940 for Poles living under occupation–and for Poles living in the United States, worried about their occupied brethren. 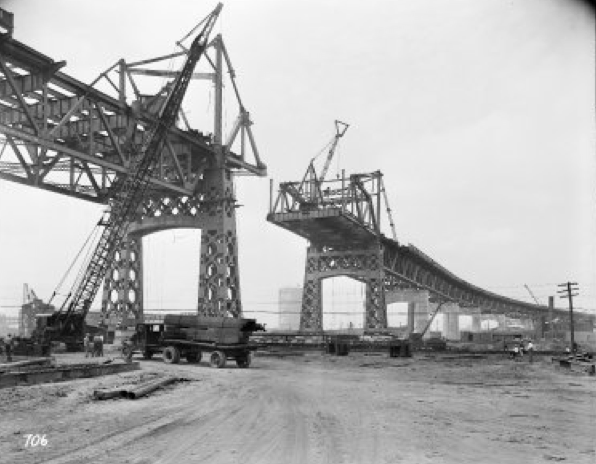 Stretching from one side of Newton Creek to the other. Photo: NYC Department of Records

The 300-foot-long Kosciuszko Bridge was built at 125 feet tall in order for the masts of ships to pass under unheeded (it’s one of only two of the 11 bridges that cross the Newtown Creek and its tributaries to not be movable) and is structured as a truss bridge supported by a series of steel triangles. It’s now a major part of the BQE, seeing about 160,000 cars a day, which is far heavier traffic than it was designed for. Its predecessor, the Penny Bridge built in the 1830s, also had to be replaced due to the mounting need for transportation between the growing communities in Brooklyn and Queens. 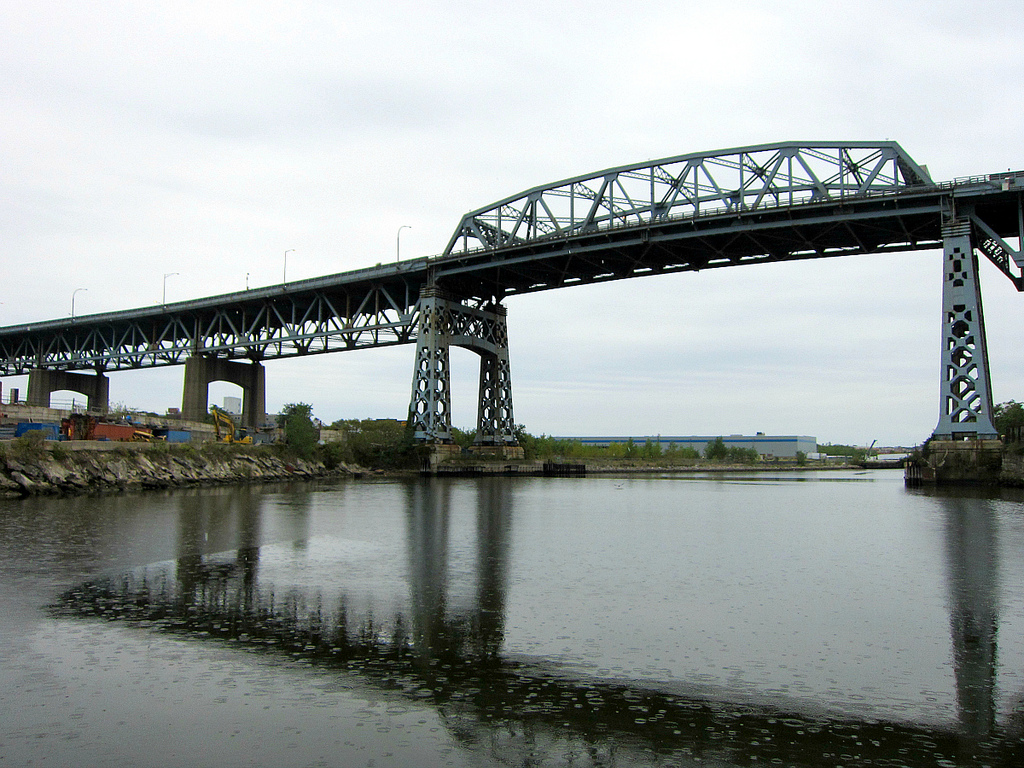 Ferry service across Newtown Creek dates to the late 1600s, when one docked right around what is now Meeker Avenue. Demand was increased by growing industrialization and the massive Calvary Cemetery that opened in 1848 on the Queens side of the bridge, with funeral parties arriving daily by ferry and carriage. The Penny Bridge, one of many bridges to earn that nickname from the price of its toll, linked Newtown (a settlement that became Elmhurst) to the growing Bushwick township, but not without incident. On January 12, 1894, there was an especially grisly bridge collapse when, according to a report by the Brooklyn Daily Standard Union, “100 employees of Queens County factories were tumbled into the cold waters of the creek” when a temporary wooden structure adjacent to the new metal bridge being constructed collapsed under their weight. At least eight of these workers who had been heading home to Brooklyn drowned in the freezing waters, and several others were hospitalized. One victim described the incident to the Brooklyn Eagle: “The only thing I can remember about the breaking of the bridge is that when I stepped out on it it fell asunder and I fell with it into the water. Then the real struggle commenced for the possession of a plank which someone threw into the water to us. Five of us clung to the plank, and no sooner would we get on top than the others would draw us underneath. Finally I was pulled ashore by a fellow workman.”

It was the more contemporary, and equally tragic, 2007 bridge collapse in Minneapolis that compelled New York to examine the condition of its own bridges, with the Kosciuszko Bridge ranked as one of the worst. The replacement bridge is the city’s largest bridge project since the Verrazano-Narrows connecting Bay Ridge to Staten Island, which was completed in 1964, and like any city project of this magnitude it has not been without controversy. A few homes and several industrial and manufacturing businesses adjacent to and under the Kosciuszko have been displaced for construction, and complications arose when it was found that some of the land for the new bridge was once a Native American burial ground. Back in 2008, the state’s Historic Preservation Office made a failed attempt to get the bridge landmarked as “a significant and unusual variation of the Warren truss type bridge,” proposing rehabilitation instead of replacement, although they were eventually convinced otherwise by the DOT.

Despite all this, it looks like the new nine-lane bridge is on track to become part of the Brooklyn cityscape by 2017, at a projected cost of $511,800,000, according to the DOT website. The new Kosciuszko will actually be two bridges side-by-side in a cable-stayed design, which looks a bit like two massive sailboats. Included in the plans are paths for pedestrians and bikers to access in Greenpoint on the Brooklyn side and Maspeth in Queens, so the new bridge will have something the Kosciuszko Bridge has long been without: an opportunity to stop and stare. The view spans three boroughs from the low industrial structures and gleaming new buildings of Brooklyn and Queens up to the imposing towers of Manhattan, with Newtown Creek curving below and the millions of tombs of Calvary Cemetery standing starkly to one side, a rare encompassing vista of the city.