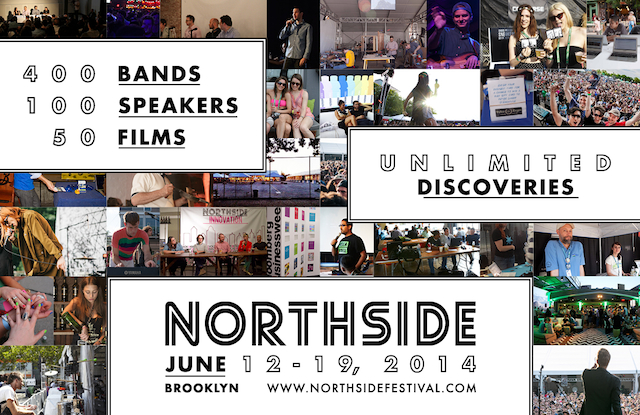 Northside Festival has some important news: You will not be leaving the borough this summer. June 13 and 14 mark the start of the summer-long Northside Summer Concert Series at 50 Kent. The former home of “Williamsburg Park,” this 6,000-capacity venue is ready to soundtrack your favorite season, with the first of two shows pulling double duty as part of this year’s Northside festival. The War On Drugs heads back to New York after a run of sold-out shows and the release of Lost in the Dream (Friday, June 13 – $20 adv/$25 day of). Beirut is back for their second round of Northside Fest glory, as they take the stage for their only Brooklyn date of the summer (Saturday, June 14 – $35). The shows are all ages and rain or shine on the corner of North 12th Street and Kent, and tickets for both are on sale now here. This year’s lineup is better than ever, with CHVRCHES, Talib Kweli, Fuck Buttons, Sharon Van Etten, Albert Hammond, Jr., Perfect Pussy, The Dead Milkmen, Eleanor Friedberger, Pharmakon, Lust For Youth, the live debut of Shamir and more.  Check out the up-to-date lineup of 400+ bands playing this year’s music festival.

Also make sure to head over to Northside Innovation and experience the tech takeover that is happening across the city. Featuring talks from Bloomberg CEO Daniel Doctoroff and Keurig Green Mountain Inc. CIO Kevin Hartley; panel discussions with Buzzfeed President and COO Jon Steinberg and Dwell Editor-in-Chief, Amanda Dameron; CTO of Razorfish Ray Velez and CTO of Refinery 29 Peter Wang discussing how to use technology to tell a story; and many more! See this year’s entire list of innovation panelists and speakers.

And Northside Film is back for its sixth year and proud to once again serve as a home for up-and-coming indie talent. The first wave of films for 2014 includes a number of premieres presented by IFP, Factory 25 and more. Homemakers, directed by Colin Healey, follows a rootless young singer with a knack for destruction. Summer Of Blood, from Onur Tukel, features the director as a man unlucky in love whose confidence is reinvigorated via vampire bite. Find out more details and check out the rest of Northside’s amazing lineup of talent.