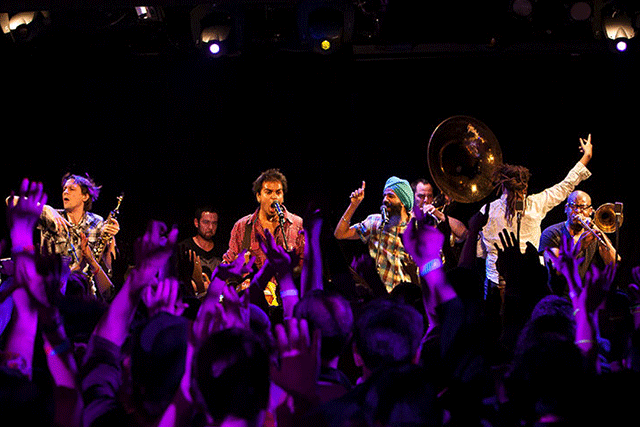 More than 1,300 free concerts will take place all over the city as part of Make Music New York this Saturday. The massive, live music celebration coincides with the longest day of the year and turns unexpected spaces, like streets and sidewalks, into stages for a single day. Among the performances happening here in Brooklyn are a live jazz concert in the Steinberg Family Sculpture Garden inside Brooklyn Museum, which is free with museum admission; and a music crawl along Myrtle Avenue, from Fort Greene Park to Bed-Stuy, featuring over 30 musicians spanning several genres including soul, Latin, R&B, folk, bluegrass, jazz, pop and neo-soul. Possibly the most anticipated performance taking place on Saturday will happen on the central library plaza of BPL: the world premiere of Red Baraat’s 100+ BPM. A performance by the critically acclaimed Bhangra party band, founded by Clinton Hill resident Sunny Jain, is always a good time, and this Saturday, when the group premieres a special interactive work commissioned by NPR Music, should be no exception. Any local musician with a mobile instrument is invited to download the score and participate in the performance, which includes a parade through Prospect Heights that begins and ends on Grand Army Plaza, starting at 4:30pm. This is really a can’t-miss event, but if for some reason you can’t make it, all is not lost–NPR plans to document the performance and put it up online.